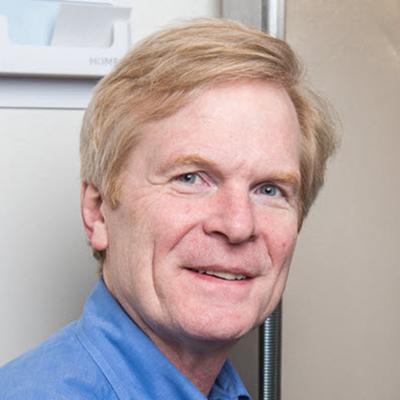 Dr. Walsh is chief of the Division of Genetics and Genomics at Boston Children's Hospital.

Christopher Walsh is interested in genes that regulate the development and function of the human cerebral cortex. Mutations in these genes cause autism and epilepsy, as well as intellectual disability and other learning disorders. Not only are these genes vital to the normal development of the cortex, but also some appear to have been altered evolutionarily to allow the unique aspects of the brain that underlie human cognitive abilities.

What makes us human? It is the job of the human brain to change constantly in response to everything we learn. Yet it is ironically the genes that we inherit from our parents, and that our ancestors inherited from their ancestors, that reproducibly direct the development of a brain with this marvelous ability to change. It should be no surprise that mutations in the genes that construct our cerebral cortex, the seat of our highest cognitive functions, cause crippling consequences such as epilepsy, autism, and mental retardation or other learning disorders. Despite the recent advances in our understanding of the human genome, however, many genetic causes of these conditions remain unknown. Our lab is interested in identifying genes that direct the development of the cerebral cortex, not only because of their disease-related importance but also because they tell us about the normal development and evolution of our brain.

Control of Cerebral Cortical Size
How is the size of the cerebral cortex controlled? Genes essential for normal human cerebral cortical size can be identified by studying families in which the cortex is congenitally small, a condition known as microcephaly (small brain). A significant cause of mental retardation, microcephaly is frequently genetic. We have collaborated with others to define more than 10 genes that cause human microcephaly. Some of these genes (including ASPM, WDR62, CDK5RAP2, CENPJ, NDE1, and KATNB1) regulate components of the centrosome and mitotic spindle that are essential for proper cell division; others (ZNF335, CHMP1A, ARFGEF2, JAM3, QARS, PNKP, TRAPPC9) have diverse cellular roles. Many of these genes ultimately control cell fate, that is, the decision that dividing cells make about whether they continue to divide as progenitor or stem cells or withdraw from the cell cycle and differentiate into neurons. A long-standing and continuing area of interest in our lab is the study of this cell fate decision at a mechanistic level, since it relates to the control of neural stem cells and ultimately controls the size that our brain achieves.

Figure 1: The developing cerebral cortex. The cross section shows the developing human cerebral cortex with dividing progenitor cells labeled in green and blue (in the drawing as well as in the photomicrograph of a developing mouse cortex), with mitotic cells along the ventricular surface at the bottom of the section. Postmitotic neurons (gray in the drawing, and red in the micrograph) migrate from the inside to the outside to form the cerebral cortex. From Lehtinen, M. K., and Walsh, C.A. 2011 Annual Review of Cell and Developmental Biology 27:653–679. © 2011 Annual Reviews.
Figure 2: The diversity of developmental disorders of the human brain. The image illustrates MR imaging of a normal person (in the axial plane, parallel to the brim of a hat) in the center, surrounded by images from 8 different genetic malformations of humans, affecting cell migration, proliferation, or brain patterning. Christopher A. Walsh
Figure 3: Genetic disruption of the human language area near the Sylvian fissure. The figure illustrates an inherited condition, called perisylvian polymicrogyria, because it disrupts the normal folding pattern of the brain, creating abnormal folds, or gyri (polymicrogyria). The main language area in the left hemisphere, known as Broca's area, is most severely affected, with surrounding regions affected more mildly and with the right hemisphere affected symmetrically as well. The disorder reflects a mutation in a noncoding region of the GPR56 gene, which shows functional differences between species, suggesting a potential role in evolution. From Bae, B. I. et al. 2014 Science 343:764–768. © 2014 American Association for the Advancement of Science.
Figure 4: Ferret brain. The image shows labeled progenitor cells and neurons in the brain of a newborn ferret pup. Credit: Matthew Johnson and Peter Wang.

More recently, we identified mutations that cause the brain to be too large, often affecting just one-half of the cortex and causing intractable epilepsy. Study of brain tissue removed from patients to control their seizures shows that the abnormal brain tissue contains mutations that are not always detectable in the blood, but instead arose spontaneously during the development of the brain. These "somatic mutations," analogous to mutations that cause cancer when they occur in dividing cells of the adult, show how dynamic the genome of the progenitor cells is during development of the brain.

Human Brain Evolution
Remarkably, some genes that cause a small brain (microcephaly) when mutated (including ASPM, CDK5RAP2, and CENPJ) show evidence of evolutionary selection in the primate lineage leading to humans, during the period when the brain showed dramatic increase in volume. This relationship suggests that subtle changes in these genes over evolutionary history may have caused dramatic changes in brain size. Since the three genes converge on the centrioles and their control of cell division and cell fate, the control of neuronal cell fate by control of centriole function is a plausible mechanism to regulate brain size over evolutionary time.

The human brain has also developed cognitive functions not represented in other species, and language is prominent among them. By studying a mutation that preferentially disrupts the cerebral cortical region involved in language production (Broca's area), we discovered that the mutation disrupted a noncoding region that normally controls the pattern of expression of the GPR56 gene, which encodes a G protein–coupled receptor that regulates proliferation and normal positioning of cells in the cerebral cortex. The mutation did not disrupt the overall function of the GPR56 protein, but instead disrupted its normal pattern of expression, and we found that different mammalian species, with different structural patterns to the cortex, showed distinct noncoding sequences that directed differing patterns of gene expression, suggesting that evolutionary forces also shaped the pattern of expression of GPR56, which in turn shaped the structural features of the cerebral cortex, suggesting how evolution might have resulted in the diverse patterns of cerebral cortical architecture.

Autism Genetics
Autism is characterized by abnormal social behavior, and changes in social behavior were an essential part of the development of civilization. Autism is difficult to study since it appears to be caused by mutations in many, perhaps thousands, of different genes, so that each affected child is likely to have a different mechanism of causation. To define mutations that confer high risk for autism, we have studied families in which the parents share ancestry, by collaborating with physicians in the Arabic countries of the Middle East, where such shared ancestry is common. This approach requires frequent trips by our research group to Gulf countries, including Saudi Arabia, Kuwait, Oman, Qatar, Turkey, and others. Through this collaboration we have identified many inherited mutations that cause high risk for autism. Surprisingly, some of these recessively acting autism mutations affect protein structure, but other mutations do not disable entire genes, instead deleting noncoding DNA segments that regulate the patterns and levels of expression of essential brain genes. Similarly to the noncoding mutation in GPR56, these noncoding mutations illustrate how noncoding DNA changes can cause unusual forms of disease.

One Brain, Many Genomes
Our finding that some developmental malformations of the brain are caused by mutations that are present in some but not all brain cells (and often not in other tissues at all) has highlighted the fact that each cell in the body has a genome that is different from the next, due to spontaneous mutations that arise inevitably every time a cell divides. We have developed methods to study this systematically by amplifying and sequencing the genomes of single cells from the human brain and investigating the differences between cells at the genomic level. LINE elements, which are active retrotransposons, occasionally become mobilized in dividing cerebral cortical precursor cells and insert into novel locations in the genome. Furthermore, deletions and duplications of segments of the genome can occur during the normal cell divisions that result in the cerebral cortex. Point mutations are by far the most common source of variation between neurons in the brain and seem to occur both during cell division, and in postmitotic cells. In the long term, we are interested in using the catalog of mutations that each single cell shows as a way of reading off the developmental history of the cells in the brain, to trace the patterns of proliferation and cell lineage that create the brain developmentally. We also would like to understand the role of somatic mutations in a variety of diseases beyond just the brain malformations.