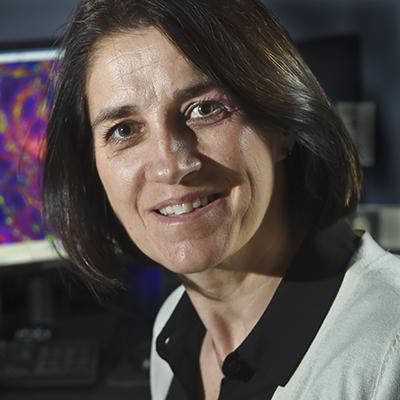 Dr. Jacobs-Wagner is a professor of biology at Stanford University and a faculty fellow with Stanford Chemistry, Engineering & Medicine for Human Health (ChEM-H).

The Jacobs-Wagner laboratory explores the internal organization of bacteria at every level, from the molecular mechanisms involved in its origin, maintenance, and replication in time and space to its function in cellular physiology and morphogenesis.

Life requires cellular organization in time and space, a principle that applies to all branches of the evolutionary tree. Even bacteria, once erroneously perceived as tiny bags of jumbled-up molecules, are polarized, possess a cytoskeleton, order their chromosomes in space, and localize structural and regulatory proteins. They rely on temporal and spatial organization for processes as diverse as cell growth, development, pathogenesis, motility, cell cycle control, cell division, and chromosome segregation. This realization has revolutionized the microbiology field and has resulted in a recent surge of interest in bacterial cell biology. However, this emerging discipline is still in its infancy and much remains to be discovered. How cellular organization is achieved in bacteria remains largely elusive. The acquisition and propagation of spatial information are often tightly coordinated with the cell cycle to ensure the maintenance of this information within the cell population. The mechanisms by which this temporal control occurs are also poorly understood.

My laboratory primarily uses Caulobacter crescentus and Escherichia coli as models to (1) understand the control mechanisms underlying bacterial multiplication; (2) decipher the molecular mechanisms by which bacterial cellular organization is achieved, maintained, and replicated in time and space; and (3) establish how this spatiotemporal information controls the physiology, morphogenesis, and behavior of the cell. In addition, we have recently started to explore the diversity of cell biology among bacteria. For example, we are investigating the cell biology of spirochetes with an emphasis on the Lyme disease agent, Borrelia burgdorferi.

Given the dramatic impact of bacteria on human health and activities, such a fundamental understanding of bacterial biology is critical. This understanding will provide a basis for the rational design of novel antibacterial strategies and for the innovative use of bacteria in medicine, industry, and the environment. For our studies, we use a wide array of quantitative imaging techniques and an arsenal of genetic and biochemical tools as well as mathematical modeling.

Intracellular Partitioning and Directional Motion
Bacteria are infamous for their rapid replication rates, which are in part possible because of robust cell cycle mechanisms ensuring that every division produces a pair of cells with a full complement of genetic material and cellular components. We found that bacteria can partition and pattern their cellular content without using cytoskeletal elements or motors. We recently provided evidence that a ParABS system drives chromosomal segregation in C. crescentus through a simple "DNA-relay" mechanism in which the intrinsic elastic properties of the compacted chromosome provides the translocating force. Ongoing experiments and theoretical work show that the DNA-relay model is applicable to other ParABS systems involved in the transport and patterning of various cargos, including plasmids, and that it can spontaneously generate protein gradients and directional motion. The governing principles are simple and broadly applicable beyond ParABS systems.

Cell Cycle Regulation and Cell Size Homeostasis
For the last five decades, bacteria and eukaryotes have been thought to regulate their cell cycle by sensing a critical size threshold. This paradigm has served as a foundation of our understanding of cell size and cell cycle regulation. Recently, we revisited the critical size model through single-cell analysis. For this study, we developed high throughput image analysis software to extract quantitative information from time-lapse experiments in microfluidic devices. The data show that bacteria such as E. coli and C. crescentus do not sense their size, but instead measure how much they have grown before committing to division. Addition of a constant increment of cell volume between division cycles result in robust cell size homeostasis over generations.

Physical Properties of the Cell and Cellular Dynamics
Macromolecular crowding in the bacterial cytoplasm can have considerable effects on biochemical rates by affecting the mobility of reaction components. The cytoplasm is also polydisperse, with object sizes ranging across four orders of magnitude. In living cells, an additional level of complexity is added by constant metabolic activity, which makes the system to operate far from thermodynamic equilibrium. While in vitro studies have provided much insight into the biochemistry of the cell, a complete understanding of any intracellular process requires measurements of molecular diffusion and interaction in the natural environment (i.e., living cells). Therefore, we are exploring how the physical nature of the bacterial cytoplasm affects cellular dynamics. Through single-particle tracking of protein filaments, plasmids, storage granules, and foreign objects, we have discovered that the bacterial cytoplasm does not behaves like a simple (Newtonian) viscous liquid where normal Brownian motion is expected. Instead, when the cells are metabolically inactive, the cytosol behaves more solid-like, with physical properties that are common among glass-forming liquids close to the glass transition. The "glassy" features of the cytoplasm strongly depend on particle size, such that cellular components of different sizes "perceive" the same environment (i.e., the cytosol) very differently. Remarkably, cellular metabolism fluidizes the cytosol (i.e., makes it more liquid-like), allowing large cellular components to escape spatial confinement. These findings have broad implications for our understanding of not only cellular dynamics but also cell dormancy, a naturally occurring state that is associated with resistance to various stresses (e.g., starvation, temperature fluctuations, antibiotic exposure). Our goals are to identify the physical origin and biological implications of our observations.

The Diversity of Bacterial Cell Biology
It is now well appreciated that the subcellular organization of bacterial cells is critical for cell function and replication. However, most cell biological studies have been restricted to a small set of bacterial models. To start addressing this gap of knowledge, we have initiated a project that examines the similarities and differences in cellular organization across various bacterial phyla. In addition, we are invested in developing and adapting cell imaging tools to probe the cell biology of B. burgdorferi. This spirochete causes Lyme disease, which is the most reported vector-borne disease in the United States. Despite the significance to human health, little is known about the basic biology of this spirochete (or of any spirochete). Our current studies show that B. burgdorferi and Relapsing Fever Borrelia grow and replicate using a novel, distinctive mode of cell wall growth, which  may provide opportunities for development of targeted therapies in the future.

This work is partially supported by grants from the National Institutes of Health.