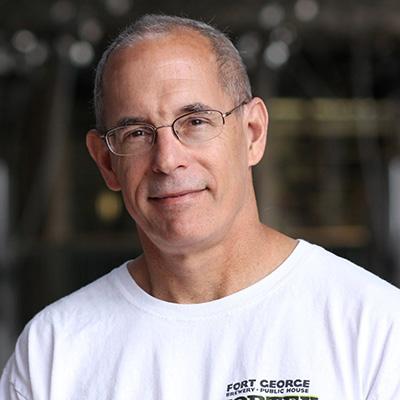 Chris Doe and his lab group study the assembly of the nervous system in the fruit fly Drosophila. This developmental process begins with neural stem cells, called neuroblasts, each of which has the potential to make multiple types of neurons. Doe’s team is looking at how neuroblasts produce these different neurons, and how the neurons “wire up” to form circuits that generate the earliest movements in animals.

Although neuroblasts are destined to produce the full adult nervous system, initially they are naive, and know only their position within the embryo (such as head or body). Soon after forming, however, neuroblasts produce a series of daughter cells that generate different types of neurons. Work by the Doe lab has shown that neuroblasts accomplish this feat by producing a series of transcription factors (proteins that turn genes on or off); each successive daughter neuron inherits a different transcription factor, which gives the cell a unique identity. In this way, a small pool of neuroblasts contributes hundreds of different neurons to the growing brain.

The production of different types of neurons is an essential first step, but it must be followed by the “wiring up” of neurons into neural circuits – much like circuit wiring in a computer. Doe’s group is learning more about this process by using genetic tools to turn the activity of single neurons on or off, and then measuring the response of surrounding neurons. In this way, the scientists can map out the circuitry within the entire fly brain. Ultimately, Doe and his team hope to understand the developmental rules that underlie the assembly of neural circuits, which may someday help clinicians direct human stem cells to form the precise types of neurons needed to repair injured or diseased brains.

Grants from the National Institutes of Health provided support for portions of this work.