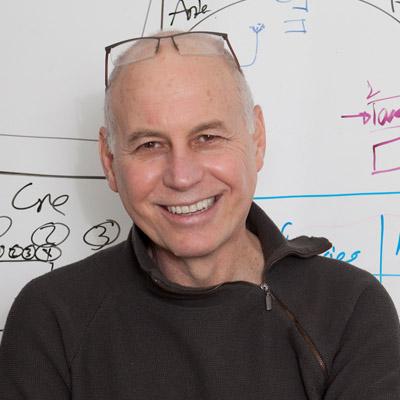 Dr. Zuker is a professor in the Department of Biochemistry and Molecular Biophysics and the Department of Neuroscience at Columbia University College of Physicians and Surgeons. He has been an HHMI investigator since 1989.

The senses of vision, hearing, touch, olfaction, and taste have the critical roles of providing the organism with a faithful representation of the external world. We use a combined molecular, genetic, and physiological approach to investigate the biology of sensory transduction mechanisms in photoreceptors, mechanoreceptors, and taste receptors.

Genetic Dissection of Photoreceptor Cell Function
Phototransduction converts the energy of a photon of light into a signal that the nervous system can understand. Drosophila phototransduction is a G protein-coupled, phosphoinositide-mediated, and calcium-regulated signaling cascade that serves as a model system for a genetic and physiological dissection of G proteincoupled signaling in vivo. Our work has focused on the identification and characterization of most of the proteins involved in this process, including the light receptor molecules, G protein subunits (Gα, Gß, and Gy), effectors (phospholipase C [PLC], calmodulin), transient receptor potential ion channels (TRP and TRPL), arrestins, phospholipid enzymes (CDS, RDGA), kinases (protein kinase C), and phosphatases (RDGC). In this pathway, light activation of rhodopsin activates a G protein, which in turn activates a PLC. PLC catalyzes the hydrolysis of phosphatidylinositol-4,5-bisphosphate into inositol trisphosphate and diacylglycerol, leading to the eventual opening and modulation of the two light-activated ion channels TRP and TRPL. Calcium-dependent regulatory processes, including activation of an eye-specific protein kinase C, arrestins, and calmodulin, mediate deactivation of the light response.

Phototransduction in Drosophila displays two salient features. On the one hand, this is the fastest known G proteinsignaling cascade, taking only a few milliseconds to go from activation of rhodopsin to opening of the light-sensitive channels. On the other hand, this signaling pathway displays very high sensitivity and specificity. How is such speed and specificity of signaling accomplished? The answer lies in the organization of this signaling pathway into a macromolecular complex: Assembly of signaling molecules into transducisomes brings transduction components into close proximity, isolating them away from other pathways and promoting rapid interaction between individual players. This organization assures great temporal resolution to photoreceptor neurons, a feature critical in the visual system of flying organisms. It also creates small microdomains of signaling, where even the smallest changes in the levels of intracellular messengers, such as Ca2+, can modulate light responses. This empowers photoreceptors with the exceptionally fine feedback regulatory system necessary for visual adaptation.

To understand how the subcellular organization of a photoreceptor neuron helps choreograph light responses, we are now focusing on two questions of cellular architecture: (1) How is the phototransduction machinery assembled and organized into signaling complexes? Recently, we showed that signaling complexes are assembled before they are targeted to the light-receptive organelles (the rhabdomeres). Pre-assembly minimizes the number of stray signaling components in the rhabdomeres, while maximizing the number of complete, functional complexes. Perhaps more importantly, pre-assembly assures that the correct signaling machinery is targeted to the appropriate subcellular location. This strategy may be particularly important in highly polarized cells, like neurons, where hundreds to thousands of synapses need to express the pertinent signaling components. (2) How are rhabdomeres of Drosophila photoreceptor neurons formed? In Drosophila, the phototransduction machinery is housed in a specialized membrane organelle, the rhabdomere. Rhabdomeres are composed of ~60,000 tightly packed microvilli, each ~50 nm in diameter and 12 ?m in length. Rhabdomeres, like discs in vertebrate photoreceptors, evolved as a strategy to expand membrane surface so that the cell can house the ~108109 molecules of rhodopsin expressed in photoreceptor neurons. Although discs and rhabdomeres are essential for photoreceptor cell function and integrity, little is known about the molecular details of their biogenesis. We have begun a series of genetic and molecular screens to dissect the process of rhabdomere biogenesis. (A grant from the National Institutes of Health provided partial support for this project.)

Mechanosensory Transduction
Our capacity to hear a whisper across a crowded room, detect our position in space, and coordinate our limbs during a walk is conferred by the mechanical senses. Mechanosensory transduction converts mechanical forces into electrical signals. In flies, mice, and humans, this process is responsible for the senses of proprioception, touch, balance, and hearing. Surprisingly, how a cell senses its mechanical environment at a molecular level remains unclear.

The pivotal element of mechanical senses is a mechanically gated ion channel: when mechanoreceptors are stimulated, mechanically sensitive cation channels open and activate the cell. To identify such a channel, we carried out a series of large-scale genetic screens for mechanoinsensitive flies. Our strategy was to develop a recording technique to study the biophysical properties of Drosophila sensory neurons, isolate mutants defective in mechanoreceptor signaling, and identify those that most likely define transduction molecules.

As predicted, one of the mutants, no mechanoreceptor potential C (nompC), produced animals that were completely uncoordinated due to a dramatic loss of mechanosensory signaling. The nompC gene encodes a novel ion channel essential for mechanosensory transduction; it is a 1,619amino acid polypeptide with homology to TRP channels. We are now focusing on defining the components responsible for orchestrating the gating of NOMPC, understanding the development and assembly of the mechanosensory organelle, and characterizing a large number of additional mechanosensory defective mutants.

Molecular Genetics of Taste
Our sense of taste is capable of detecting and responding to sweet, bitter, sour, salty, and umami stimuli. It is also responsible for distinguishing between these various taste modalities. This discriminatory power provides valuable sensory input: for example, bitter receptors elicit aversive behavioral reactions to noxious substances, while sweet receptors allow recognition of high-caloric food sources.

We have been interested in basic questions of taste signal detection and information coding, and have focused on the isolation and characterization of genes encoding sweet, bitter, and umami taste receptors. The identification of taste receptors generates powerful molecular tools to investigate not only the function of taste receptor cells but also the logic of taste coding: How is tastant specificity and taste discrimination accomplished? What is the topographic organization of sweet, bitter, and umami cells in the various taste buds and papillae? How is the information transmitted and encoded in the afferent nerves? Answering these questions requires the isolation of genes involved in taste signaling, ideally established taste receptors, that can be used to mark the cells, define the corresponding signaling pathways and receptor specificity, generate topographic maps, and trace the respective neuronal connectivity circuits.

In a joint research program with Nick Ryba (National Institute of Dental and Craniofacial Research), we have been carrying out a comprehensive molecular and genetic dissection of taste transduction in mammalian model systems. Recently, we described the isolation of two novel families of taste receptors expressed in subsets of taste receptor cells of the tongue and palate. One of these, the T2Rs, is a family of ~30 different genes encoding mammalian bitter taste receptors. The other family, the T1Rs, contains three members that combine to function as the mammalian sweet (T1R2+3) and amino acid (T1R1+3) taste receptors. This is a striking example of heteromeric G proteincoupled receptors radically altering their selectivity by a combinatorial arrangement of subunits.

Our identification of bitter, sweet, and an amino acid taste receptor provides a powerful platform to help decode the interplay between the various taste modalities and the link between events at the periphery (taste receptor cells) and the central nervous system (perception and behavior). Most T2Rs are coexpressed in the same subset of taste receptor cells, suggesting that these cells are capable of responding to a broad array of bitter compounds but not discriminating between them. In contrast, cells expressing T2Rs are distinct from those that express the sweet and from those that express the amino acid receptors. Thus sweet, amino acid, and bitter tastes are encoded by activation of different subsets of taste receptor cells. A critical next step in defining the logic of taste coding would be to examine the physiology and connectivity pathways of T2R- and T1R-expressing cells in the various taste buds, and to study the impact of genetic ablation, or knockouts, of the different cells and receptor combinations.

A grant from the National Institutes of Health provided partial support for this project.