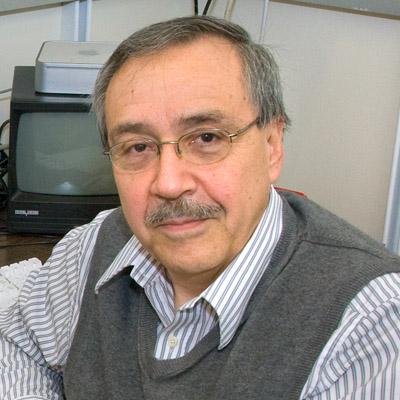 Dr. Bustamante is a professor of molecular cell biology, physics, and chemistry, and the Raymond & Beverley Sackler Chair of Biophysics at the University of California, Berkeley. He is also biophysicist faculty scientist at Lawrence Berkeley National Laboratory.

Carlos Bustamante’s laboratory develops and applies single-molecule manipulation and detection methods, such as optical tweezers, magnetic tweezers, and single molecule fluorescence microscopy to characterize the dynamics and the mechanochemical properties of various molecular motors that interact with DNA, RNA, or proteins. His lab also uses and develops novel methods for superresolution microscopy to study the organization and function of protein complexes in cells.

Applications of Optical Tweezers: Eukaryotic DNA Transcription
We have investigated the physical bases of transcription regulation by nucleosomes. We followed individual yeast RNA polymerase II elongation complexes as they transcribed a DNA template wrapped in a nucleosome. We found that a nucleosome acts as a mechanical barrier that increases the local pause density and prolongs the duration of pauses. These results indicate that the polymerase is unable to actively separate the DNA from the histones and must wait for transient local openings of the nucleosome. The nucleosome acts as a fluctuating barrier that only allows the polymerase to progress when the DNA is unwrapped from the histones. Therefore, the presence of a nucleosome only affects the forward transition without affecting its reverse. By challenging individual polymerase with a nucleosomal barrier, we separately measured the forward and reverse translocation rates. Surprisingly, we found that the forward translocation rate is comparable to the catalysis rate. This finding reveals a linear ratchet mechanism for the nucleotide addition cycle, in which translocation is one of the rate-limiting steps. The resulting kinetic model can be used as a platform to study the regulation of transcription elongation both by specific domains of the polymerase and by various factors, such as elongation factors IIS and IIF, elongin, and ELL.

Mechanics of RNA Translation and Protein Folding
In collaboration with Ignacio Tinoco Jr. (University of California, Berkeley), we have developed a single-molecule helicase-based assay to characterize the dynamics of translation by Escherichia coli ribosomes. Recently, we also developed a new experimental setup, which allows for direct application of force on the ribosome with optical tweezers. We are characterizing the ribosome activity as a function of force for a given reaction coordinate specified by the direction of the applied force. We will also examine the translocation cycle of the ribosome by varying key parameters such as substrate and sequence dependence to understand the effect on ribosome efficiency and fidelity, as well as the behavior of the ribosome in the presence of inhibitors such as aminoglycoside antibiotics.

Figure 1: DNA translocase SpoIIIE organization for the chromosome segregation during Bacillus subtilis sporulation. SpoIIIE (green from conventional microscopy) localizes as a focus at the divisional septum to translocate DNA. Quantitative PALM (orange from super-resolution microscopy) indicates that the focus is composed by hexamers located in the forespore and in the mother cell to form dodecameric channels. Image courtesy of Jae Yen Shin.
Figure 2:. Protein degradation by ClpXP. A: The experimental geometry of the dual-trap optical assay with biotinylated CIpX immobolized on a streptavidin-coated bead (SA) and the DNA-tethered protein substrate attached to another bead coated with anti-digoxigenin (AD). B: Schematic depiction of CIpX intersubunit coordination at saturating (green box) and rate-limiting ATP concentrations (blue box). The subunits in gray correspond to those that do not participate in translocation. During the dwell phase, at least two ATPs are bound to the high-affinity subunits (purple), and one or two more ATPs can bind to the low-affinity CIpX subunits (green) depending on the availability of ATP. During the burst phase, the motor hydrolyzes the bound ATPs, releases phosphate, and translocates the substrate with up to 4 nm bursts. Image courtesy of the Bustamante lab.
Figure 3: Many molecular motors are coordinated oligomeric rings that must adjust their operation in response to regulatory signals. The bacteriophage φ29 packaging motor simultaneously translocates and rotates double-stranded DNA. As the capsid fills, the packaging velocity decreases drastically through allosteric and mechanical regulation at specific steps in the motor's mechanochemical cycle. Remarkably, the overall intersubunit coordination—with four translocating subunits and one regulatory subunit—is preserved. This feat is achieved by concerted changes in the motor's step size and DNA rotation. From Liu, S. et al. 2014 Cell 157: 702-713. © 2014, with permission from Elsevier.

Protein Degradation by ClpXP
AAA+ ATP-dependent proteases play a critical role in the maintenance of cellular protein homeostasis. ClpX is a homohexameric, ring-shaped ATPase that pairs with a barrel-shaped peptidase, ClpP, to form the ClpXP protease complex. ClpX uses the energy from ATP hydrolysis to unfold protein substrates tagged for degradation by threading them into the cavity of ClpP for proteolysis.

In collaboration with Andreas Martin (University of California, Berkeley), we studied the mechanisms of force generation and intersubunit coordination in the ClpXP protease from E. coli to understand how these machines couple ATP hydrolysis to mechanical protein unfolding. Single-molecule analyses reveal that phosphate release is the force-generating step in the ATP-hydrolysis cycle and that ClpXP translocates substrate polypeptides in bursts resulting from highly coordinated conformational changes in two to four ATPase subunits. ClpXP must use its maximum successive firing capacity of four subunits to unfold stable substrates such as green fluorescent protein. The average dwell duration between individual bursts of translocation is constant, regardless of the number of translocating subunits, implying that ClpXP operates with constant "rpm" but uses different "gears."

dsDNA Translocation
Bacteriophage φ29. Many double-stranded DNA (dsDNA) viruses, including the dsDNA bacteriophages and medically relevant herpes- and adenoviruses, package their genome into a preformed viral capsid to near-crystalline density. This process is driven by a powerful molecular motor that couples the energy from ATP hydrolysis to DNA movement, overcoming the large energetic barriers that resist DNA compaction. The viral packaging ATPases belong to a large group of ring NTPases that catalyze a diverse range of important biological tasks in the cell. The DNA-packaging motor of bacteriophage φ29 is an ideal model system for studying viral genome packaging and, more generally, understanding the fundamental operation of the ubiquitous ASCE (additional strand, conserved E) superfamily of ring NTPases. Recently we determined the complete mechanochemical mechanism of the φ29 packaging motor, revealing that this motor displays an extraordinarily high degree of coordination, a coupling of linear translocation with axial DNA rotation, and an unexpectedly complex division of labor among the ATPase subunits. We also demonstrated that the packaging mechanism is regulated by DNA filling. We found that the motor displays extensively altered kinetics in response to the amount of DNA inside the head, yet still maintains its intricate coordination.

SpoIIIE. SpoIIIE is found in the bacterium Bacillus subtilis. Its biological role is to actively translocate DNA to ensure the proper segregation of sister chromatids. SpoIIIE accomplishes this task by coupling the chemical energy provided by ATP to generate mechanical work, pumping the DNA across a cellular membrane at a rate of 4 kbp/s. While generating mechanical work is a common function of ring NTPases, the timing and order of individual power strokes apply this work in a nuanced manner to better suit particular biological tasks. Understanding the mechanical aspects of fast DNA translocation provides a unique insight into the diverse mechanical strategies employed by this large class of molecular motors. An emerging mechanochemical model of SpoIIIE indicates that the motor can tolerate a subset of inactivated subunits bound to nonhydrolyzable ATP analogues, suggesting a coordination model that is not strictly coordinated and is fundamentally distinct from the φ29 packaging motor.

Quantitative Superresolution Spectroscopy
DNA translocase SpoIIIE. Chromosome segregation is an essential process for all living organisms, and it takes place during cell division. To understand the mechanism of chromosome segregation in living cells, we employ the model organism B. subtilis and its motor protein SpoIIIE, which translocates DNA during asymmetric cell division (sporulation). SpoIIIE is a member of the Her/FtsK protein family, which uses ATPase activity to translocate DNA and peptides through membrane pores. To determine the organization and the operational mode of SpoIIIE to translocate DNA, we developed a protein-counting method that uses photoactivated localization microscopy (PALM), which allows both superresolution and quantitative imaging. We used quantitative PALM (qPALM) in combination with genetic tools to demonstrate that SpoIIIE assembles as two coaxial complexes—one in the mother cell and the other in the forespore—around each DNA arm of the circular chromosome. Furthermore, our results allowed us to propose that SpoIIIE assembles as dodecameric channels across the division septum and operates as a bidirectional motor that exports DNA vectorially in response to recognition sequences.

Development of new tools. To make PALM quantitative, we characterized the photophysical properties of two popular irreversible photoactivatable fluorescent proteins (IPAFPs), Dendra2 and mEos2, and established a method to quantify single IPAFP molecules. With qPALM we can obtain quantitative information about the IPAFP-labeled proteins from superresolution images (~25 nm).

To study colocalization of protein by PALM, we developed a novel green photoswitchable fluorescent protein, rsKame, suitable to use in combination with PAmCherry to obtain two-color PALM. We used this two-color method to study the Drp1 protein organization at the fission sites of the mitochondria. Furthermore, to study protein-protein interaction by superresolution microscopy, we are developing bimolecular fluorescence complementation suitable for PALM.

New Insights in Enzyme Catalysis
We used fluorescence correlation spectroscopy to measure the linear dependence of the diffusion coefficient of the enzymes catalase and urease as a function of the reaction rate. We propose that the origin of this phenomenon is the amount of heat released by the reaction during each turnover. According to our model, the reaction produces a heat wave that propagates from the active site of the enzyme, deforming it against the protein-surface interface, giving rise to a recoil effect that effectively propels the enzyme during each catalytic event. Our results suggest a crucial rethinking of the current paradigm of enzyme catalysis: because the energy released is easily one order of magnitude larger than the free energy stabilizing the protein catalyst, it is not unthinkable that many enzymes partly unfold after each catalytic event and that their turnover measured in bulk may include a "dead time" while the enzyme regains its active structure. Similarly, we speculate that some enzymes, particularly those that function as molecular motors, have evolved to channel the energy released after each catalytic event to help propel them along their tracks.

This work has been supported in part by grants from the National Institute of Health and the U.S. Department of Energy, Office of Basic Energy Sciences.