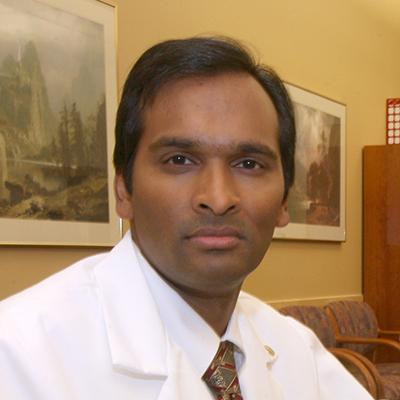 Dr. Chinnaiyan is S.P. Hicks Endowed Professor of Pathology and Professor of Urology at the University of Michigan Medical School. He is also an American Cancer Society Research Professor.

Arul Chinnaiyan is searching for gene fusions that drive the formation of solid tumors, with the ultimate goal of improving the early diagnosis and therapy of common cancers.

With the emergence of the postgenomic era, the blueprint of human disease can now be systematically interrogated at the molecular level. By employing genomic, proteomic, and bioinformatic approaches on clinical biospecimens, we will have the opportunity to identify novel biomarkers and therapeutic targets for human disease. The mission of my lab is to facilitate the discovery, validation, and implementation of candidate target genes/proteins in disease diagnosis, prognosis, and therapy. Our group employs a multidisciplinary and comprehensive approach to the discovery and characterization of disease biomarkers and therapeutics. We embrace the team approach to science and have consistently engaged collaborators from disciplines as diverse as medicine, pathology, bioinformatics, biostatistics, engineering, cytogenetics, and molecular therapeutics.

A central aim in cancer research is the identification of altered genes that are causally implicated in oncogenesis. Several types of somatic mutations have been identified, including base substitutions, insertions, deletions, translocations, and chromosomal gains and losses, all of which result in altered activity of an oncogene or tumor-suppressor gene. First hypothesized in the early 1900s, there is now compelling evidence for a causal role for chromosomal rearrangements in cancer. Recurrent chromosomal aberrations have been thought to be primarily characteristic of leukemias, lymphomas and certain rare soft tissue tumors (sarcomas). Epithelial tumors (carcinomas) that are much more common and contribute to a relatively large fraction of the morbidity and mortality associated with human cancer comprise less than 1 percent of the known, disease-specific chromosomal rearrangements. While hematological malignancies are often characterized by balanced, disease-specific chromosomal rearrangements, most solid tumors have a plethora of nonspecific chromosomal aberrations. It is thought that the karyotypic complexity of solid tumors is due to secondary alterations acquired through cancer evolution or progression. Against this background of chromosomal instability, it is not surprising that recurrent chromosomal aberrations in carcinomas have been difficult to identify. In stark contrast to the hematologic malignancies, genomic instability—leading to mutations, deletions, and amplifications—has been proposed to be the molecular basis of carcinomas. This does not, however, rule out a causal role for gene arrangements in all tumor types, irrespective of their cell of origin.

Two primary mechanisms of recurrent chromosomal rearrangements have been described. In one mechanism, promoter/enhancer elements of one gene are rearranged adjacent to a proto-oncogene, thus causing altered expression of an oncogenic protein. This type of translocation is exemplified by the apposition of immunoglobulin and T cell receptor (TCR) genes to MYC, leading to activation of this oncogene in B and T cell malignancies, respectively. In the second mechanism, the rearrangement results in the fusion of two genes, which produces a fusion protein that may have a new function or altered activity. The prototypic example of this translocation is the BCR-ABL gene fusion in chronic myelogenous leukemia (CML). This finding led to the development of imatinib mesylate (Gleevec), which successfully targets the BCR-ABL kinase. Thus, the identification of recurrent gene rearrangements in common epithelial tumors may have profound implications for the discovery of cancer drugs, as well as for patient treatment.

Earlier, using a bioinformatics approach to select oncogenes from a collection of microarray data (www.oncomine.org), we serendipitously identified a recurrent fusion of the androgen-regulated gene TMPRSS2 to the ETS family of transcription factors in the majority of prostate cancers (over 50 percent). This finding suggested to us that the molecular basis of epithelial cancers is strikingly more similar to hematologic malignancies than previously presumed. Since our initial discovery of TMPRSS2-ERG gene fusion in prostate cancer, subsequent studies have revealed fusion events in other solid tumors such as breast, lung, and melanoma. This has opened up the possibility for the targeted rational treatment of common cancers based on causative lesion rather than the current approach of nonspecific chemotherapies and radiation. The question is, how does one systematically interrogate the genomes of tumors to identify these recurrent gene rearrangements?

A major goal of my laboratory is to scour tumors of different cellular origin comprehensively and systematically to map recurrent gene rearrangements. To accomplish this ambitious and inherently risky goal, we will need to develop and orchestrate novel high-throughput technologies to search the genome of hundreds of tumors. Recent exponential advances in DNA-sequencing technologies in the past few years, as well as reduction in costs, have made it possible to scan the entire genome of cancer patients at once. Combining DNA sequence data with powerful computational biology and bioinformatics tools makes it possible for us to nominate causative mutations in patient DNA in a clinically relevant time frame.

The Michigan Oncology Sequencing Study (MI-ONCOSEQ) is an ambitious initiative in clinical sequencing to identify "actionable" mutation(s) in an individual cancer patient that can be targeted with existing therapies. For a subset of those patients, sequence analyses have suggested readily available therapies that would otherwise not have been considered. More recently, this study has been extended to include pediatric patients.

Although molecularly targeted therapy in cancer is not a new concept, utilizing high-throughput sequencing technology to interrogate the entire genomic landscape of tumors for actionable or informative mutations is a recent development. With our pioneering studies in this arena, we hope to set the standards for routine clinical sequencing in the future as we move toward the era of "precision medicine."

Grants from the National Institutes of Health, the Department of Defense, the Prostate Cancer Foundation, and Stand Up to Cancer provide additional support for this work.