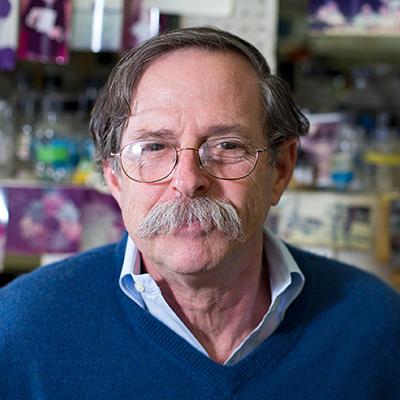 Dr. Horwich is Sterling Professor of Genetics and Pediatrics at Yale School of Medicine.

The final step in information flow from DNA to mature protein involves the proper folding of the newly synthesized polypeptide into its biologically active form. Although the blueprint for a protein’s three-dimensional shape is encoded in its amino acid sequence, a group of proteins called molecular chaperones often provides assistance during the folding process.

Art Horwich has spent much of his career investigating a ring-shaped chaperone called a chaperonin. Using a variety of methods, Horwich and his colleagues have captured snapshots of this protein-folding machine in action. By combining these static images with biochemical tests, the scientists were able to piece together the details of how the cylindrical chaperonin does its job. First, it binds an unfolded protein in a ring via a “greasy” surface, which eventually becomes buried in the folded state. This binding step prevents protein misfolding and aggregation. Second, a co-chaperonin “lid” caps the open end of the ring, encapsulating the unfolded protein, and allows it to fold in solitary confinement, without the possibility of aggregation. After 10 seconds, the lid pops off and the properly folded protein emerges.

Recently, Horwich’s team turned their attention to amyotrophic lateral sclerosis (ALS; Lou Gehrig's disease), a disease often caused by mutations in an enzyme called superoxide dismutase 1 (SOD1). Unable to fold correctly, the mutant protein forms toxic aggregates that disable motor neurons that extend down the body’s limbs and operate the muscles. Horwich and his colleagues have created a transgenic mouse model for ALS and are using it to understand how mutant SOD1 causes neuronal damage and malfunction. They’ve observed that fast-firing motor neurons are most susceptible to cell death. In parallel studies, they have overproduced in neurons of the ALS mice a chaperone, heat-shock protein 110 (Hsp110), that has recently been recognized to function as a rate-limiting component in a disaggregase chaperone complex in the mammalian cytosol. Overproduction of Hsp110 in motor neurons extended the median lifespan of the ALS mice by 30%, and the longest-lived mice lived twice as long.

Grants from the National Institutes of Health supported a portion of this work.

Figure 1: Schematic illustration of the GroEL-GroES-mediated protein folding reaction. Nonnative polypeptide (squiggled line) binds to the apical domains of the open ring of an asymmetric GroEL-GroES complex (first panel).  Polypeptide is released from the apical hydrophobic binding sites of the ring upon binding of ATP (T) and GroES (gray “lid”) to that ring, commencing folding in the sequestered, now-hydrophilic cavity (second panel). Meanwhile, the opposite ring can bind a nonnative polypeptide. After a period of 10-15 sec, the longest step in the chaperonin cycle, the ATP in the cis ring hydrolyzes (T→D, third panel), reducing the affinity of GroEL for the bound GroES, “priming” the ring for dissociation of GroES when ATP binds to the opposite GroEL ring (fourth panel). Ordered addition of GroES to the ring newly bound with polypeptide and ATP (GroES can only bind to a nucleotide-occupied ring) produces a new cis complex on what had been the trans ring, initiating a new folding cycle (fifth panel).  Released polypeptide can have reached native form (N) or a conformation committed to completing folding to the native state in solution (Ic) or may not have reached a committed state (Iuc), requiring a further round of assistance. GroEL thus oscillates back and forth, using one ring of seven ATPs for each cycle, the ATP simultaneously discharging the previous folding-active cis complex while driving formation of a new one. For some substrate proteins, only a small percent of the input molecules reach native form in a given round of folding, and thus many trials are required before all of the input molecules reach native form.
Figure 2: Cross-section of lower cervical spinal cord of a G85R SOD1YFP transgenic ALS mouse at 1 month of age, a time before any symptoms are present (paralysis occurs by 5-6 months of age). The ventral horns in the gray matter (lower portion of the image) exhibit brightly fluorescent neurons (the “holes” correspond to nuclei), some with aggregates in them (arrowed), confirmed by electron microscopy studies. Neurons containing such aggregates are likely to be subject to cell death, dropping out of the motor circuit, leading eventually to paralysis.