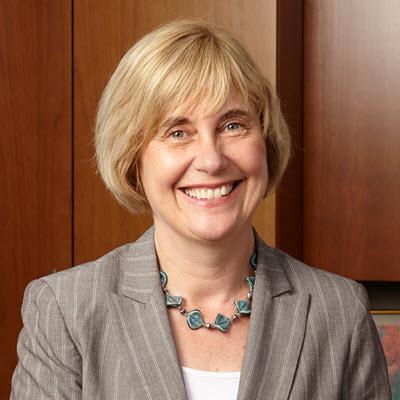 Dr. Pyle is William Edward Gilbert Professor of Molecular, Cellular and Developmental Biology and a professor of chemistry at Yale University.

Anna Marie Pyle studies RNA structure and RNA recognition by protein enzymes. Her lab uses a combination of experimental biochemistry and crystallography to study the architectural features of large RNA molecules, such as self-splicing introns and other noncoding RNAs. This is accompanied by complementary work on RNA-dependent ATPase enzymes that bind and remodel RNA structures, with an emphasis on proteins that are involved in viral replication and host innate immune response.

In the Pyle Lab, we focus on two related questions: (1) How do large RNAs assemble into specific, stable tertiary structures? (2) How is RNA recognized and remodeled by ATP-dependent enzymes in the cell? Our studies involve a combination of solution biochemistry, enzymology, crystallography, and cell-based functional approaches. In parallel, we develop new computational methods for solving and analyzing RNA structures.

Group II Introns and Other Large RNA Tertiary Structures
Our studies of RNA tertiary architecture have focused on group II introns, which are large self-splicing ribozymes that are essential for gene expression in many organisms. Second only to the ribosome in size, group II introns have provided key insights into our understanding of RNA structure and evolution.

Initially, my laboratory used solution biochemistry and enzymology to characterize the chemical reaction mechanisms and architecture of group II introns. In parallel, we sought a stable, homogeneous group II intron suitable for atomic structural studies and were finally successful in crystallizing and solving the structure of a group IIC intron from the bacterium Oceanobacillus iheyensis (Oi IIC, ~400 nucleotides in size). This molecule, which is among the largest free RNA structures ever solved, revealed new architectural motifs and novel strategies for catalysis by RNA molecules (Figure 1, left). 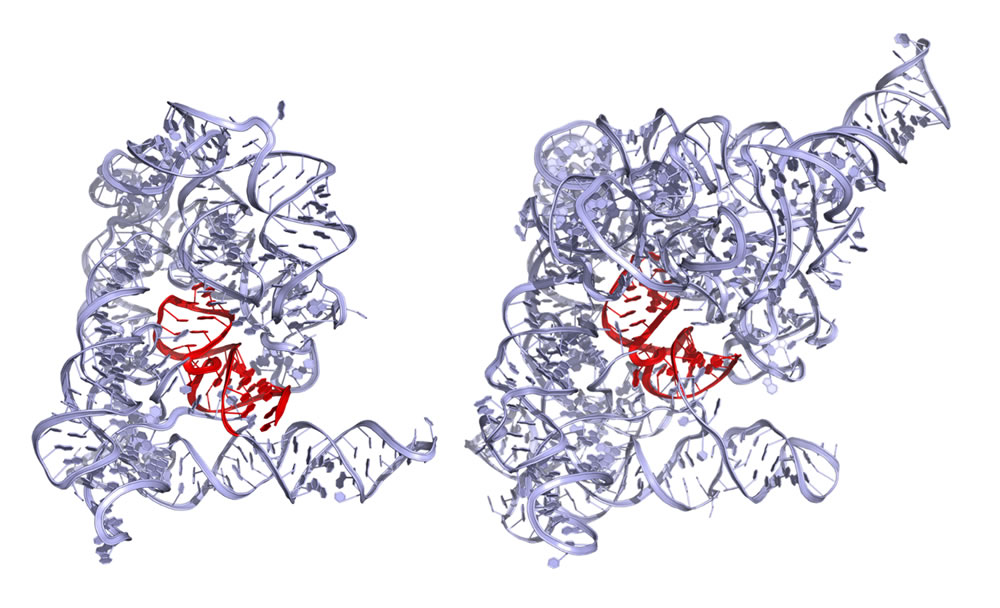 We have since solved the Oi IIC structure as it moves through the stages of splicing, showing that both steps are catalyzed by a conserved RNA stem loop (domain 5, red in Figure 1) that contains a reactive metal ion cluster composed of magnesium and potassium ions. In addition, we captured a conformational change that occurs between the two steps of splicing, allowing the active site to exchange splice sites and carry out multistep reactions. We have solved the structures of folding intermediates that are essential for the group II intron assembly pathway, thereby elucidating first principles of RNA tertiary folding. Finally, we have adapted homology-modeling programs for studies of RNA, enabling us to visualize the structures of much larger RNA molecules, such as the ai5 group IIB intron (Figure 1, right). This work has contributed to the development of technologies for solving structures of even larger RNA molecules, such as long intergenic noncoding RNAs (lincRNAs). Our lab is now playing a key role in elucidating lincRNA structure and connecting it with function.

Protein Machines for RNA Remodeling and Sensing
Eukaryotic cells express a large family of RNA-dependent ATPases (SF2 ATPases/helicases) that contribute to every aspect of RNA metabolism. Many of these proteins unwind RNA structures during the remodeling of RNA-protein complexes (acting as helicases), while others stabilize RNA structures (behaving as annealing enzymes), and yet others serve as biosensors and signals for the detection of pathogenic RNA (signaling enzymes). These proteins share certain architectural elements, including a common set of conserved domains that selectively bind RNA targets and create an active-site cleft for ATP binding and hydrolysis. The ATP-dependent motions of this cleft are coupled to mechanical functions, such as the unwinding of RNA, or domain motions that promote cell signaling. In studying the nanomechanical behavior of these proteins, we have explored new areas of molecular virology and immunology.

We are particularly interested in SF2 RNA helicase enzymes that play a role in the life cycle of viruses. For example, the NS3 helicase from hepatitis C virus (HCV) plays a key role in the replication and packaging of HCV. We have elucidated the stepwise mechanism by which NS3 unwinds RNA molecules, and we have used it as a paradigm for understanding ATP-powered translocation within the SF2 family. We have begun to dissect the network of interactions between NS3 and other components of the HCV replication complex, and we have shown that this multifunctional enzyme plays many roles in HCV pathogenicity.

During early studies of a protein involved in cancer reversion (MDA-5), we identified a subfamily of SF2 proteins that displays highly unusual behavior. The ATPase activity of these proteins, which include proteins MDA-5, RIG-I, and metazoan Dicer, is specifically stimulated by duplex RNA, rather than single-stranded RNA, and it is not accompanied by RNA unwinding. Family members such as RIG-I and MDA-5 play a central role in the human innate immune system, and Dicer proteins are key components of small interfering RNA (siRNA)- and microRNA (miRNA)-processing systems. Despite the biological significance of all these proteins, there was no high-resolution information on their structures or RNA binding interfaces and limited information on their enzymology. 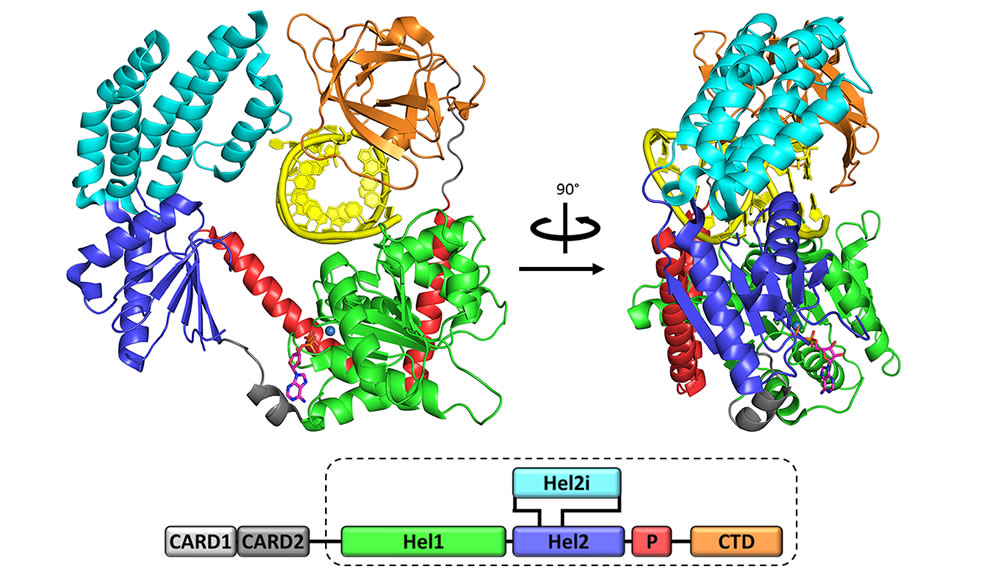 We set out to change this with an intensive study of RIG-I, a surveillance protein that detects and responds to viral RNA infection within vertebrate cells. Through in vitro and in vivo experiments, we demonstrated that a 5'-triphosphorylated 10–base pair RNA duplex is sufficient for activating RIG-I and inducing a robust interferon response in vertebrates. We solved the crystal structure of RIG-I in complex with a variety of ligands, revealing an intricate machine that mechanically couples viral RNA binding with ATPase activity and signaling (Figure 2). This work paves the way for the design of new therapeutics that modulate the innate immune response and for new vaccine adjuvants. It also lays the groundwork for mechanistic understanding and pharmacological control of Dicer and related proteins.

This work was also supported by grants from the National Institutes of Health.