Structural Biology of Microbes and Viruses, and Ongoing Development of Electron Cryotomography

Grant Jensen's laboratory uses state-of-the-art cryogenic electron microscopy (cryo-EM) techniques to understand the structure and function of large protein machines and their arrangement within cells. Projects range from cryotomography of viruses and cells to ongoing technology development to further push the boundaries of cryo-EM.

Microbial Cell Biology
Although thousands of bacterial genomes have now been sequenced and a variety of high-throughput "omic" technologies are revealing gene expression patterns and how the various gene products mediate metabolism, our comparative ignorance about the physical and mechanical processes that occur in the course of the bacterial life cycle is surprising. We still do not know, for instance, how bacteria generate and maintain their characteristic shapes, establish polarity, organize their genomes, segregate their chromosomes, divide, and in some cases move. In some sense, the "omic" technologies are giving us lists of parts and reactions, but bacterial cells are not merely bags of enzymes—structural and mechanical details are also needed.

Fortunately, the development of electron cryotomography (ECT) has allowed us to obtain unprecedented three-dimensional (3D) views of proteins, viruses, and even whole cells in near-native states to molecular (~2-5 nm) resolution. One of our main research interests is to study the structures and functions of the macromolecular machines that, among other things, shape and specialize prokaryotic cells, drive their growth and division, propel them through their environments, and allow them to attack their competitors. 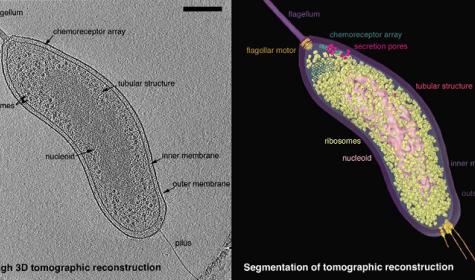 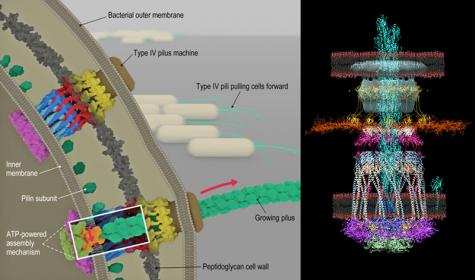 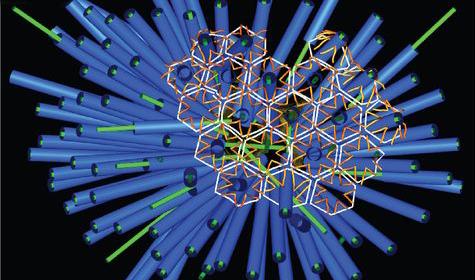 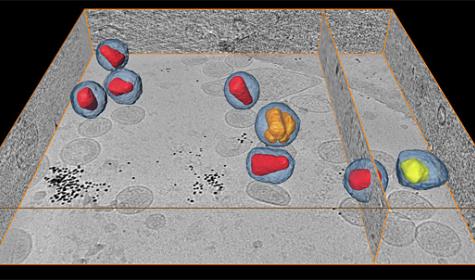 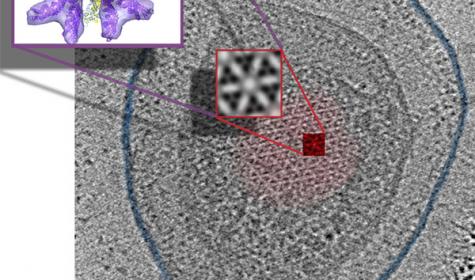 Figure 5: Zoom series of a bacterial chemoreceptor array. The background grayscale image is a single slice through a cryotomographic reconstruction of an array inside a Salmonella minicell. The intermediate-resolution image is a subtomographic average of many "unit cells." The most enlarged image is a fit of various crystal structures into the EM average. Image: Ariane Briegel

One such complex is the type IV pili (T4P) motility machine that Myxococcus xanthus cells use to extend a long pilus that attaches to a surface or other cells and subsequently retracts, pulling the cell forward. We used ECT and subtomogram averaging to dissect the T4P, systematically knocking out or tagging each of the dozen components and mapping the corresponding changes in density. This allowed us to dock atomic structures of individual components to produce a pseudo-atomic model of the entire complicated machine, yielding new insights into its mechanism.

Other bacteria propel themselves with flagella. We published the first structure of an entire flagellar motor, and later reconstructed motors from several different species, revealing how each species has adapted the motor to its own purposes. The Treponema primitia motor, for example, is wider in diameter and has more stator studs, adaptations that could "gear" it down to produce the higher torque a spirochete might need to rotate the entire cell as it burrows into tissue.

Directing motility is an array of chemoreceptors embedded in the cell membrane. We used ECT to generate the first 3D structures of chemoreceptor arrays in intact cells, revealing that the receptors are arranged as a hexagonal lattice of trimers of receptor dimers. We then showed that the basic architecture of chemoreceptor arrays is conserved across bacteria, and even archaea. Ongoing work focuses on understanding the mechanism of signal transduction and the molecular basis of the system’s remarkable sensitivity.

Another incredible macromolecular machine is the type VI secretion system (T6SS), which our images revealed to be a “spring-loaded molecular dagger” that many bacteria use like harpoons to kill their neighbors. We also observed an unexpected related structure produced by Pseudoalteromonas luteoviolacea – a micron-scale ordered array of proteins related to the T6SS. These porcupine-like structures act as a signal for marine tubeworm larvae to settle and differentiate, but their purpose for the bacterium remains unknown. Current work in the lab focuses on these and other bacterial secretion systems.

For many decades, cytoskeletal filaments were rarely seen in traditional thin-section electron microscopy (EM) images of bacteria, so it was thought that prokaryotes lacked a cytoskeleton and that this was one of the hallmark differences from eukaryotes. More recently, however, bacterial homologs of actin, tubulin, and intermediate filament proteins have been identified, and fluorescent light microscopy has confirmed that these and other proteins localize in filament-like patterns in vivo. We and others have now used cryotomography to directly visualize many different cytoskeletal filaments and filament bundles in a variety of species, confirming that bacteria do indeed have elaborate and extensive cytoskeletal systems. We even helped identify new elements, like bactofilins, that are unique to bacteria.

ECT can reveal filaments previously invisible, but it can also tell us which filaments are missing. More than one hundred studies using fluorescence microscopy suggested that many proteins, most notably MreB, form long helical filaments wrapping around bacterial cells. Using ECT, we found that corresponding filaments are not found in native cells and, in at least one case, were an artifact of the fluorescent tag.

On the subject of filaments, we aim to understand cell division across all three kingdoms of life. Bacteria and most archaea use FtsZ to divide. We were the first to image FtsZ filaments directly inside cells, in Caulobacter crescentus. Rather than a continuous ring, we observed short arc-like filaments, supporting a constrictive mechanism based on conformational changes in FtsZ. Current work in our lab aims to further elucidate the mechanism of FtsZ in cell constriction.

Other archaea, and most eukaryotes, use ESCRT to divide, but its constrictive mechanism is similarly unknown. We imaged dividing Sulfolobus acidocaldarius cells by ECT and observed a belt of filaments, suggesting a spiraling constriction mechanism. Ongoing work aims to further characterize the mechanism of ESCRT.

Animal and yeast cells use a contractile ring of actin and myosin to constrict their membrane during cytokinesis. We are currently using ECT and coarse-grained molecular dynamics simulations to understand the contractile mechanism of the actomyosin ring.

Another surprising revelation that came from imaging bacteria is their sophisticated interior organization. Our lab has described the structures of carboxysomes (organelle-like polyhedral bodies that sequester RuBisCO), storage granules, magnetosomes, and protein diffusion barriers in the stalk of Caulobacter crescentus. Current work focuses on the structures of other functional compartments of bacterial cells, including the nucleoid, or genome-containing region.

The largest macromolecule inside many bacteria is the peptidoglycan sacculus that buttresses their membranes against environmental and turgor pressure. Despite decades of intensive research, the architecture of the sacculus was debated. Using ECT, we showed that glycan strands are arranged circumferentially in both Gram-negative and Gram-positive bacteria. Another big question was how cells containing a cell wall can grow: in order to insert new material, the sacculus must be cut, without destroying its integrity. It was thought that a long-range scaffold, perhaps MreB, was required to coordinate this process. Using ECT, molecular dynamics, and coarse-grained simulations, we showed that no such long-range interactions are needed; local coordination of remodeling enzymes alone is sufficient. Current work focuses on understanding other aspects of morphogenesis, such as how bacteria recover their shape after it has been lost.

Bacterial cells are typically classified according to Gram staining. Gram-negative cells usually have two membranes and Gram-positive cells one. Our ECT studies of sporulating bacteria led to a surprising insight into the relationship between these architectures. Imaging a rare endospore-forming Gram-negative bacterium, we observed that the inner membrane of the mother cell is transformed into the outer membrane of the germinating spore. This interconversion suggests an evolutionary source of the Gram-negative outer membrane and leads to the intriguing hypothesis that the last universal common ancestor could have been a spore.

Structural Biology of HIV
In addition to imaging small cells, we are also investigating the structural biology of the human immunodeficiency virus type 1 (HIV). HIV is unusual: although each virus has the same basic membrane and protein layers, each virus is unique, making standard structural determination methods such as X-ray crystallography or EM-based single-particle analysis ineffective. Thus, while there are already hundreds of structures of individual HIV protein domains available in the Protein Data Bank, many questions remain about how these assemble to form a virus and how subsequent protein modifications drive maturation. In collaboration with Wesley Sundquist (University of Utah), we used cryotomography to determine the 3D structures of the immature and mature forms of HIV. This work confirmed that the Gag lattice is organized into concentric spherical shells with hexagonal packing, but the 3D images also showed that the shells are incomplete: the Gag lattice is a patchwork of loosely connected hexagonal nets separated by regions of disorder or vacancy. By computationally extracting individual unit cells from just the highly ordered patches, we produced an average structure of a Gag hexamer, which suggested that the SP1 (spacer peptide 1) forms a lattice-stabilizing six-helix bundle. This explains why proteolysis between the capsid and SP1 during maturation triggers rearrangement, and why certain drugs that bind SP1 block maturation. In other work, we found that the cone angle of the mature capsid shell matches the predictions of the fullerene cone model, and observed intermediates that support a “curled sheet” model of assembly. Much work remains to be done to fully understand the structure and assembly of this important virus.

Technology Development
Cryo-EM is a relatively young field, and we are working to further improve it. We have, for example, described a new cryogen mixture that facilitates plunge-freezing, shown that liquid nitrogen is a better coolant than liquid helium, characterized the first stage for routine dual-axis tilting, automated sequential tilt-series acquisition, developed a new method for denoising images, developed a standard to determine handedness for helical objects, and developed an automated data processing pipeline for high-throughput cryo-EM. Our lab has already collected more than 25,000 tomograms of more than 200 different specimens. Recognizing that this wealth of information from our group, and others, is wasted without a way to curate it, we developed the Caltech Tomography Database, a secure, searchable repository tailored to 3D imaging datasets.

A major limitation of ECT is identifying an object of interest in a visually crowded tomogram. Our lab has pioneered cryogenic light and electron microscopy, and we were the first to use it to identify a subcellular object. To increase the localization precision, we developed cryogenic super-resolution light microscopy (cryo-PALM). Ongoing work in the lab is focused on expanding the reach of ECT to any structure in any cell.

This work is also supported by the National Institutes of Health, the Beckman Institute at Caltech, the Agouron Institute, the Gordon and Betty Moore Foundation, and the John Templeton Foundation.