Internal Representations of the Olfactory World

Richard Axel's laboratory is interested in the representation of olfactory information in the brain and the neural mechanisms that translate these representations into appropriate innate and learned behavioral responses. A randomly distributed population of sensory neurons in the olfactory epithelium is consolidated into a discrete stereotyped map of neural activity in the olfactory bulb. Stereotyped projections from the olfactory bulb to the cortical amygdala mediate innate aversive and appetitive behavioral responses to odors. Distributed, unstructured projections to the piriform cortex implicate this cortical structure as a mediator of learned olfactory behavior. Random input to pyramidal neurons of the cortex allows the organism to contextualize a rich diversity of novel sensory experiences, a feature consistent with the role of this brain center in mediating learned olfactory associations and behavior. Our studies reveal that the anatomic organization and functional logic of olfactory circuits in Drosophila is remarkably similar to the olfactory system of mammals, despite the 600 million years of evolution that separate the two organisms.

Olfactory sensory systems transmit information to the brain, where it is processed to create an internal representation of the external world. This internal representation must then be translated into appropriate innate and learned behavioral output. Olfactory perception is initiated by the recognition of odorants by a large repertoire of receptors in the sensory epithelium. Individual sensory neurons in mice express only 1 of 1,500 different receptor genes. Neurons expressing a given receptor are distributed randomly within zones of the epithelium but project with precision to two spatially invariant glomeruli in the olfactory bulb. Thus a transformation in the representation of olfactory information is apparent in the bulb where the dispersed population of active neurons in the sense organ is consolidated into a discrete spatial map of glomerular activity.

The Organization and Functional Logic of Olfactory Circuits in Mammals
We have developed a tracing strategy to define the neural circuits that convey information from individual glomeruli in the olfactory bulb to higher olfactory centers. In the cortical amygdala, we observe that the spatial order in the olfactory bulb is retained but transformed: individual glomeruli project to broad but spatially stereotyped domains. Spatial order in the bulb is discarded in the piriform cortex. Axons from individual glomeruli project diffusely to the piriform without apparent spatial preference. The identification of stereotyped projections to the amygdala and unstructured, distributive projections to piriform cortex  provides an anatomic substrate for the generation of innate and learned olfactory behaviors.

We have devised genetic strategies to discern whether innate odor-driven behaviors are mediated by projections from the olfactory bulb directly to cortical amygdala. Photostimulation of mitral cell terminals expressing the chloride pump, halorhodopsin, in the cortical amygdala selectively silences bulbar input to this brain region. Optically induced silencing of input from the bulb to the cortical amygdala dramatically inhibits innate aversive and appetitive responses to specific odors. We have also employed the promoters of the activity-dependent gene, arc, to decorate and manipulate neurons responsive to odors that elicit innate responses. Optical activation of these labeled neurons leads to appropriate behavioral responses that recapitulate the response to odors. Thus the representation of specific odors in cortical amygdala is both necessary and sufficient to elicit innate olfactory-driven behavioral responses.

In contrast, individual glomeruli project diffusely to the piriform cortex without apparent spatial preference, implicating this cortical structure in learned olfactory behavior. In accord with anatomic tracing, optical imaging of odorant responses in the cortex reveals that the piriform discards spatial segregation and returns to a highly distributed organization in which different odorants activate unique but dispersed ensembles of cortical neurons. Moreover, neurons in piriform cortex exhibit discontinuous receptor fields, and neurons responsive to a given odorant are distributed without apparent spatial order. This representation suggests organizational principles that differ from those in neocortical sensory areas where cells responsive to similar stimulus features are clustered and response properties vary smoothly across the cortex.

These anatomic and physiologic observations are consistent with a model that invokes the random convergence of excitatory inputs from mitral cells onto piriform neurons such that each piriform neuron would sample a random combination of glomerular inputs. If the connections from bulb to cortex are indeed random, then the representation of the quality of an odor, or its valence in piriform, must be imposed by experience. We have devised an experimental strategy that permits us to ask whether the activation of an arbitrarily chosen subpopulation of neurons in piriform cortex can elicit different behavioral responses dependent upon experience. We observe that an exogenously generated network composed of a small ensemble of piriform neurons, activated in the absence of sensory input, is sufficient to elicit one of multiple, learned behavioral outputs. These data suggest that different odors activate unique but random ensembles of piriform neurons and each representation will acquire meaning by virtue of learning or experience allowing the organism to respond appropriately to a variable and unpredictable sensory world. 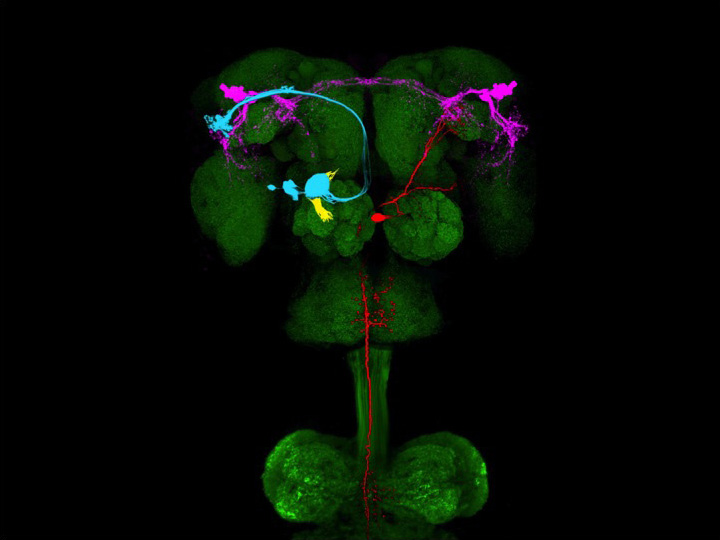 The Organization and Functional Logic of Olfaction in Flies
Our studies have revealed that the anatomic organization and functional logic of olfactory circuits in Drosophila is remarkably similar to the olfactory system of mice, despite the 600 million years of evolution that separate the two organisms. In Drosophila, neurons expressing a given odorant receptor are distributed throughout the antenna but converge on spatially invariant glomeruli in the antennal lobe, the homolog of the mammalian olfactory bulb. As in the mouse, olfactory information transmitted from the antennal lobe to higher brain centers bifurcates: one branch exhibits spatially invariant projections in the lateral horn, and a second branch projects diffusely to the mushroom body, a structure required for learned olfactory responses. This anatomical and functional bifurcation provides an anatomic substrate upon which to consider the generation of various forms of olfactory-driven behavior.

We have identified a neural circuit in the lateral horn responsive to cVA, a pheromone that elicits innate, sexually dimorphic behaviors. We have combined neural tracing using an improved photoactivatable green fluorescent protein (PA-GFP) with electrophysiology, optical imaging, and laser-mediated microlesioning to map this circuit from the activation of sensory neurons in the antennae to the excitation of descending neurons in the ventral nerve cord. This circuit is concise and minimally comprises four neurons, connected by three synapses. Three of these neurons are overtly dimorphic and identify a male-specific neuropil that integrates inputs from multiple sensory systems and sends outputs to the ventral nerve cord. This determined neural pathway suggests a means by which a single pheromone can elicit different innate behaviors in the two sexes.

The responses to most sensory stimuli, however, are not innate but adaptive, allowing the organism to respond appropriately to a variable sensory world. In the fly, the mushroom body is considered the associative center that translates olfactory sensory information into learned behavioral responses. We have characterized a neural circuit that transmits information from individual glomeruli in the antennal lobe to the principal neurons of the mushroom body, the Kenyon cells. We have developed anatomic tracing techniques to identify the complement of glomerular inputs that converge onto 200 individual Kenyon cells. The glomerular inputs to individual Kenyon cells exhibit no discernible organization with respect to their odor tuning, anatomic features, or developmental origins. As in the piriform cortex of mammals, each Kenyon cell receives information from a different and apparently random combination of glomeruli. This organization of glomerular input enhances the diversity of odor representation and allows the fly to impart meaning to novel olfactory experiences, features consistent with the role of the mushroom body in mediating learned olfactory behaviors.

This work is supported in part by a grant from the Mathers Foundation.