Exploring the Role of Replicative Stress in Cancer and Aging

Dr. Fernández-Capetillo uses the mouse as a model system to explore how replicative stress affects cancer and aging. He tries to use this knowledge to design cancer therapies and to discover life-extending strategies.

DNA Damage: A Source of Cancer and Aging
DNA damage is the source of mutations that initiate cancer. In addition, we now know that the gradual accumulation of DNA damage, particularly when it occurs in stem cells, is largely responsible for the decline of tissue regeneration capabilities that are associated with aging. In this context, a significant focus of recent biomedical research has been dedicated to understanding how cells repair and respond to DNA damage. As a result, we now have a reasonably good understanding of the molecular mechanisms that safeguard genomic integrity. However, an important question that remains to be resolved is which one(s) is/are the key source of endogenous DNA damage that limits our lifespan. Eroded telomeres, reactive oxygen species, chromosome breaks—all have been postulated as the source of endogenous damage that is responsible for aging. Still, no definitive answer is available about the primary source of DNA damage that drives aging in living organisms. Within this arena, my laboratory investigates the impact of a different kind of genomic insult, which is linked to DNA replication and therefore inherent to life, and which is widely known as replicative stress (RS).

What is Replicative Stress and How do Cells Deal with It?
In a few words, RS stands for the accumulation of abnormal amounts of single-stranded DNA (ssDNA) at sites of DNA replication. This situation can easily occur if the speed of the DNA polymerase decreases so that it becomes insufficient to "coat" all the ssDNA that is being exposed by DNA helicases. The risk carried by the ssDNA molecule is that it is devoid of the protection provided by nucleosomes or by the complementary DNA strand and is therefore more exposed to conditions that can challenge DNA integrity. In addition, ssDNA can find homology and anneal with distant parts of the genome, which can initiate improper recombination events. As a result, cells have evolved a complex circuitry that detects, signals, and tries to minimize the presence of ssDNA; it is known as the RS response (RSR). 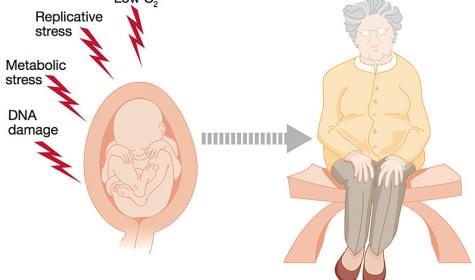 Figure 1: Intrauterine programming of aging... The figure illustrates our proposal that intrauterine distress can affect future aging. An interesting corollary to this finding is that, perhaps, it suggests that conditions that limit fetal stress could also have the potential to extend mammalian lifespan. From Fernandez-Capetillo, O. 2010. EMBO Reports 1:32-36. © 2010 European Molecular Biology Organization. 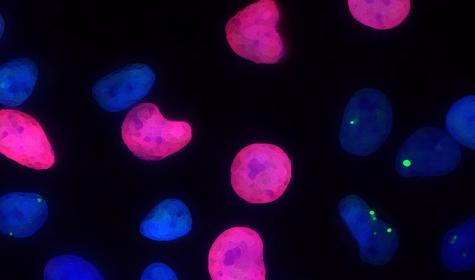 Figure 2: ATR inhibitors generate replicative stress... The figure represents a typical observation of the effect of ATR inhibitors on human cells. Exposure to these drugs generates considerable amounts of RS, which can be detected as cells with a pan-nuclear phosphorylation of histone H2AX (in red). Image: Luis I. Toledo

At the molecular level, the RSR starts with the stepwise activation of ATR and Chk1 kinases that, through phosphorylation of numerous targets, protect against RS and simultaneously activate cell cycle checkpoints that limit the expansion of RS-harboring cells. Importantly, every time a cell replicates its DNA there is a certain degree of ssDNA exposure, so that there is no such a thing as "stress-less replication" but rather different degrees of RS. This process is best exemplified by the observation that both ATR and Chk1 are essential genes for mammalian development, which underscores the need for an active RSR even in the absence of exogenous sources of DNA damage. The essential nature of these kinases is an important limitation in genetic studies on the mammalian RSR, and a significant part of my own work is dedicated to engineering tools that can overcome this problem.

Our Contribution to the Role of RS in Cancer and Aging
My introduction to the field of the DNA damage responses occurred during my postdoctoral research with Andre Nussenzweig at the National Cancer Institute in Bethesda, Maryland. The laboratory work focused on how cells signal and repair DNA double-stranded breaks (DSB) and its relevance in mammalian health. During this period, my own work was dedicated to evaluate the mechanisms by which histone modifications could contribute to the DSB response (DDR), focusing on the role of histone H2A.X phosphorylation (also known as γH2AX). That work led me to propose a functional model for irradiation-induced foci, suggesting that these structures are relevant only in the presence of low numbers of DSB. I also revealed that H2AX phosphorylation caused chromatin compaction and transcriptional silencing during spermatogenesis, a role that my group proposed could also take place in the irradiation-induced foci observed in somatic cells, which has now been verified.

In contrast to the numerous studies on the ATM- and Chk2-dependent DDR, understanding of the RSR was clearly lagging behind. Again, the essential nature of ATR/Chk1 had severely limited the field. However, at about the same time I was opening my independent laboratory in 2005, two groups reported that cancer-associated mutations could generate RS, suggesting that it could be at the very root of cancer development. Thus, I began by trying to develop tools to study RS in mammals that could overcome the problem of lethality. First, we generated a cell system in which we could activate ATR at will, in a controlled manner, and in the absence of RS. This model has become a robust platform for identifying chemicals and genes that modify ATR activity. At the same time, we generated a mouse model of Seckel syndrome, which was based on a mutation that severely decreases ATR levels. ATR Seckel mice are severely hypomorphic for ATR but alive and amenable to genetic crosses. However, Seckel mice accumulate significant amounts of RS and succumb to a progeroid syndrome. Interestingly, most of the RS found in these animals was restricted to the embryonic period and was marginal after birth. Hence, we had a case of intrauterine stress apparently accelerating aging later in life. This research led me to propose the concept of "intrauterine programming of aging"—namely, that intrauterine stress can influence aging later in life (Figure 1). Surprisingly, the aging observed in ATR Seckel mice was further aggravated by the absence of p53; this instance was the first time p53 loss was shown to promote aging.

In an attempt to understand how p53 loss could aggravate aging, we realized that p53 deficiency increased the amounts of RS observed in ATR mutant mice. On the basis of this observation, we speculated that, in the context of RS, faster or more promiscuous entry into S phase (as in the case of p53 deficiency) could lead to aggravated toxicity. If our hypothesis was correct, it implied that an impaired RSR could also be particularly deleterious for other conditions that generate RS. Hence, we next explored whether tumors harboring high levels of RS were particularly sensitive to limited activity of the RSR. We have recently reported that Chk1 inhibitors or ATR hypomorphism are extremely toxic for Myc-induced tumors, which present very high levels of RS. In contrast, these drugs have no effect on tumors that lack detectable levels of RS. Our work in this area has provided a new rationale for the use of ATR or Chk1 inhibitors in clinical trials, which we hope can be applied to define a more rational use of these chemicals in cancer chemotherapy.

By adapting our inducible ATR cell system to a high-throughput microscopy assay, we have also generated potent ATR inhibitors that inhibit the RSR and do not affect the ATM-dependent DDR (Figure 2). I believe these compounds have the potential to become important anticancer agents, if properly used, and I believe we have significantly contributed to this line of thought. All the synthesis information for our ATR inhibitors has been freely distributed, and we have also sent these reagents to many investigators around the world.

Grants from the Spanish Ministry of Science and Innovation, the Association for International Cancer Research (AICR), and the European Research Council also support this research.