HHMI and the University of KwaZulu-Natal announce appointment of Bishai as the first permanent director of the KwaZulu-Natal Research Institute for Tuberculosis and HIV (K-RITH). 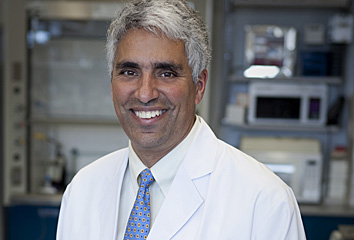 DURBAN, SOUTH AFRICA (May 26, 2010)—The University of KwaZulu-Natal (UKZN) and the Howard Hughes Medical Institute today announced the appointment of William R. Bishai, M.D., Ph.D., as the first permanent director of the KwaZulu-Natal Research Institute for Tuberculosis and HIV (K-RITH).

The appointment of Bishai, a Professor of Medicine at the Johns Hopkins University School of Medicine in Baltimore, Maryland and Co-director of the Center for Tuberculosis Research at Johns Hopkins, takes effect in September 2010. The cross-Atlantic partners conducted a year-long international search for a scientific leader to direct the pioneering joint program.

As a physician and a scientist, Bill Bishai understands the scale of human suffering caused by tuberculosis and the daunting challenges faced by researchers seeking to identify new strategies for responding to this epidemic.

“Professor Bill Bishai is a renowned infectious diseases specialist and scientist in the pathogenesis of tuberculosis. I am not only excited by his appointment, but am equally confident that his vast experience in medical science will guide the research studies at K-RITH to new heights,” says Professor Malegapuru William Makgoba, the Vice Chancellor and Principal of UKZN. “K-RITH is one of the world’s most singular and significant investments in health research to address an emerging global epidemic affecting many South Africans and other nations globally. The work of the institute will provide solutions and hope to the many people of Africa.”

Makgoba made the announcement at the start of an international symposium on the development of new diagnostic technologies for tuberculosis (TB) organized under the leadership of K-RITH’s interim director, A. Willem Sturm, Dean of the Mandela School of Medicine.

“As a physician and a scientist, Bill Bishai understands the scale of human suffering caused by tuberculosis and the daunting challenges faced by researchers seeking to identify new strategies for responding to this epidemic. He is just the kind of leader we hoped to recruit,” says Robert Tjian, HHMI president.

Both Makgoba and Tjian praised the work of the international search committee. Chaired by Barry Bloom, a tuberculosis researcher and former dean of the Harvard School of Public Health, it included scientists from the United States and South Africa.

“K-RITH is a truly novel initiative in global health,” says Bishai. “What’s new and different is that the leadership of HHMI and UKZN believe that basic science—the research that underpins the development of new diagnostics, drugs, and vaccines—needs to occur in areas of high tuberculosis and HIV prevalence. This provides a way forward to raise a future generation of researchers, motivated by the diseases surrounding them, to tackle these very difficult epidemics in Africa and other parts of the world that have so far resisted our traditional approaches.“

K-RITH builds on a strong foundation of other cross-Atlantic collaborations that have linked scientists in KwaZulu-Natal and their colleagues around the world with clinical researchers in the province. These initiatives—supported by the South African government; universities in South Africa, the U.S., and Europe; the U.S. National Institutes of Health and Centers for Disease Control and Prevention; and philanthropic funding—have made significant scientific and clinical discoveries that have advanced the treatment of HIV and, more recently, the treatment of tuberculosis.

Two leading HHMI investigators with longstanding expertise in TB and HIV research are active participants in the program: William R. Jacobs, Jr., at the Albert Einstein College of Medicine and Bruce D. Walker of the Massachusetts General Hospital, who directs the HIV Pathogenesis Program in Durban, a joint initiative of Harvard University and UKZN. Walker also directs the Ragon Institute, which is focusing on development of a vaccine against HIV. UKZN scientists helping to direct and plan K-RITH are A. Willem Sturm, a noted TB researcher, has served as K-RITH’s interim director and Salim S. Abdool Karim, UKZN Pro Vice-Chancellor (Research) and Director of the Center for the AIDS Program of Research in South Africa (CAPRISA).

Mycobacterium tuberculosis is transmitted through the air and infects about one-third of the world’s population. It often remains latent, and causes no harm to 90 percent of those infected. But more than nine million people each year develop active TB, which typically causes weight loss, night sweats, and lung damage. Nearly two million people die each year from what should be a curable disease, either because they are not properly diagnosed, do not take the right medications, or have drug-resistant strains that defy treatment.

South Africa has more residents infected with HIV than any other nation in the world—an estimated 5.7 million by 2008. And it has one of the highest per capita rates of tuberculosis in the world. Tuberculosis, a major problem in the pre-AIDs South Africa, emerged as a public health crisis in its own right, particularly with the emergence of both multi-drug resistant (MDR) and extensively drug resistant (XDR) strains of tuberculosis in persons already infected with HIV.

KwaZulu-Natal province, home to more than 10 million people, bears an even greater burden of disease than the nation as a whole, and as much as 40 percent of the population may be positive for HIV. When an outbreak of XDR-TB was reported in the rural area of Tugela Ferry in 2006, the region became a focus of international concern even as additional cases of XDR-TB surfaced elsewhere in the world.

As Co-director of the Center for Tuberculosis Research at Johns Hopkins, Bishai’s research is focused on understanding how and why the tuberculosis bacillus has been so successful at infecting humans. “Mycobacterium tuberculosis is actually a very highly adapted human pathogen that takes advantage of unique genes to subvert signaling and other critical pathways in human cells,” says Bishai.

Bishai’s laboratory has been using genetic techniques to investigate how M. tuberculosis can slip under the radar of the human immune system. Over time, he and his colleagues have learned that the microbe has developed a range of clever strategies to foil macrophages—immune system cells that attack and engulf invaders. “The microbe is almost like a computer virus,” he says. “It sends false signals into the signal transduction pathways of the macrophages that trick them into doing the wrong thing.”

Bishai says that understanding the fundamental interactions that occur between the microbe and human cells is a critical step in developing new drugs or vaccines to treat tuberculosis. “If one wants to target the infection with drugs, knowing the mechanisms of pathogenesis is an important roadmap for making those drugs,” says Bishai. He plans to use the same strategy at K-RITH to develop new quicker, cheaper tools for diagnosing TB infection.

And while new drugs are desperately needed for TB, Bishai says much benefit can also come from using animal models of TB to study the effectiveness of certain FDA-approved drugs that have not been used specifically for TB treatment. “Using that approach, we have worked with others at Hopkins to characterize a number of important new drugs, including moxifloxacin and rifapentine, that may be broadly useful for treating several forms of TB,” he says.

Bishai, 50, received both his medical degree and doctorate from Harvard University 1989. He completed his fellowship training in the Division of Infectious Diseases at the Johns Hopkins School of Medicine and was a Howard Hughes Postdoctoral Research Fellow in the laboratory of Nobel laureate, Dr. Hamilton Smith. He is the author of more than 150 papers in peer-reviewed journals, and receives grant support from the National Institutes of Health. He serves on several editorial boards, review panels, and is the Co-Chair of the WHO Stop TB Partnership‘s Working Group for New TB Drugs.

The new K-RITH facility will be integrated with the existing Doris Duke Medical Research Institutes, which houses the research programs directed by Walker and Karim. The total cost of constructing the building is estimated at R400 million or about $50 million, with HHMI committed to providing substantial support toward its completion. The facility will include the bio-safety laboratories necessary for tuberculosis research with construction expected to begin in September. HHMI has also funded construction of interim laboratory facilities that will be used by K-RITH researchers, including Bishai.

Bishai says that K-RITH’s resident research staff will grow to more than 110 people including eight senior scientists, 40 pre- and post-doctoral students, and a support staff of 40. The Durban-based team will be complemented by visiting scientists and students from national and international collaborating institutions. The director designate and his family expect to relocate to Durban in 2011.

HHMI has committed to providing substantial financial and technical support to K-RITH over the next decade. The Institute awarded seed grants totaling more than $1.1 million to scientists in the U.S. and South Africa in 2008 as part of a K-RITH development plan and continues to support those initial programs.

Howard Hughes Medical Institute
www.hhmi.org
The Howard Hughes Medical Institute (HHMI) is one of the world’s largest philanthropies, with laboratories across the United States and grants programs throughout the world. The Institute, which is located just outside Washington, D.C., is a nonprofit medical research organization that employs hundreds of leading biomedical scientists working at the forefront of their fields. In addition, through its grants program and other activities, HHMI is helping to enhance science education at all levels and maintain the vigor of biomedical science worldwide.

University of KwaZulu-Natal
www.ukzn.ac.za
The University of KwaZulu-Natal (UKZN), located in Durban, South Africa, aims to be a truly South African institution that is academically excellent, innovative in research, critically engaged with society, and demographically representative. The university was formed in 2004, as a result of the merger between the University of Natal and the University of Durban-Westville. UKZN includes five campuses, all located in KwaZulu-Natal province, including a medical campus in Durban. It is the second most productive research university in South Africa and one of only three African universities rated among the top 500 universities in the world. UKZN is home to the largest HIV and AIDS research programs in Africa: the Centre for the AIDS Programme of Research in South Africa (CAPRISA), funded by the United States National Institutes of Health, and the Africa Centre for Health and Population Studies, funded by the Wellcome Trust.