Viral Strains that Cause “Stomach Flu” Don’t All Look Alike

A new structural analysis of four norovirus strains reveals that the virus’s shell varies in size and molecular arrangement – a surprise finding that could help scientists developing vaccines.

Norovirus, best known for sweeping through daycares and cruise ships, can form small, medium, and large structures depending on the viral strain.

The discovery, reported June 10, 2019, in the journal Proceedings of the National Academy of Sciences, overturns nearly two decades of conventional wisdom about norovirus. Until now, the only structural data about the virus that scientists had came from a single, not particularly prevalent, strain.

“Everyone thought that all the strains would look about the same – like the one that was solved 20 years ago,” says Howard Hughes Medical Institute Investigator Leemor Joshua-Tor. “It turns out that they don’t!”

Joshua-Tor’s team used a microscopy technique called cryo-electron microscopy (cryo-EM) to visualize the shells of four viral strains, including one responsible for up to roughly 80 percent of norovirus outbreaks. That strain was 71 percent larger (by volume) than the one previously reported. Its shell was also decorated with a different pattern of molecular spikes.

Those structural details will be crucial for scientists working on vaccines or antiviral therapies to treat norovirus infection, says Joshua-Tor, a structural biologist at Cold Spring Harbor Laboratory (CSHL). Though norovirus causes about 21 million cases of foodborne illness in the United States every year, there are currently no approved therapies.

At least one vaccine candidate is working its way through clinical trials now. But CSHL study coauthor James Jung says scientists will need to take the virus’s newfound variation into account – so any new vaccine protects against a broad array of strains.

HHMI talked with Jung and Joshua-Tor to find out more about the “stomach flu,” the virus that causes it, and how they finally solved the structure of outbreak strains’ shells.

Joshua-Tor: It’s a virus that causes gastroenteritis. It makes you throw up, causes diarrhea, and is extremely infectious.

Jung: It’s been reported that it takes as little 10 to 18 virus particles to start an infection.

How many particles are in vomit?

Jung: I’m not sure, but it’s been estimated for a less-prevalent norovirus strain that a typical diarrheal sample contains approximately five billion viral particles per gram.

How does norovirus spread?

Joshua-Tor: It’s aerosolized when people vomit. Surfaces and food and water supplies can get contaminated. That’s why it can spread so quickly among people in close proximity, like in daycare centers, nursing homes, and cruise ships.

Jung: It belongs to a family called Calciviridae. The name comes from the Latin word “calyx,” which means cup-like cavity. The surface of the virus has these spikes with depressions that look a bit like cups. So it’s basically a sphere with spikes sticking out. And those spikes bind to human cells.

How many strains of norovirus exist?

Jung: 30 or more. A strain called GII.4 is responsible for the majority of all norovirus outbreaks. But GII.4’s structure was completely unknown.

Why has no one focused on outbreak strains’ structure until now? 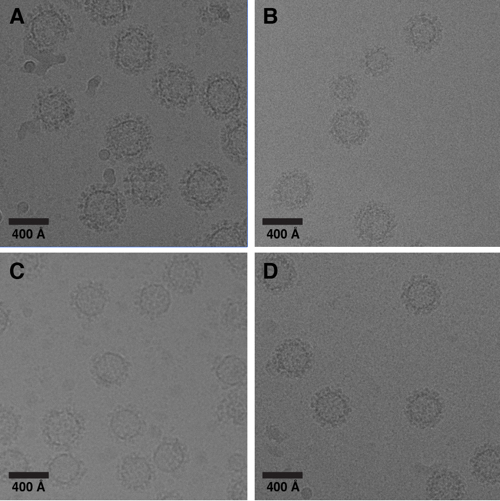 Jung: Before the resolution revolution of cryo-EM, the only way to solve high-res structures was through x-ray crystallography. I tried crystallizing norovirus before we got our own cryo-EM microscope, but only one strain worked – it was the one that was previously solved. I think that’s why no one could solve the other structures.

How does cryo-EM work?

Joshua-Tor: You place your sample on a small copper grid and put it in this contraption that leaves a thin layer of the sample on the grid. Then, you very quickly plunge it into liquid ethane, which freezes the sample and causes the water inside to become glass (we call it vitreous ice). That means it doesn’t form crystals, which could interfere with the image. It also helps protect biological samples from radiation damage from the microscope’s electrons.

Next, you put the frozen grid into the microscope, which hits the sample with an electron beam. Then, you get images of your virus particles.

Cryo-EM has been around for a while. What’s new?

Joshua-Tor: In the last few years, cryo-EM has become very powerful – in terms of the speed of the cameras and the magnets that precisely control the electrons’ path.

When you hit a sample with electrons, it moves a little bit, so you can get a blurring effect. But [study coauthor] Nikolaus Grigorieff [of HHMI’s Janelia Research Campus] developed a technique that lets you collect movies instead of images and then computationally align the moving particles. All these things let us get much higher-resolution data than what we were getting before.

How did the norovirus outbreak strain differ from the known strain?

Jung: It turns out that the shell dimensions are different – a lot larger. It’s also made of a larger number of components.

Joshua-Tor: James calls it the shape-shifting virus. The organization of the spikes that talk to the cells in the body are positioned differently. You know how babies have toy balls with knobs on them to grip? That’s what the virus looks like, but the knobs all look a little different – so that’s important.

Joshua-Tor: We think how the knobs interact with human cells can affect virulence. And James discovered that there’s a zinc ion that helps the knobs organize in a particular way to promote binding to human cells.

Is it common for viral strains to differ in appearance?

Joshua-Tor: It’s not common, but it’s not unheard of. It wasn’t expected for norovirus.

How can knowing about these shells help us?

Jung: Current vaccine candidates have been made with the assumption that there’s only minor variation between strains. Actually, the dimensions are completely different. Our findings could help people formulate a better vaccine.

This interview has been edited for length and clarity.