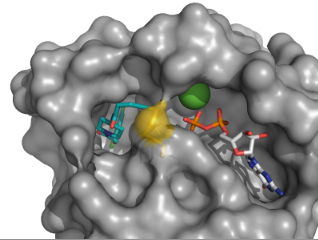 In the field of drug design, the protein K-Ras is legendary. It’s been on everyone’s “target” list for more than 30 years due to its status as the most commonly mutated oncogene in human cancers. Despite this high profile, K-Ras has earned a reputation in scientific circles as being “undruggable” because many pharmaceutical, biotech, and academic laboratories have failed to design a drug that successfully targets the mutant gene.

Now, Howard Hughes Medical Institute (HHMI) researchers at the University of California, San Francisco have identified and exploited a newfound “Achilles heel” in K-Ras. The weak point is a newly discovered “pocket,” or binding site, identified by HHMI investigator Kevan M. Shokat and colleagues. Shokat and his team have designed a chemical compound that fits inside this pocket and inhibits the normal activity of mutant K-Ras, but leaves the normal protein untouched.

“K-Ras is considered to be the most important oncogene in cancer and is widely believed to be ‘undruggable,’” said Shokat. “We report the discovery of a new pocket on K-Ras that is druggable. We believe this has real translational implications for patients.”

In a research article published November 20, 2013, in the journal Nature, Shokat’s team describes a novel chemical compound that fits into a previously unknown pocket in K-Ras and interferes with function of the enzyme.

“The potential clinical impact of a K-Ras inhibitor cannot be overstated—this is one of cancer’s holy grails," said Charles Sawyers, an HHMI investigator at Memorial Sloan Kettering Cancer Center, who was not part of the research team. "The Shokat team’s success, achieved by focusing on a single K-Ras mutant, could catalyze a new drug discovery strategy for the entire Ras inhibitor field. Their results suggest that Ras is not a single target but multiple targets. It is still early days, but one can begin to envision a collection of different Ras inhibitors, each customized to inhibit different Ras mutants.”

The Ras proteins are small GTPase enzymes that transmit signals within cells. They are critical to cells because of the central role they play in cell growth and survival. The name Ras also refers to the family of genes encoding those proteins. One of those genes, K-Ras, which was discovered nearly 30 years ago, is mutated in 30 percent of human tumors, including 90 percent of pancreatic cancers, 40 percent of colon cancers, and 20 percent of non-small cell lung cancers. Cancers with Ras mutations are aggressive and respond poorly to standard therapies.

Despite setbacks in targeting mutant Ras genes, the National Cancer Institute (NCI) recently emphasized the continued importance of this elusive drug target by announcing a focused $10 million effort, dubbed the RAS project, to bring together researchers to develop new ideas for blocking Ras. The project aims to spur development of new drugs or therapies to benefit patients with cancer.

Shokat’s HHMI team, which is not part of the NCI initiative, started working on Ras in earnest about six years ago. Using their expertise in chemistry, Shokat and two team members—Ulf Peters, a postdoctoral fellow, and Jonathan Ostrem, an MD-PhD student—sketched out some early ideas for a new class of drugs that inhibit Ras mutants. “Some of the early strategies did not work,” he said. “We had to develop a new kind of screen and that ultimately led to progress in developing this new inhibitor.”

Shokat says they did a few things differently when defining the scope of their attack. They kept their focus narrow, being mindful of strategies that had not worked for other scientists. They also chose to study a type of K-Ras mutant called G12C (for Glycine-12 to Cysteine), a K-Ras mutant prevalent in about seven percent of patients with lung cancer. (The K-Ras gene is mutated in 20 percent of lung cancer cases, and G12C is the most frequent mutation of K-Ras.)

This mutation causes a substitution of the amino acid cysteine for glycine at position 12 in the K-Ras protein. Importantly, this cysteine sits in a location critical for the normal function of Ras. In another departure from previous efforts, Shokat and his colleagues did not try to target versions of Ras that had mutations in the amino acids aspartate and valine—which are relatively common and hence where a lot of scientists had focused their attention previously. Instead, they picked G12C mutants because those Ras mutants affected a large population of lung and colorectal cancer patients (over 20,000 new patients each year in the US alone) and because they had a cysteine substitution.

Shokat says the presence of this cysteine conveyed certain chemical properties that gave his team a unique handle for drug design. Cysteine is unique among the 20 natural amino acids in its ability to form covalent bonds. Most commonly bonds are made between two cysteines to stabilize protein structure, but if a free cysteine is present, as in G12C K-Ras, a specifically designed drug can form a bond to the cysteine.

“Everybody else (developing drug design strategies) had been thinking they had to go after all the Ras mutants,” Shokat says. “We looked for what no else had done and we picked this particular mutation because of its chemical properties.”

Over a three-year period, the team developed a preliminary screen with more than 500 chemical compounds to see if they could identify one that would bind covalently and “tether” with K-Ras G12C. Their studies led to the identification of a potent inhibitor of K-Ras. To get a better picture of how this compound interacted with K-Ras, the scientists solved crystal structures of the compound bound to K-Ras. When they examined the data, Shokat and his team found a previously undescribed pocket on the surface of K-Ras near the cysteine residue. “This pocket is new,” Shokat says. “No one had found it before.”

Investigating further, they found that the compound interferes with Ras in such a way that it alters its natural affinity for its substrate GTP, but not GDP. “One of the most important aspects of this is that this small molecule inhibits only mutant K-Ras and not the normal protein,” Shokat says.

Next steps include continuing to optimize this compound so that it can be further tested to see how well the compound kills cancer cells with the G12C mutation. Shokat said he and his colleagues have started a company called Araxes Pharma, LLC., which has entered into a partnership with Janssen Biotech, a division of Johnson & Johnson, to develop these compounds for potential clinical use.