Trypanosome Parasites with a Different Lifestyle Hide Out in Fat Tissue

Researchers have discovered that fat tissue is a previously unrecognized reservoir of trypanosomes, the parasites that cause sleeping sickness. 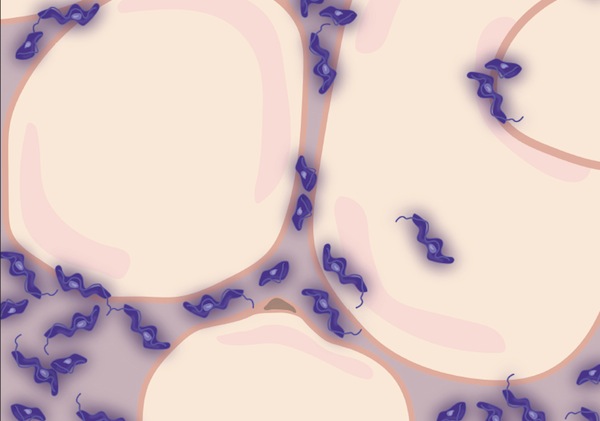 Fat tissue is a previously unrecognized reservoir of trypanosome parasites in mice with sleeping sickness, according to a new study by HHMI International Scholar Luísa Figueiredo at the Instituto de Medicina Molecular in Lisbon, Portugal. Trypanosomes are transmitted to humans by the bite of a tsetse fly and were previously believed to live mainly in the blood and brain of the host.

The new study, which is published in the May 26, 2016, issue of Cell Host & Microbe, shows that the parasites living in fat tissue express different genes than those that live in the blood, which had been extensively characterized previously. Those genes include enzymes in a biochemical pathway that allows the parasites to burn fat for their energy use. This could explain the long-standing observation that sleeping sickness is typically accompanied by dramatic weight loss—the causes of which had been an intriguing question in the field of trypanosome biology. The previously unknown reservoir of parasites could also account for the inexplicable relapses in patients whose blood showed no trace of parasites.

The findings originated from a serendipitous observation during the course of a separate research project investigating how trypanosomes affect sleep cycles. Because the brain controls sleeping, the researchers initially wanted to understand how and when the parasites enter the brain during the course of infection. They infected mice and sacrificed them at successive stages to see when the trypanosomes entered the brain. The pathologist examining the mouse tissue found that, in all the samples, the fat tissue appeared to contain many more parasites than the brain, heart, lung, blood, and other tissues.

The researchers quantified the number of parasites in fat tissue and confirmed that this could have important implications in terms of pathology and drug treatment. “At this point, if we had not had HHMI funds, we would have had to stop, because the project was going to expand tremendously and we could not just use money from another grant,” explained Figueiredo. “So this is where being funded by HHMI made a huge difference.”

Although the grant that Figueiredo had originally submitted to HHMI was focused on the genetic mechanisms that the parasites use to evade the host immune response, the HHMI funding allowed her freedom to change course in her research. So Figueiredo decided to use the grant to investigate the biology of the parasites living in fat tissue.

“It’s a big deal in the trypanosome community to show this, because some researchers had already looked for activity of this pathway in other stages of the life cycle, and they had never seen this pathway active,” explained Figueiredo. “There was a debate about whether it was active in a condition that we had never characterized. So we show for the first time that this pathway is active, and it is active in an environment where there are lots of lipids. … so this resolves a debate in the field.”

If the researchers’ observations in mice hold true in humans, the implications for drug development are several. First, the drugs must be designed to penetrate fat tissue, not just the bloodstream. “We never thought that the drugs had to enter the adipose tissue,” said Figueiredo. And second, the drugs must target the specific form of parasites living in the fat tissue. “Perhaps the drug target that is highly expressed in parasites in the blood is not expressed when the parasites are in the adipose tissue, and so it’s possible that the drug that is very efficient at killing the parasites in the blood will not be effective for the form living in the fat,” she explained. Developing a drug to target both forms—or separate drugs to target each form—will be important going forward, she says.

Figueiredo is grateful for the flexible funding she received from HHMI. "It’s not just the fact that it’s flexible money,” she adds. “It’s the actual ‘HHMI attitude’ that we learn from going to the HHMI scientific meetings. We are told that what HHMI expects from you is great science. That is what should drive you. … We have the freedom to use the money but also the encouragement to do that,” she said. “It’s a true vote of confidence on the researcher.”