A new study shows that most early ovarian tumors exist for years at a size that is a thousand times smaller than existing tests can detect reliably. 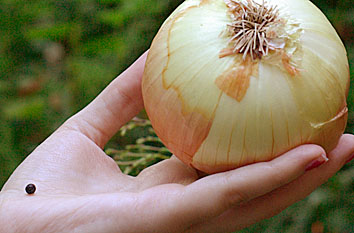 A new study by Howard Hughes Medical Institute researchers shows that most early stage ovarian tumors exist for years at a size that is a thousand times smaller than existing tests can detect reliably.

But the researchers say their findings also point to new opportunities for detecting ovarian cancer—a roughly four-year window during which most tumors are big enough to be seen with a microscope, but have not yet spread.

“Our work provides a picture of the early events in the life of an ovarian tumor, before the patient knows it's there,” says Howard Hughes Medical Institute researcher Patrick O. Brown. “It shows that there is a long window of opportunity for potentially life-saving early detection of this disease, but that the tumor spreads while it is still much too small to be detected by any of the tests that have been developed or proposed to date.”

Like almost everything with cancer… the more closely you look at the problem, the harder it looks. That’s not to say that I don’t believe it’s a solvable problem. It’s just a difficult one.

According to the American Cancer Society, some 15,000 women in the United States and 140,000 women worldwide die from ovarian cancer each year. The vast majority of these deaths are from cancers of the serous type, which are usually discovered only after the cancer has spread.

“Instead of typically detecting these cancers at a very advanced stage, detecting them at an early stage would be enormous in terms of saving lives,” says Brown, who is at Stanford University School of Medicine. Early detection would enable surgeons to remove a tumor before it spreads, he adds.

The article—co-authored by Chana Palmer of the Canary Foundation, a nonprofit organization focused on early cancer detection—was published July 28, 2009, in the open access journal PLoS Medicine. (The complete article is available online.)

“Like almost everything with cancer … the more closely you look at the problem, the harder it looks,” Brown says. “That’s not to say that I don’t believe it’s a solvable problem. It’s just a difficult one.”

In the quest to develop early detection methods for ovarian cancer, Brown says, science hasn’t had a firm grasp on its target. So he and Palmer took advantage of published data on ovarian tumors to generate a better understanding of how the cancer progresses in its earliest stages.

The team analyzed data on serous-type ovarian tumors that were discovered when apparently healthy women at high genetic risk for ovarian cancer had their ovaries and fallopian tubes removed prophylactically. Most of the tumors were microscopic in size; they were not detected when the excised tissue was examined with the naked eye.

The analysis uncovered a wealth of unexplored information. Thirty-seven of the early tumors had been precisely measured when they were excised—providing new details about the size of the tumors when they were developing prior to intervention, Brown says. By extrapolating from this “occult” size distribution to the size distribution of larger, clinically evident tumors, the researchers were able to develop a model of how the tumors grew and progressed. “We are essentially trying to build a story for how these tumors progress that fits the data,” Brown explains.

Among the study’s findings:

Brown’s lab is now looking for ways to take advantage of that window of opportunity to detect the microscopic tumors and intervene before the cancer spreads.

One strategy the laboratory is pursuing is to examine tissues near the ovaries, in the female reproductive tract, for protein or other molecular markers that could signify the presence of cancer. Brown says answering another question might also prove helpful: whether there is any reliable flow of material from the ovaries and fallopian tubes through the uterus and cervix into the vagina—material that might be tested for a specific cancer marker.

Despite science’s broad understanding of cancer at a molecular level, it has been challenging to identify simple molecular markers that signal the presence of early disease. One current blood marker, CA-125, has proven useful in monitoring later-stage ovarian cancer, but it has not been helpful for early detection. So Brown’s lab is also looking for biomarkers that are present only in ovarian tumors and not in healthy cells, instead of relying on tests that look for unusually high levels of a molecule that is part of normal biology (like CA-125).

The researchers are doing extensive sequencing of all messenger RNA molecules (which carry information for the production of specific proteins) in ovarian cancer cells, searching for evidence of proteins in these cells that would never be found in non-cancer cells. These variant molecules could be produced as a result of chromosome rearrangements—when the genome is cut and spliced in unusual ways—in ovarian cancers. “It’s a long shot,” says Brown, “but it’s important enough to try.”