The University of Maryland, Baltimore County, the Pennsylvania State University, the University of North Carolina at Chapel Hill, and HHMI are working together to learn how to adapt the Meyerhoff Scholars Program at more universities. 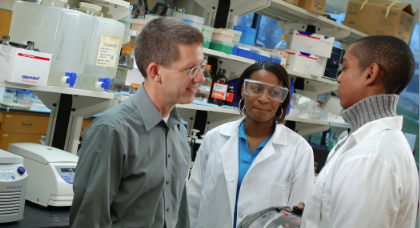 Can the nationally acclaimed Meyerhoff Scholars Program, which has an unparalleled record of advancing diversity in the sciences, be adapted successfully at more universities?

That question is at the heart of a new partnership between the University of Maryland, Baltimore County (UMBC), the Pennsylvania State University, the University of North Carolina at Chapel Hill (UNC), and the Howard Hughes Medical Institute (HHMI). The four institutions are launching the collaborative Meyerhoff Adaptation Project to learn whether elements of UMBC’s highly regarded Meyerhoff Scholars Program can be adapted at Penn State and UNC. The participating schools aim to learn what it takes to establish a successful program and to share what they learn so other institutions might follow.

During the last 25 years, UMBC’s Meyerhoff Program has been highly successful in preparing minority students for STEM careers. “The primary purpose of the Meyerhoff Program is to produce scientists and engineers, with an emphasis on people from underrepresented groups—but also people of all races—who are interested in helping others,” said Freeman A. Hrabowski, III, President of UMBC, who created the program with philanthropist Robert Meyerhoff in 1988.

This new initiative responds to the very real and urgent challenges facing the scientific community. Diversity benefits science. The more complex and difficult the scientific problems become, the more critical it is to have a diverse set of problem solvers. In order to sustain the nation’s scientific excellence, it is essential to recruit from the entire talent pool.

Today, about 30 percent of the U.S. population is African American, Hispanic, or Native American, yet only nine percent of those in the scientific workforce are underrepresented minorities. And, unless it is addressed effectively, this disparity will grow rapidly. The U.S. population will become “majority minority” in 2042, and people who are 18 years old or younger—the country’s future talent pool—will become “majority minority” in 2018.

“We are fortunate to be partnered with UMBC, Penn State and HHMI in this exciting effort to adapt the Meyerhoff Program to our campus,” said Joseph Templeton, Vice Chair of Education and Francis Preston Venable Professor of Chemistry at UNC. “Using the Meyerhoff Program as a model, we want to improve the STEM experience among all populations at Carolina so our students have an abundance of 21st century tools to lead future scientific endeavors.”

“We are extremely grateful to have the generous support and partnership with HHMI as we embark on this adaptation experiment,” said Mary Elizabeth Williams, Associate Dean for Undergraduate Education and Professor of Chemistry at Penn State. “It is only with the strong institutional commitments of our partners that we are able to start and sustain the Penn State Millennium Scholars Program, which will provide tremendous opportunities for the scholars and lead the way for broader institutional transformation within our community of science and engineering students, faculty and staff.”

At UMBC, the Meyerhoff Program is built around a complex set of “interventions”—from recruitment and summer bridge programs to intensive mentoring, collaborative learning and multiple research experiences. One of the long-term goals of this new collaboration is to understand how each component of the Meyerhoff model contributes to its overall success. To that end, the schools have worked together extensively on planning how to implement, study and assess introduction of the Meyerhoff Program on their campuses.

Social scientists at all three universities will gather data about how the students study and collaborate, how the university communities around them contribute, and whether the students face similar challenges and pressures at each school. Throughout the project, each school will carefully document, assess and communicate the results of their activities so they can determine what is working and why it is working. As the project progresses, the participants plan to publish and disseminate the findings so that other universities can learn how the adaptations were approached and consider creating their own version of the Meyerhoff model.

HHMI is particularly interested in a thorough assessment of the project and has assembled an advisory committee of experts in the areas of assessment, student and faculty development, and promoting diversity among scientists.

If the initiative is successful, the four institutions believe they can create a roadmap for other universities seeking to develop and increase the numbers of high-achieving, diverse undergraduates in STEM fields. HHMI is funding the initial five-year Meyerhoff Adaptation Project with $7.75 million.

The Meyerhoff Program at UMBC is regarded as a national powerhouse when it comes to fostering diversity in the sciences. Each year, the program admits 50-70 students. The program’s success is built on core foundational values, such as community-building, mentoring by peers and faculty, setting high expectations, intense preparation and focus on big-picture goals. Since 1993, the program has graduated more than 900 students. Meyerhoff Scholars have earned nearly 600 PhDs, MDs, Masters, and other professional degrees.

“There is a strong need for programs like this that can find ways to increase the number of students from all races who do not simply make it through the program—but who excel,” said Hrabowski.

In 1988, Hrabowski, who was then UMBC’s vice provost, started the Meyerhoff Scholars Program with a gift of $500,000 from the Jane and Robert Meyerhoff Foundation. The program has grown with additional support from the Meyerhoff Foundation, other foundations, companies and federal agencies. From its inception, the program’s singular focus has been to increase diversity among future leaders in STEM fields. Initially, the program focused on African-American students, but since the mid-1990s it has been open to all high-achieving students. For the last two decades, the program’s impact has been undeniable:

Despite the Meyerhoff program’s success and national stature, no other university has replicated it. “We believe now is the time to try this experiment,” said HHMI President Robert Tjian. “We don’t have the luxury of sitting back and waiting 50 years. We are encouraged that these schools have decided to work together on this challenge.

“It’s critical to address this now because the talent pool from which we will be drawing our future scientists is changing rapidly. We are leaving a lot of talent on the table by not including more people of diverse backgrounds in the sciences.”