By studying the effects of flu viruses on individual cells, scientists have shown how viral mutation can affect the outcome of infection. 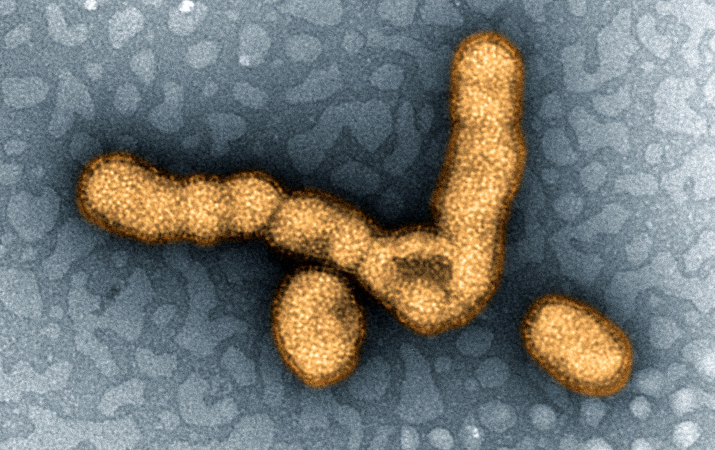 One of influenza virus’s main weapons is actually a double-edged sword.

The virus’s ability to rapidly mutate lets it escape from the immune system’s memory and explains why people can be repeatedly re-infected with flu – unlike measles or polio. But those mutations can also blow the virus’s cover, Howard Hughes Medical Institute Investigator Jesse Bloom and colleagues reported May 8, 2019, in the Journal of Virology.

“We usually think of the flu virus’s ability to mutate and evolve as a bad thing for us,” Bloom says. It lets the virus jump from one species to another and evade the defenses provided by the flu vaccine. But, he says, “mutating has a downside for the virus, too.”

The work catalogs the different effects mutated and unmutated viruses have on individual human cells. It’s the first time scientists have taken such a cell-by-cell look and could help explain why people’s reactions to the flu vary so much.

A flu infection begins when flu viruses enter a handful of cells. The viral proteins get to work replicating their genomes and tricking infected cells into making viral proteins. New viruses bearing a copy of the invader’s genome quickly package themselves up and find more cells to invade. Some of those new viruses are exact copies of the original and others contain mistakes.

Billions of viruses will soon infect cells throughout the body – that’s when the aches and pains begin. But not everyone becomes equally sick. One of the reasons for this variation, Bloom says, is that some individuals’ immune systems are better at quickly and robustly controlling the infection.

Before immune cells respond, though, infected cells – usually lung cells – have to detect the virus and let nearby cells know. If the immune system has seen a particular strain before, even in the form of a vaccine, it quickly remembers how to fight it. If the virus has mutated too much since the last infection, the body will need extra time. That’s how the virus’s high mutation rate hampers the body’s defenses, Bloom says.

But it doesn’t explain the variation seen in the severity of people’s infections, he says. Bloom, a virologist at the Fred Hutchinson Cancer Research Center, thought those first few infected cells might hold the answer. Until now, scientists studying flu had largely studied armies of viruses infecting scads of cells. Bloom’s team wanted to tease apart the effect of single viruses on single cells.

“We’ve known for a long time that flu virus mutations exist,” he says, “but it had never before been possible to see the mutations and their effects in individual cells.”

His team infected human lung cells in a dish with lab-generated influenza viruses with relatively uniform genetic sequences. Then, they let the viruses infect and replicate within the cells and assessed their responses. To determine whether a given cell had detected its invader, they measured production of interferon, a molecule used to activate anti-viral defenses. To see how well an invading virus had replicated, they measured levels of viral messenger RNA, the building instructions for viral proteins.

“We’ve known for a long time that flu virus mutations exist, but it had never before been possible to see the mutations and their effects in individual cells.”

The team also combined several genomic technologies to identify mutations that had cropped up as the virus multiplied within the cells. Cells’ responses to infection seemed to be related to the genomic quirks of the infecting virus, the team found. For example, an unmutated virus was more likely to produce lots of viral RNA and less likely to trigger the cellular alarm. Mutated viruses generally had the opposite effect.

“That’s where the virus’s high mutation rate becomes a double-edged sword,” Bloom says. “Some of its mutations inevitably foil its hiding mechanisms.” If someone is infected by mutated viruses, the immune system might more easily gain the upper hand than in someone infected by unmutated viruses, he says.

“So the initial variation might help determine how an infection proceeds and why the flu affects people so differently,” says Bloom. What’s next is to verify the finding in animals, he says, to see what happens when a full immune system is present.