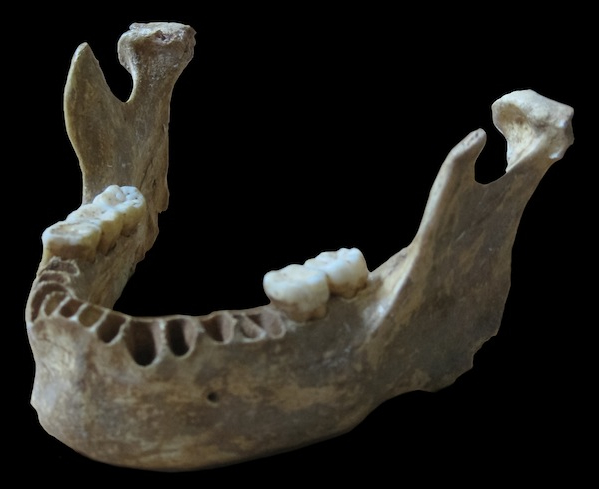 In 2002, archaeologists discovered the jawbone of a human who lived in Europe about 40,000 years ago. Geneticists have now analyzed ancient DNA from that jawbone and learned that it belonged to a modern human whose recent ancestors included Neanderthals.

Neanderthals lived in Europe until about 35,000 years ago, disappearing at the same time modern humans were spreading across the continent. The new study, co-led by Howard Hughes Medical Institute (HHMI) investigator David Reich at Harvard Medical School and Svante Pääbo at the Max Planck Institute in Germany, provides the first genetic evidence that humans interbred with Neanderthals in Europe. The scientists reported their findings in the June 22, 2015, issue of the journal Nature.

So the jawbone that archaeologists uncovered in Romania in 2002, which radiocarbon dating determined was between 37,000 and 42,000 years old, was an important find. “It's an amazing bone,” Reich says. The jawbone was found along with the skull of another individual in a cave called Peştera cu Oase. No artifacts were discovered nearby, so anthropologists had no cultural clues about who the individuals were or how they lived. The physical features of the jawbone were predominantly those of modern humans, but some Neanderthal traits were also apparent, and the anthropologists proposed that the bone might have belonged to someone descended from both groups.

Pääbo and Reich teamed up to investigate that possibility by analyzing DNA from the jawbone. Trace amounts of ancient DNA can be recovered from bones as old as the Oase jawbone, but to analyze it, that ancient DNA must be sifted out of an overwhelming amount of DNA from other organisms. When Qiaomei Fu, who was a graduate student in Pääbo's lab, obtained DNA from the bone, most of it was from microbes that lived in the soil where the bone was found. Of the fraction of a percent that was human DNA, most had been introduced by people who handled the bone after its discovery.

Using methods pioneered in Pääbo's lab, Fu enriched the proportion of human DNA in the sample, using genetic probes to retrieve pieces of DNA that spanned any of 3.7 million positions in the human genome that are considered useful in evaluating variation between human populations. Most of the DNA she ended up with was human, but came from people who had handled the jawbone since 2002, rather than the jawbone itself. Fu, who is now a postdoctoral researcher in Reich's group, solved that problem by restricting her analysis to DNA with a kind of damage that deteriorates the molecule over tens of thousands of years.

Once they had discarded the contaminating DNA, Reich's team could compare the fossil's genome to genetic data from other groups. Through a series of statistical analyses, a surprising conclusion emerged. “The sample is more closely related to Neanderthals than any other modern human we've ever looked at before,” Reich says. “We estimate that six to nine percent of its genome is from Neanderthals. This is an unprecedented amount. Europeans and East Asians today have more like two percent.”

That suggested the Oase individual's ancestry was recent. As DNA is passed on from generation to generation, segments are broken up and recombined, so that the DNA inherited from any one individual becomes interspersed with the DNA of other ancestors. Reich found segments of intact Neanderthal DNA in the fossil that were large enough to indicate that the Oase individual had a Neanderthal ancestor just four to six generations back. That suggests that modern humans interbred with Neanderthals after they had arrived in Europe.

“It's an incredibly unexpected thing,” Reich says. “In the last few years, we've documented interbreeding between Neanderthals and modern humans, but we never thought we'd be so lucky to find someone so close to that event.”

The Oase individual is not responsible for passing his Neanderthal ancestry on to present day humans, however. Reich found no evidence that he is closely related to later Europeans. “This sample, despite being in Romania, doesn't yet look like Europeans today,” he says. “It is evidence of an initial modern human occupation of Europe that didn't give rise to the later population. There may have been a pioneering group of modern humans that got to Europe, but was later replaced by other groups.”