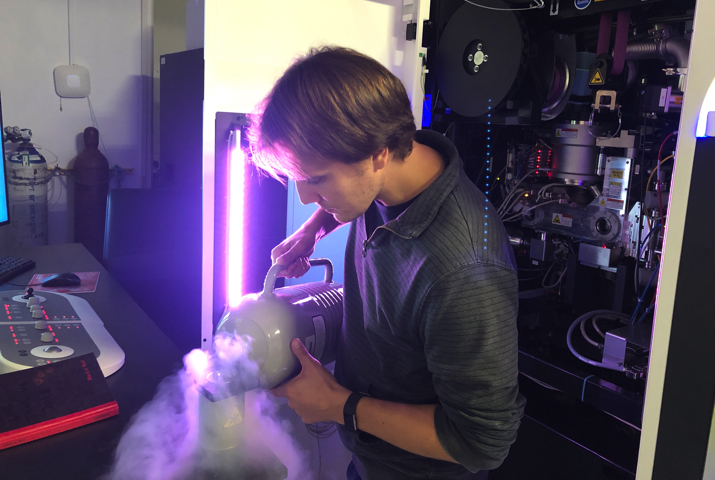 Work that previously could have taken chemists months can now be done in minutes.

The technique uses a standard cryo-electron microscope and could become scientists’ go-to procedure for identifying everything from the products of routine chemical reactions to unknown powders at crime scenes, he says. “Now chemists can actually take powders directly from a reaction, apply them to a sample grid, and get high-resolution molecular structures the same day.”

The art of x-ray crystallography

Molecules are made up of atoms bonded together in various arrangements. These arrangements, or structures, give a molecule its identity. They determine its shape, size, rigidity, and how it interacts with other molecules. With a molecule’s structure in hand, a chemist can learn whether a reaction happened as predicted, hypothesize how a protein works, or brainstorm how to tweak a molecule to make it into a better drug.

But structural data isn’t easy to obtain. The gold standard for determining a molecule’s structure, x-ray crystallography, requires samples to form large, repeating geometric lattices, or crystals. But most biological molecules don’t naturally do this. It can take months or years to coax proteins into crystals, says Gonen, a biochemist at the University of California, Los Angeles (UCLA). “The process is considered an ‘art,’ and requires a certain amount of luck.”

Crystals are then blasted with x-rays, which is “akin to standing next to a megaton nuclear explosion,” he says. The x-rays hit the crystals and then scatter in predictable ways, giving scientists information about the molecule’s structure. To survive this treatment, crystals have to be relatively large.

Gonen’s favorite molecules, membrane proteins, are notoriously difficult to work with. In 2013, he and his team, then at HHMI’s Janelia Research Campus, developed a way to glean structural data from crystals using electron beams, instead of x-rays. The main benefit of MicroED is that it works on crystals much smaller – a billion times smaller – than crystals used in x-ray crystallography. That’s because electrons interact better with matter than x-rays, Gonen explains. Although membrane proteins are still challenging for MicroED, it has since been applied to many other proteins.

From powder to structure

Gonen’s idea for the current project came over lunch with UCLA chemist Hosea Nelson. Gonen told him that, in the initial development of MicroED, his lab had determined the structure of a small organic molecule. Nelson, whose work as a chemist revolves around small molecules, “couldn’t believe me when I told him it was pretty straightforward,” Gonen says. So the two teamed up and decided to see how generally applicable MicroED was to chemistry and to alert the chemistry community of this technology.

Michael Martynowycz loads a sample into a cryo electron microscope for MicroED.

Beginning with a jar of progesterone powder, they crushed a tiny amount and deposited it on a sample grid. Then, they cooled it to -196 degrees Celsius, transferred it to a cryo-electron microscope, and started collecting data. Less than 30 minutes passed from opening the jar to seeing progesterone’s structure, Gonen says. His team tested eight more commercial powders and obtained similar results, even after mixing several of them together.

Knowing that the powders had probably all been crystallized during manufacturing, the team wanted to test compounds that were instead newly synthesized, and not crystallized by scientists. They mixed four of these compounds, separated them via a common purification technique, and analyzed them by MicroED. The technique produced structures for two of the four compounds, which had formed crystals spontaneously. Gonen believes the other two might have worked had the team tried to crystallize them first.

Gonen doesn’t see x-ray crystallography or other structure-identification methods going away anytime soon. Some samples will be more amenable to one method over another, and the information each method supplies varies in useful ways, he says. But now, the natural ability of small molecules to form crystals can be harnessed by chemists in a way that wasn’t before possible.

“This is a perfect example of what happens when two fields that normally don’t talk to one another get together and cross-pollinate,” Gonen says.