HHMI scientists have determined the three-dimensional structure of two proteins that help keep the body's clocks in sync. 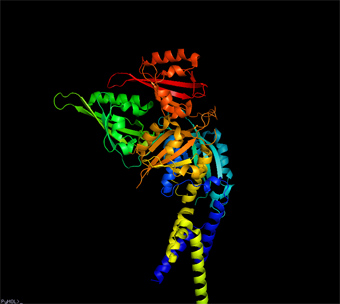 Howard Hughes Medical Institute scientists have determined the three-dimensional structure of two proteins that help keep the body's clocks in sync. The proteins, CLOCK and BMAL1, bind to each other to regulate the activity of thousands of genes whose expression fluctuates throughout the course of a day. Knowing the structure of the CLOCK:BMAL1 complex will help researchers understand the intricacies of how this regulation is carried out and how mutations in each protein lead the biological clock to go awry.

Every 24 hours, millions of "clocks" inside of our cells reset, helping to tune sleep patterns, blood pressure, and metabolism. When CLOCK and BMAL1 bind to one another inside cells, they initiate the first genetic events that coordinate this 24-hour cycle. "CLOCK and BMAL1 are really the batteries of the biological clock," says HHMI investigator Joseph S. Takahashi of the University of Texas Southwestern Medical Center, whose findings on the CLOCK:BMAL1 structure are published in the May 31, 2012, online version of the journal Science. "They are the key activators of the whole genomic regulation system."

The Clock gene was the first mammalian gene found to contribute to the body's circadian rhythms. Takahashi's team published the initial data on the Clock gene in a series of papers spanning 1994 to 1997. Since then, they've uncovered hundreds to thousands of genes under the control of CLOCK that fluctuate in sync with the biological clock in mammals.

"What's amazing is that we've now found out that almost every cell in your body has a clock," says Takahashi. "Over the past five years, the role of those clocks in peripheral tissues has really come to the forefront."

Researchers studying circadian rhythms have used biochemistry and genetics to piece together rough outlines of how each circadian protein interacts with CLOCK. But until now, they'd never been able to visualize the detailed molecular structure of the CLOCK protein. Seeing such a structure would allow them to visualize how different proteins can bind to CLOCK at the same time, or compete for binding spots, and how mutations known to alter circadian rhythms affect this binding.

Takahashi notes that CLOCK and BMAL1 are part of a large family of proteins, known as bHLH-PAS proteins (a name that refers to both to the shape of the protein and some better known members of the family), involved in functions ranging from responding to environmental contaminants and low-oxygen levels to the creation of new nerve cells. "It's not just CLOCK for which we didn't have a structure," says Takahashi. "This class of protein had never been solved at the crystallographic level before."

Takahashi explained that researchers had struggled to generate circadian proteins in the crystalline form necessary to determine structure using x-ray crystallography, but by experimenting with different conditions, his team was able to purify CLOCK bound to BMAL1. Rather than use the full-length version of each protein, they created a version consisting of only the pieces known to interact with each other. Having shorter proteins made the process easier.

The scientists discovered that CLOCK and BMAL1, when together, are closely intertwined. CLOCK has a groove in the center of its interface that's key to binding. A single amino acid of BMAL1 fits perfectly into the groove. Other proteins that bind to CLOCK likely take advantage of the same spot. Future research will look into the exact positions in which other circadian rhythm proteins bind to the complex, and how mutations to each protein affect the structure.

"Since these are truncated versions of the proteins, what we'd really like to do is to go on to get full-length structures," says Takahashi. They also want to understand how the Cryptochrome and Period proteins that turn off the activity of CLOCK bind to the CLOCK:BMAL1 complex. But that will take time.