Comparing the DNA of fish with and without spiny pelvic hindfins provides evidence that evolution can leap rather than shuffle. 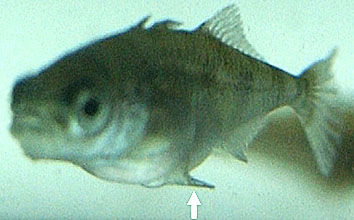 A single genetic adjustment is enough to help a small fish make a big change. According to new research by Howard Hughes Medical Institute (HHMI) scientists, losing a short stretch of DNA causes stickleback fish to lose their pelvic hindfins—a major skeletal transformation that confers an evolutionary advantage in many different lakes around the world.

Biologists have been debating since Darwin's time about whether evolution can proceed in a single large step or if numerous, individually minor changes are necessary. The new study, reported in the December 10, 2009, issue of Science Express and led by HHMI investigator David Kingsley of Stanford University, provides evidence that evolution can leap rather than shuffle.

“You don’t eliminate everything the gene does, you change how it is expressed in a particular tissue.

The stickleback is an evolutionary biologist’s dream. The fish have evolved many different forms since the end of the last ice age, which occurred approximately 15,000 years ago. Melting of giant glacierscreated thousands of brand new lakes and streams in North America, Europe, and Asia. Many of these new environments were colonized by migratory marine sticklebacks. The spiny fish, which are one- to four-inches long, have been remarkably successful in adapting to various niches in their new freshwater habitats.

“The cool thing about the fish is that they have undergone this massive evolutionary experiment, evolving many of the same traitsagain and again at different locations around the world,” says Kingsley.

Side-by-side skeletal comparison of a marine and freshwater stickleback, showing the complete loss of pelvic structures in the freshwater fish.

Comparison of the pelvic structures of a freshwater stickleback and transgenic fish, in which spines grew after insertion of sequences of the Pitx1 gene normally found in marine sticklebacks.

For instance, ocean sticklebackshave both forefins for swimming, and pelvic hindfins for protection against soft-mouthed predators. The stickleback hindfins consist of prominent bony spines that the fishcan raise to make themselves more difficult to swallow by other fish.In freshwater lakes with trout that snack on sticklebacks, the sticklebackshave usually hung onto their spines for protection. Although spines may cause soft-mouthed trout to spit out a stickleback, the spines can also give bugs like dragonflies a place to hold onto and gnaw on a stickleback meal. In many lakes where predatory fish are absent, where calcium levels are low, and where there are lots of bugs that can grab and eat sticklebacks, sticklebacks have repeatedly evolved complete loss of pelvic hindfin structures.

Kingsley’s previous studiesshowedthat the loss of the stickleback hindfin maps to a gene called Pitx1, which mediates the development of hindlimbs in many vertebrates, and is also required for pituitary and jaw development. The gene is active in the pelvis of marine sticklebacks, but its expression is turned off in the pelvis of freshwater fish without spines. Kingsleyand graduate student Frank Chan wondered what causes this change in the gene’s activity. Since the gene is essential for development of several tissues, the Stanford group and collaborators suspected some DNA sequence that regulatesPitx1 expression only in the pelvis might have been altered during evolution to drive the loss of spines in certain stickleback populations.

So the team took a fine-grained look at the DNA surrounding Pitx1, comparing the genomes of several populations of sticklebacks with and without spines. They found a short section of DNA that is present in spined sticklebacks has been repeatedly deleted infish without the armor. Further studies showed that the snippet of DNA cranks up Pitx1 activityspecifically in the pelvic region. Remarkably, reinserting the missing bit into a laboratory line of spineless fish caused the fish to grow spines again.

The missing region might be especially prone to disappearing acts. Its DNA sequence indicates that it’s an unusually floppy section of the genome, Kingsley says. Flexible bits of DNA are more likely to break during DNA replication. That feature may help explain why this particular gene is used over and over and over again.

Losing spines “is a major morphological change,” says Kingsley, “but the genetics is surprisingly simple.” Altering a region that controls a developmental gene rather than fiddling with the gene itself permits a large change in the fish’sstructure, while still preserving viability. “You don’t eliminate everything the gene does,” says Kingsley, “you change how it is expressedin a particular tissue.” The genetic variant responsible for eliminating spines also targets the change specifically to the pelvis, meaning that Pitx1 can still function normally in other parts of the body.

The study addresses evolution in wild fish, and the results show both how new variants can arise in particular DNA regions, and subsequently spread through populations as advantageous mutations. “I find it particularly fascinating that the same mechanism is used repeatedly in many different lakes,” says Kingsley. Cancer biologists have long recognized that particular genes are mutated repeatedly to confer a growth advantage on particular cell types.“We are seeing the same thing for evolutionary differences in whole animals. If you know the gene and mutation that has occurred in one stickleback, you can predict what’s happened in another. We don’t know all the rules yet, but we are getting the first tantalizing glimpses of how new variants arise, and how cells and organisms can use particular variants to change and adapt to new environments.”