Staying a Step Ahead of Cancer

HHMI scientists have designed a potential cancer therapy that uses a unique strategy to block a molecule that drives the growth of cancer. 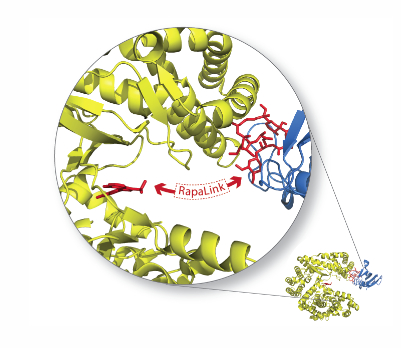 Howard Hughes Medical Institute scientists have designed a potential cancer therapy that uses a unique strategy to block mTOR, a molecule that helps drive the growth of many tumors. In animal experiments, the drug reduces the size of tumors that are resistant to earlier-generation mTOR inhibitors.

The work, reported May 18, 2016, in the journal Nature, was led by HHMI investigator Kevan Shokat at the University of California, San Francisco and Neal Rosen at Memorial Sloan Kettering Cancer Center.

Several anti-cancer drugs attempt to halt the growth of tumors by blocking mTOR, a key part of a growth-regulating network that is often disrupted in cancer cells. The oldest of these drugs, rapamycin and related molecules called rapalogs, have had some success in treating a few types of cancer, including kidney and breast cancers. Second-generation mTOR inhibitors, designed to block mTOR signaling more potently than rapalogs, are currently being evaluated in clinical trials.

Unfortunately, tumors can become resistant to rapalogs after months or years of effective treatment—and it's likely resistance will develop to second-generation mTOR inhibitors, too. It's a common problem with molecularly targeted cancer therapies, Shokat says. But if researchers understand the changes that make cancer cells resistant to a drug, they can work to develop a next-generation therapy.

Shokat and his colleagues wanted to get ahead of this problem, and began thinking about third-generation mTOR inhibitors without waiting for patients to develop resistance to the latest therapies. To anticipate how resistance might arise, Rosen's team exposed breast cancer-derived cells that they grew in the lab to either rapamycin or to a second-generation mTOR inhibitor, ADZ8055, for three months. Most of the cells died, but as expected, some found a way to survive and multiply.

The researchers examined those drug-resistant cells to identify the specific changes that had allowed them to thrive, reasoning that the same changes might arise in patients who received the drugs. Then Rosen's team searched for the mutations in genetic databases that catalogued tumors from cancer patients.

To their surprise, the mutations that had made their lab-grown cells resistant to ADZ8055 were present in some patients' tumors even before treatment. “That really was a shock, because usually those are drug-induced mutations,” Shokat says. The changes, present in about 10 percent of renal cell tumors (the most common type of kidney cancer), boosted mTOR activity, which meant they aided tumor growth with or without ADZ8055.

The researchers knew they needed an mTOR inhibitor that worked differently than its predecessors. To design one, Shokat took inspiration from the immune system. Antibodies excel at binding to rapidly changing targets, thanks to their Y-shaped structure with two antigen-binding tips. The two binding sites give antibodies strong affinity for their targets, Shokat says, and he wanted to mimic that strategy by creating an inhibitor that bound to mTOR in two places.

What's more, the two-pronged inhibitor can grasp mTOR even if it contains mutations that prevent simpler inhibitors from binding. That's because it's not essential that both mTOR binding sites are a perfect match for the drug. Shokat explains: Once one side of the inhibitor has latched on to its target, its other end is tethered close to its own binding pocket and thus likely latch on, too.

The scientists showed that Rapalink can get inside cancer cells and shut off mTOR, even if those cells are resistant to earlier generation inhibitors. They also tested Rapalink's ability to inhibit tumor growth in animal experiments, and found that it reduced the size of tumors that were resistant to first- or second-generation mTOR inhibitors. “It worked like a charm,” Shokat says.

The scientists have licensed Rapalink to Kura Oncology, which will continue to evaluate its potential as a cancer therapy. Shokat and Rosen are scientific advisors to Kura Oncology.