Stash of Stem Cells Found in a Human Parasite

Stem cells inside the parasite that causes schistosomiasis can regenerate worn-down organs, which may help explain how the parasites can live for years inside their host. 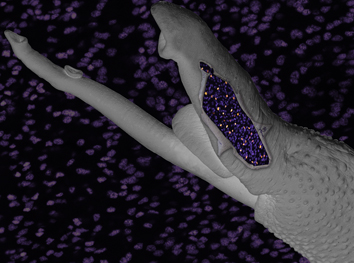 The parasites that cause schistosomiasis, one of the most common parasitic infections in the world, are notoriously long-lived. Researchers have now found stem cells inside the parasite that can regenerate worn-down organs, which may help explain how they can live for years or even decades inside their host.

Schistosomiasis is acquired when people come into contact with water infested with the larval form of the parasitic worm Schistosoma, known as schistosomes. Schistosomes mature in the body and lay eggs that cause inflammation and chronic illness. Schistosomes typically live for five to six years, but there have been reports of patients who still harbor parasites decades after infection.

People often wonder why we study the ‘lowly’ planarian, but this work provides an example of how basic biology can lead you... to findings that are directly relevant to important public health problems.

According to new research from Howard Hughes Medical Institute (HHMI) investigator Phillip Newmark, collections of stem cells that can help repair the worms’ bodies as they age could explain how the worms survive for so many years. The new findings were published online on February 20, 2013, in the journal Nature.

The stem cells that Newmark’s team found closely resemble stem cells in planaria, free-living relatives of the parasitic worms. Planaria rely on these cells, called neoblasts, to regenerate lost body parts. Whereas most adult stem cells in mammals have a limited set of possible fates—blood stem cells can give rise only to various types of blood cells, for example —planarian neoblasts can turn into any cell in the worm’s body under the right circumstances.

Newmark’s lab at the University of Illinois at Urbana-Champaign has spent years focused on planaria, so they knew many details about planarian neoblasts—what they look like, what genes they express, and how they proliferate. They also knew that in uninjured planarians, neoblasts maintain tissues that undergo normal wear and tear over the worm’s lifetime.

“We began to wonder whether schistosomes have equivalent cells and whether such cells could be partially responsible for their longevity,” says Newmark.

Following this hunch, and using what they knew about planarian neoblasts, post-doctoral fellow Jim Collins, Newmark, and their colleagues hunted for similar cells inSchistosoma mansoni, the most widespread species of human-infecting schistosomes.

Their first step was to look for actively dividing cells in the parasites. To do this, they grew worms in culture and added tags that would label newly replicated DNA as cells prepare to divide; this label could later be visualized by fluorescence. Following this fluorescent tag, they saw a collection of proliferating cells inside the worm’s body, separate from any organs.

The researchers isolated those cells from the schistosomes and studied them individually. They looked like typical stem cells, filled with a large nucleus and a small amount of cytoplasm that left little room for any cell-type-specific functionality. Newmark’s lab observed the cells and found that they often divided to give rise to two different cells: one cell that continued dividing, and another cell that did not.

To find out whether the schistosome cells could give rise to multiple types of cells, Newmark’s team added the label for dividing cells to mice infected with schistosomes, waited a week, and then harvested the parasites to see where the tag ended up. They could detect labeled cells in the intestines and muscles of the schistosomes, suggesting that stem cells incorporating the labels had developed into both intestinal and muscle cells.

Years of previous study on planarians by many groups paved the way for this type of work on schistosomes, Newmark says.

“The cells we found in the schistosome look remarkably like planarian neoblasts. They aren’t associated with any one organ, but can give rise to multiple cell types. People often wonder why we study the ‘lowly’ planarian, but this work provides an example of how basic biology can lead you, in unanticipated and exciting ways, to findings that are directly relevant to important public health problems.”

Newmark says the stem cells aren’t necessarily the sole reason schistosome parasites survive for so many years, but their ability to replenish multiple cell types likely plays a role. More research is needed to find out how the cells truly affect lifespan, as well as what factors in the mouse or human host spur the parasite’s stem cells to divide, and whether the parasites maintain similar stem cells during other stages of their life cycle.

The researchers hope that with more work, scientists will be able to pinpoint a way to kill off the schistosome stem cells, potentially shortening the worm’s lifespan and treating schistosome infections in people.