With the discovery of a sodium taste receptor, researchers have now identified the molecular receptors, cells, and coding logic for all five basic tastes. 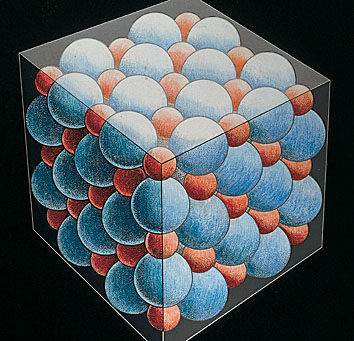 Taste by taste, Howard Hughes Medical Institute (HHMI) investigator Charles S. Zuker and his colleagues have pinpointed the receptor molecules in the tongue that tell the brain whether a substance is sweet, bitter, sour, or savory (the taste also known as umami). But until now, no one knew how the tongue picked up on the universally appealing fifth taste–salty.

“Validating the salt receptor nicely completes the search for the receptors mediating the five basic tastes,” says Zuker, who led a new study identifying the sodium taste receptor. Jayaram Chandrashekar was the lead author, and Christina Kuhn, Yuki Oka, David Yarmolinsky, Edith Hummler, and Nick Ryba, Zuker’s long-term collaborator, are co-authors on the report, which was published in the January 27, 2010, issue of the journal Nature.

Validating the salt receptor nicely completes the search for the receptors mediating the five basic tastes.

Zuker wants to do more than understand why sugar is sweet. He wants to know how the brain can turn reception into perception. How do the physical and chemical stimuli that we take in all the time—through sight, hearing, taste, touch, and smell—turn into signals that the brain choreographs into percepts? He says his team’s overall goal is to understand how the brain creates internal representations of the outside world.

Taste provides a readily accessible route to study perception, with the five basic flavors providing an attractively small number of variables to account for. In addition, taste triggers strong, predictable responses in animals: Bitter and sour flavors drive animals away, while sugary, mildly salty, and savory flavors are attractive. These responses are consistent across the animal kingdom, suggesting that taste perception is an evolutionarily ancient system that varies little from species to species.

Over the past decade, Zuker, whose lab is now at Columbia University College of Physicians and Surgeons, and Nicholas Ryba of the National Institute of Dental and Craniofacial Research have discovered the molecular receptors, cells, and coding logic for all five basic tastes. Their work has shown that all five tastes are mediated by dedicated cells, each tuned to a single taste modality.

The sodium taste receptor, called the epithelial sodium channel (ENaC), had been hypothesized as a candidate to salty sensation for 25 years, says Zuker. But technological hurdles had hampered efforts to show that conclusively.

The necessary technical advance came when the team managed to generate mice that had the gene for the ENaC receptor in most of their cells, but not in their tongues. Entirely deleting the ENaC gene causes animals to die early, as the ENaC channel plays a critical role in the kidneys, lungs, and other organs. To keep the animals alive, Zuker and his colleagues used sophisticated genetic engineering to breed mice that lacked functioning ENaC receptors only in their taste receptor cells.

The engineered mice responded normally to sweet, umami, sour, and bitter flavors. But they had no taste for sodium chloride. Even they had been deliberately depleted of salt—a state that usually leads to eager slurping of a briny drink—mice without ENaC in their taste receptor cells displayed little interest in saline solutions. “While this result was largely expected, it’s very satisfying to validate the theory,” Zuker says.

To visualize the taste cells in action, Zuker’s team created taste cells that “light-up” when activated, allowing the researchers to drip flavor molecules over the cells and then map which ones turn on. Experiments with this system highlighted a population of taste receptor cells that activate only when stimulated with low concentrations of sodium chloride. These salt-tasting cells contain ENaC channels but do not display receptors for the other four tastes.

The researchers also discovered that a separate population of cells responds to very high concentrations of sodium chloride as well as to non-sodium salts, such as potassium chloride, all of which animals find aversive.

“We now know that salt is tasted in two distinct ways,” says Zuker, who is also a senior fellow at HHMI’s Janelia Farm Research Campus. “Low concentrations of sodium, which are typically attractive, are detected by one type of receptor and one type of taste receptor cell (i.e. the classic sodium-sensing cells), while high concentrations of salt, which animals try to avoid, are sensed by a completely different pathway.”

Now that Zuker and colleagues have indentified the five cell types responsible for taste, they plan to trace the connections those cells make to the brain and, eventually, map how the brain responds to tastes and flavors.