Two critical genes that serve as beacons and give cells a much needed sense of direction in the chaotic days of early development have been identified by HHMI researchers at the University of Toronto. 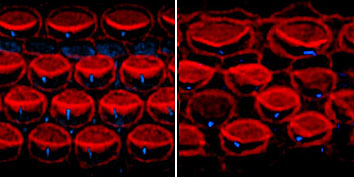 Two critical genes that serve as beacons and give cells a much needed sense of direction in the chaotic days of early development have been identified by researchers at the University of Toronto.

The new findings, from the laboratory of Jeffrey L. Wrana, a Howard Hughes Medical Institute international research scholar, were published April 17, 2009, in the journal Cell, and help explain how a cell determines its sense of space. A better understanding of this phenomenon, called planar cell polarity, may also help scientists learn how improper cellular orientation can lead to spina bifida, polycystic kidney disease, and metastatic cancer. Each of these illnesses involves cells that don’t have a proper sense of direction, so they cannot tell which way they are going.

Our experimental results were unexpected, but also exciting because they suggest the Smurf genes are coordinating different types of cell polarity.

In a developing embryo, cells need to be in the right position at the right time. To get to their proper destination, cells must understand the difference between top and bottom, forward and backward. If this orientation is off just a little, development can be disrupted or derailed. In spina bifida, for example, cells can fail to recognize front from back, leading to improper formation of the spine.

In the past decade, Wrana has helped identify the importance of two Smurf genes (Smurf stands for Smad ubiquitination regulatory factor) in helping cells move and distinguish top from bottom. Cells rely on cues from their neighbors to sense this kind of orientation, and Wrana has been trying to understand how the Smurf genes facilitate the process. Until now, he didn’t know Smurf proteins had anything to with orienting cells in the backward/forward direction, as well.

“Our results were unexpected, but also exciting because they suggest the Smurf genes are coordinating different types of cell polarity,” says Wrana, who also works at Mount Sinai Hospital in Toronto.

As part of his study, Wrana and his team genetically engineered mouse embryos so they did not have functional copies of both Smurf genes, but the embryos failed to develop properly and died before birth. When Wrana examined the embryos, he observed that they had an atypical shape—they were short and wide instead of long and thin. In addition, he saw that the neural tube—the precursor to the spinal cord—had failed to close into its proper tubular shape. This type of developmental anomaly is similar to what happens in human babies who are born with spina bifida. The findings surprised Wrana because he did not expect that the changes in top/bottom polarity would be vital in this aspect of embryo development.

Instead, these characteristics suggested that the Smurf genes were related to an important network of genes called the Wnt signaling pathway. When this pathway goes awry in early development—which can happen for a variety of reasons—a number of defects can arise, including those Wrana saw in his Smurf-deficient mice. Researchers had known that Wnt signaling helps establish planar cell polarity, so Wrana investigated whether Smurfs were involved, too.

His first stop was the inner ear of the embryonic mouse. The inner ear contains hair cells, which vibrate in response to sound. To do their job, hair cells must line up neatly in a hexagonal pattern, like paving stones on a cobblestone street—a pattern made possible by planar cell polarity. But in the Smurf-deficient mice, the hair cells looked like they were laid by a drunken mason. “In the normal embryos, the hair cells were all pointing the same way in a beautiful array,” Wrana says. “But in the mutants they were disorganized and rotated and pointing the wrong way.”

In healthy cells that know front from back, Prickle accumulates on one side of the cell, and Disheveled on the other side. This lopsidedness appears critical for planar cell polarity. Wrana found that the Smurf genes actually create this lopsidedness by destroying Prickle on one side of the cell. We believe that through this destruction of Prickle, cells establish an asymmetrical distribution of proteins, and that’s how the cells become polarized properly,” Wrana says.

Wrana is now investigating what role Smurf genes play in other tissues, such as the trachea and kidneys, where planar cell polarity is known to be important. He also wants to study their role in diseases. For example, “there are lots of hints that planar cell polarity is important in cancer,” he says. Other researchers have found that cancer cells often have an excess of the proteins made by the Smurf genes. “We think the elevated expression of Smurfs interferes with the polarity of the cells,” he says. “Within the tumor, the cells become disorganized and display aberrant behaviors, which may help them escape and metastasize.”