Single Gene Is Central to Circadian Rhythms in Plants and Animals

A pair of international research scholars has discovered a deep connection between the circadian clocks of plants and animals. 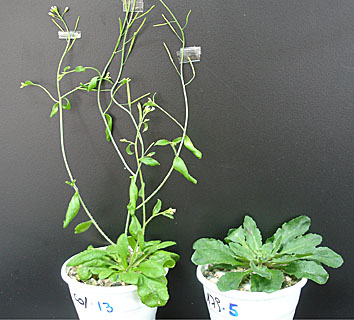 Now, a pair of Howard Hughes Medical Institute international research scholars at the University of Buenos Aires in Argentina has discovered a deep connection between the circadian clocks of plants and animals. The shared piece of machinery is known as PRMT5, a gene involved in creating alternative forms of circadian rhythm-related proteins in the nucleus of the cell.

PRMT5 is regulated by other circadian genes in fruit flies and in a plant commonly used to study genetics, the mustard plant Arabidopsis thaliana. This regulation sets up a feedback loop that likely controls the daily fluctuations of thousands of plant genes.

“We think the PRMT5 gene lies at the heart of the circadian systems in both plants and animals,” says Marcelo Yanovsky, who led the work, which is published October 20, 2010, in Nature. “Circadian clocks most likely evolved independently in plants and animals, but in the way these clocks control physiologic processes, plants and animals use the same tool, PRMT5.”

Alberto Kornblihtt, the second HHMI international research scholar who contributed to the work, agrees. “It is very interesting to see that one of the key regulators of circadian rhythms is conserved in evolution among plants and insects. But because the actual genes carrying out the actions of circadian clock are different, we think this is an example of convergent evolution.”

We think the PRMT5 gene lies at the heart of the circadian systems in both plants and animals.

Yanovsky has been striving to dissect the biology behind circadian clocks for 15 years, and he chose to use plants as a tool for working out the genetics underlying the phenomenon. After all, the ancient Greeks knew about circadian cycles in plants 2,500 years ago, when Greek writers noted that leaves move in a predictable pattern throughout the day. Also, the genetics of Arabidopsis, a relative of mustard and a plant commonly used in laboratory research, are easy to manipulate.

For this study, Yanovsky and his colleagues introduced random genetic mutations into hundreds of Arabidopsis plants and then looked for tell-tale signs of defects in the plants’ circadian patterns. One such sign was easy to pick out—the appearance of unusually tall plants. Abnormally tall plants might result from mutations affecting circadian clock genes because cell elongation is under control of the circadian clock. After picking out one particularly tall plant, Yanovsky’s team set up a camera to take pictures of its leaves every two hours. The leaves turned not in a 24-hour pattern, as they should, but in a 27-hour cycle.

A screen of the plant’s genome revealed a mutation in PRMT5, a gene that had never been implicated in circadian rhythms before. A review of genetics databases showed that PRMT5 exists in every organism from yeast to man, and that it creates an enzyme that operates as a catalyst within a cell’s nucleus. The specific job of the enzyme is to add a chemical tag to certain proteins. Specifically, the enzyme adds that tag to a group of proteins in the nucleus that controls alternative splicing of RNA, the process by which a single gene can produce variations of the same protein.

Yanovksy and his colleagues then enlisted Kornblihtt, who has been studying alternative splicing for 20 years. A series of experiments showed that the enzyme made by PRMT5 rises and falls in a regular rhythm during the day—suggesting that the gene is involved in the circadian cycle. Furthermore, the mutated form of PRMT5 in Arabidopsis produced alternative splices of one of the key circadian clock genes, known as PRR9. The mutation in the PRMT5 enzyme also produced alternative versions of many other proteins.

To see if PRMT5 also impacted circadian rhythms in animals, Yanovsky’s team, in collaboration with Fernanda Ceriani, a former HHMI international research scholar at Leloir Institute Foundation, obtained fruit flies with mutated PRMT5 genes. And indeed, instead of displaying a normal pattern of activity during the day—active in the morning, resting in the afternoon, and active again in the evening—the mutant flies displayed the same amount of activity across the entire day. That suggested that PRMT5 was also important in circadian rhythms in the flies. And, again, Konblihtt found that the mutant PRMT5 enzyme produced alternative splices of clock-related genes, as well as many other genes, in the flies.

“We saw impacts of PRMT5 on alternative splicing both in plants and flies,” says Kornblihtt, who first met Yanovksy in 1988 when he was a freshman in Kornblihtt’s introductory biology lecture. “And the impact on splicing events are similar in both, suggesting the role of this protein in regulating circadian rhythms is quite ancient.”