By investigating the cause of a fatal snake disease, scientists have found a virus that links two known virus families that can cause fatal hemorrhagic fevers in humans. 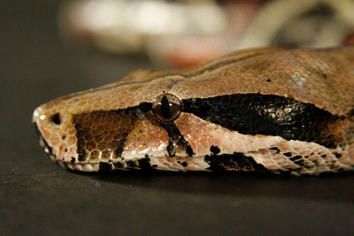 By investigating the cause of a fatal snake disease, scientists have found a virus that shares characteristics with two known virus families that can cause fatal hemorrhagic fevers in humans. Filoviruses and arenaviruses are genetically distinct and have previously been found only in mammals, but the newly identified virus hints at an evolutionary relationship between them.

Howard Hughes Medical Institute investigator Joseph DeRisi and his colleagues published their findings, which they say underscore the genetic diversity of infectious viruses, in the open-access online journal mBio on August 14, 2012.

DeRisi, who studies parasitic and viral infections at the University of California, San Francisco, notes that almost all recent diseases in humans have origins in viruses from animal populations. “But we know very little about the natural ecology of many of the viruses that might impact human health,” DeRisi says. “One of the main goals of my lab is to investigate the source of infectious disease where the etiology—the cause—is not known.”

That’s why when DeRisi found a letter on his desk asking him to help uncover the cause of an infectious disease in snakes, he took a second look. The letter was from a concerned snake-owner who was worried about her boa constrictor, Larry. Larry’s veterinarian had heard of DeRisi’s research on bird viruses and suggested his owner see if she could interest him in inclusion body disease. The highly contagious disease is well-known at zoos and by exotic pet owners for the brain damage, behavioral changes, and wasting that it causes, for which there is no treatment.

We know very little about the natural ecology of many of the viruses that might impact human health.

“There was a veterinarian’s phone number at the bottom of the letter,” recalls DeRisi. “I called the vet, Chris Sanders, who said, ‘this is a probably the most important disease we’re worried about in domestic snakes in zoos and aquariums.’”

DeRisi learned that the tell-tale sign of the disease is the accumulation of proteins inside the snake’s cells. “Every cell in almost every tissue of the body is basically filling up with junk,” DeRisi says. “The origin of that junk was thought to be an unidentified virus replicating in the cells and putting itself together in these giant protein aggregates.”

When DeRisi decided to search for that virus, the California Academy of Sciences had recently reported an outbreak of inclusion body disease in their boa constrictors. Collaborating with Freeland Dunker, a veterinarian at the museum, DeRisi obtained samples of snake tissue from five boa constrictors that had suffered from the disease.

To identify the virus, Mark Stenglein, a postdoctoral researcher in the DeRisi lab, with the help of Jessica Franco, an undergraduate working in DeRisi’s lab through HHMI’s Exceptional Research Opportunity Program, used high-throughput sequencing methods to rapidly sequence all of the RNA in the cells of the sick snakes.

“In an infected cell, most of the RNA is from the snake,” says Stenglein. “About 95 percent of the sequences are snake RNA—but what is left over is viral RNA. That’s what we’re looking for.” The trick was to separate the snake RNA from the virus RNA by comparing sequences from the infected snake to the RNA sequences of a healthy snake.

“Here we had a bit of a problem,” DeRisi explains. “No boa constrictor genome had been sequenced.”

Fortuitously, DeRisi was in the process of organizing a contest, initiated by HHMI investigator David Haussler, in which teams compete to develop a computer program that assembles genetic sequences into a previously unknown animal genome. DeRisi suggested the “Assemblathon” competitors try assembling the boa constrictor genome. By the end of the competition, Stenglein had exactly what he needed to identify which of the genetic sequences from the diseased snakes were foreign and might belong to the virus.

When Stenglein studied the RNA sequences that were not present in the boa constrictor genome, he noticed several similarities to arenavirus genes. “Arenaviruses had only ever been found in mammals, so to find them in a reptile and potentially associated with this disease in snakes was immediately very interesting,” says Stenglein. “If you had asked me to predict what type of virus we would find, this is not what I would have predicted.

Next, using open-source software developed by Graham Ruby, another scientist in DeRisi’s lab, Stenglein assembled the genome of the virus from the viral RNA sequences. He found that the sequences from the snake virus belonged to four genes—one of which was most similar to genes found in filoviruses.

The scientists found genetic material from their newly identified virus in six of nine snakes with inclusion body disease. Those sequences were not present in any of the seventeen healthy snakes whose samples he tested. And when Stenglein introduced the virus into healthy boa constrictor cells, the virus replicated and the cells became clogged with protein aggregates just like those in snakes with inclusion body disease.

Understanding the link between the virus and disease should help improve diagnostics and slow the spread of inclusion body disease, DeRisi says, although it’s too soon to know for sure whether the newly identified virus is its direct cause. Further, he says, by showing that arenavirus infections are not limited to mammals and finding evidence that arenaviruses and filoviruses likely share a common ancestor, his team has learned some important biology about infectious disease.