With the flick of a genetic light switch, researchers have reduced symptoms of anxiety in laboratory mice. 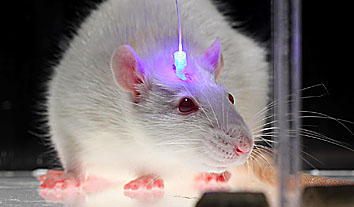 With the flick of a genetic light switch, researchers have reduced symptoms of anxiety in laboratory mice almost instantaneously by manipulating the activity of specific neurons in the brain.

Anxiety is the most common psychiatric disease, but little is known about the underlying neural circuits. Howard Hughes Medical Institute (HHMI) early career scientist Karl Deisseroth and his colleagues used a set of research tools developed in his lab that enables use of light to control neural activity in a very precise way. Using this technique, the researchers have found that a cluster of neurons in the amygdala—an almond-shaped structure in the brain—contribute to the control of apprehension in the absence of any immediate threat. They found that two distinct neural circuits within the amygdala have opposing effects on anxiety, and that manipulating the activity of those pathways elicits strikingly rapid effects on anxiety-related behaviors in mice.

The findings, published online March 9, 2011, in the journal Nature, begin to clarify the biological basis of a mental disorder that is often associated with unnecessary stigma that Deisseroth says can make people afflicted by it reluctant to seek treatment. “The more we understand how something really works biologically, the more it has a profound effect on the patients and on the families and on society, because it points to the physical and real nature of the disorder,” he says.

Stimulating specific pathways in the brain of a mouse can alter its anxiety-related behavior, such as how much time it spends exploring open areas. The session shown is divided into three epochs, and light stimulation is delivered to the BLA terminals in the CeA via an optical fiber only during the second epoch, as indicated by the appearance of the blue text detailing light stimulation parameters.
Video: Karl Deisseroth

“What we actually found was something that could not have been identified by any earlier method,” he says.

About six years ago, Deisseroth, a psychiatrist and neuroscientist at Stanford University, found himself becoming increasingly frustrated with the lack of rigorous, scientific understanding of the neural basis of mental health disorders. So he set out to equip researchers with the tools they needed to tease out exactly how individual neurons in the brain communicate with one another. Deisseroth reasoned that understanding more about how neurons communicate would likely lead to new insights about disorders of the brain and central nervous system. The method he developed, called optogenetics, introduces light-sensitive proteins from algae and bacteria into targeted sets of cells so that scientists can switch those cells on and off with a pulse of light.

The technique has already proven valuable in a variety of research applications. When expressed in animals, the light-sensitive channels can be used to excite or inhibit the activity of neurons, and thus regulate diverse behaviors such as movement, depression, drug addiction and fear. “I always am amazed by how remarkable it is that we’ve been able to take these tools from algae and come to a deeper understanding of ourselves as mammals,” Deisseroth says. But this latest work on the neural circuits that control anxiety, he says, has been particularly satisfying.

“It’s a culminating moment for me,” he says. “The whole reason I started the optogenetic strategy was to try to understand and to probe neural circuits with better precision in order to help us understand psychiatric symptoms better.”

Traditional methods of controlling neural activity in the brain, such as driving bursts of activity with electrodes, are not very precise. They typically control cells that are physically clustered near one another, but may not be of the same type. And fine-tuning these types of studies is simply not possible. “If you introduce an electrode, that certainly doesn’t distinguish one kind of axon, or wire of communication, from another in the brain,” Deisseroth says.

With the invention of optogenetic techniques, Deisseroth and others have opened the way for much more focused research on brain activity. In the new study, Deisseroth and his team used the approach to disentangle the roles of separate circuits within the amygdala. Although past studies have demonstrated that anxious people show greater activity in this brain region and animals that lack it do not exhibit normal fear responses, little is known about the cellular pathways that govern anxiety.

To examine this question, Deisseroth expressed light-sensitive channelrhodopsin proteins in the basolateral amygdala of mice. These neurons send projections to another area of the amygdala called the central nucleus. Exciting projections that connected the basolateral amygdala to the central nucleus of the amygdala activated only one pathway that reduces apprehension. When the researchers turned on these connections by shining blue light on these projections, they found that mice showed fewer signs of worry: They spent more time exploring open areas in standard tests of anxiety. When the researchers instead shut off the connections with a yellow light, they noticed that the mice were more nervous. In contrast, shining light on the bodies of the basolateral amygdala cells had little effect on the animals’ behavior, since this activated the cells’ connections to pathways that both trigger and inhibit anxiety, essentially canceling out one another.

The near-instantaneous, bidirectional control of anxiety that they were able to achieve with optogenetics surprised Deisseroth, he said. “Most thinking [in the field] had suggested that anxiety was a very stable state in the brain,” he says. “What we found is that it’s really something that’s under real-time continuous control.”

The ability to manage one’s level of apprehension and quickly change it depending on external circumstances is critical. “The more different pathways you have that deliver different kinds of anxiety control, the more you can finely regulate it and adapt the organism’s heightened state to the situation,” Deisseroth says. “It’s a wonderful design because it provides a lot of opportunities for regulation.”