Shirley Tilghman to Deliver Next Public Talk at Janelia

On May 13, Princeton University President Emerita Shirley Tilghman will deliver a talk, “The Wild and Wacky World of Epigenetics” at 7:00 p.m. at Janelia Research Campus.

Princeton University President Emerita Shirley Tilghman will deliver the next lecture in the Dialogues of Discovery series at Janelia Research Campus in Ashburn, Virginia. Tilghman’s talk, “The Wild and Wacky World of Epigenetics,” is on Wednesday, May 13 at 7:00 p.m. Tickets are available at wildwackyepigenetics.eventbrite.com. 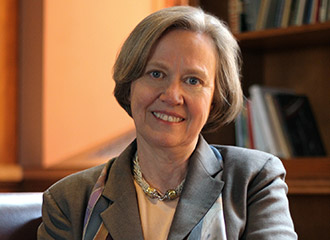 All Dialogues of Discovery lectures are free and open to the public, but tickets are required for admission, and seating is limited to 250 people. See www.janelia.org/events for more information, to sign up to receive email notifications about upcoming lectures, and to watch past lectures.

Tilghman will explore the underlying molecular epigenetic mechanisms that are revealing a wacky new world of gene regulation. If Gregor Mendel, the 19th century father of modern genetics, were alive today, his head would be spinning. The simple rules of Mendelian inheritance, which he painstakingly worked out with garden peas, have had to be substantially expanded and revised in the last several decades to accommodate the fact that genes are not nearly as well behaved as he thought. A pristine gene, free of any debilitating mutations, may or may not be expressed, depending upon parental inheritance, environmental influences, and even pure chance.  This phenomenon, in which external factors influence the decision of a gene to be expressed or remain silent, is called epigenetics.

Tilghman was elected Princeton University’s 19th president on May 5, 2001.  An exceptional teacher and world-renowned scholar and leader in the field of molecular biology, she served on the Princeton faculty for 15 years before being named president.  During her tenure the university expanded its undergraduate and graduate student bodies, and instituted a four-year college system.  She oversaw the creation of major new academic programs, including the Princeton Neuroscience Institute, the Andlinger Center for Energy and the Environment and the Lewis Center for the Arts.  Upon the completion of her term in June of 2013, she returned to the faculty.

During her scientific career as a mammalian developmental geneticist, she studied the way in which genes are organized in the genome and regulated during early development.  A member of the National Research Council’s committee that set the blueprint for the United States effort in the Human Genome Project, she also was one of the founding members of the National Advisory Council of the Human Genome Project for the National Institutes of Health.  Tilghman was appointed an investigator of the Howard Hughes Medical Institute in 1988, and in 1998 was named the founding director of Princeton’s multidisciplinary Lewis-Sigler Institute for Integrative Genomics.  She is the recipient of a Lifetime Achievement Award from the Society for Developmental Biology, the Genetics Society of America Medal, and the L’Oreal-UNESCO Award for Women in Science.  She is a member of the American Philosophical Society, the National Academy of Sciences, the Institute of Medicine and the Royal Society of London.  She serves as a trustee of Amherst College, the Carnegie Endowment for International Peace, the Institute for Advanced Study, and the King Abdullah University of Science and Technology, and as a director of Google Inc.