Seeing the Brain’s Circuits with a New Clarity

A new technique transforms biological tissue into an optically transparent sample that retains its original structure and molecular information. 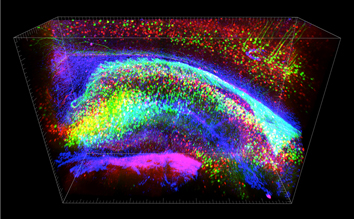 For scientists working to uncover the mysteries of the brain, fat is a problem. The fats inside cells bend and scatter light, obscuring researchers’ views when they try to peer deep into tissue. A new technique developed by Howard Hughes Medical Institute (HHMI) scientists solves that problem by removing the fat from the brain and supporting the remaining brain structures in a hydrogel—literally giving scientists a clear view of an intact brain.

The technique, called CLARITY, transforms biological tissue into an optically transparent sample that retains its original structure and molecular information. “You can turn a mouse brain into essentially a completely transparent form within four to five days,” says HHMI Early Career Scientists Karl Deisseroth, who led the development of the new technique. The method has the potential to enable a new understanding of the local and global connectivity of circuits in the brain, says Deisseroth, who studies the dynamics of neural circuits in his lab at Stanford University. Deisseroth’s team reports on its ability to use the technique to clarify the intact brain of a mouse, as well as samples of postmortem human brain tissue, on April 10, 2013 in the journal Nature.

You can turn a mouse brain into essentially a completely transparent form within four to five days.

Tissue transformed by CLARITY is permeable, so specific proteins can be labeled for study. It is also stable enough to withstand treatments that remove labeling molecules so that the same tissue can be reexamined many times. Under the microscope, a mouse brain treated with CLARITY reveals the long-distance connections between neurons in distant parts of the brain, as well as the fine details of each cell’s structure. For clinical samples, CLARITY reveals three-dimensional structures that would be difficult to discern in thinly sectioned tissue.

A few years ago, Deisseroth’s lab developed optogenetics, a light-based technology that gives researchers precise control over the activity of specific nerve cells in living mice. “That’s been useful, but it hasn’t allowed us to come to a deeper, circuit-level understanding of how physiology and behavior arise from the neurons that we target,” he says. “That’s because we don’t know in detail how those neurons are connected in the tissue, both locally and globally. We can control cells and see how that affects behavior—but to turn that into a deep understanding of how the circuitry works has been a challenge,” he says.

Understanding how the neurons they are studying were connected to others in the brain was difficult with existing technology. To visualize neurons under a light microscope, scientists must slice the tissue into very thin sections, losing the context of surrounding tissue. Reconstructing even a small volume of the original tissue’s three-dimensional structure from a series of images is labor-intensive and error-prone. Other researchers have devised chemical methods to reduce light scattering, making the tissue more transparent, but the resulting tissue is not accessible to fluorescent labeling molecules.

Deisseroth says that the main barrier to light penetration through biological tissues is scattering at the lipid boundaries that form structural membranes in and around cells. Lipids are also a problem because they interfere with the penetration of antibodies used to label specific molecules and identify cells. This is true of all biological tissue, he says, but lipid boundaries are particularly abundant in the brain. “But even though lipids are important structurally, and some lipids do have information in them, we think most of the interesting information in the brain is carried by proteins and nucleic acids,” he says. Removing the fat from the brain would preserve that information while allowing access to both light and macromolecules like antibodies. Unfortunately, removing lipids also destroys tissue structure and allow proteins to leak out. “So we knew we needed to build an infrastructure within the tissue,” Deisseroth says. His team, led by postdoctoral researcher Kwanghun Chung, experimented with various molecular supports structures, and settled on a hydrogel. Once the gel forms inside the tissue—capturing its proteins and genetic material—the lipids can be removed.

The first step of CLARITY is to infuse tissue with hydrogel monomers—the building blocks of the gel—and chemically link them to the proteins, DNA, and RNA inside the tissue. Importantly, lipids do not bind to gel components and remain free. The infused tissue is heated, causing the gel monomers to link together into a three-dimensional network that supports the non-lipid components of the tissue. Finally, lipids are removed from the gel using strong detergents and an electrical current.

Brain tissue treated with CLARITY emerges from the process transparent and accessible to biological labeling molecules. With the lipid barriers gone, labeling antibodies permeated the porous hydrogel, enabling specific proteins and structures to be visualized under the microscope. Further, the hydrogel structure was stable enough to withstand the harsh treatments needed to remove those labels, meaning the researchers could reanalyze the same brain tissue with a focus on different proteins.

When they tested CLARITY on clinical samples of postmortem human brain, the team had similar results. The technique successfully clarified a half-millimeter-thick sample of donated brain tissue from an autistic patient that had been stored in a brain bank for more than six years. Microscope imaging of the clarified block of brain tissue revealed that it contained some neurons that formed connections not only with neighboring cells, but also with themselves. It would be difficult to find and verify such an unusual structure using traditional methods, Deisseroth says. “If you had thin sections, it would be more challenging to be certain that you’d aligned things right. But with CLARITY, the tissue has never been taken apart, and we can look at it from many angles and with many different stains—so we can be confident of these unusual structures,” he says.

Deisseroth says CLARITY will enable researchers to visualize the circuitry in the brain with a more global perspective than was previously possible, and could be particularly valuable when used to complement methods of manipulating neuronal activity, including optogenetics. He has created a website to share the technique—clarityresourcecenter.org—and says other labs are already finding useful applications of the technology, such as analyzing human tissue stored in brain banks and visualizing cancer cells within the three-dimensional context of a biopsy sample. Deisseroth’s lab will use CLARITY to enhance what they are learning about the activity of cells in the mouse brain, but, he says, the technique should be applicable to any tissue from any organism.