New research from HHMI scientists reveals how a foreign-DNA-destroying system, known as CRISPR, efficiently locates its DNA targets within a bacterial genome. 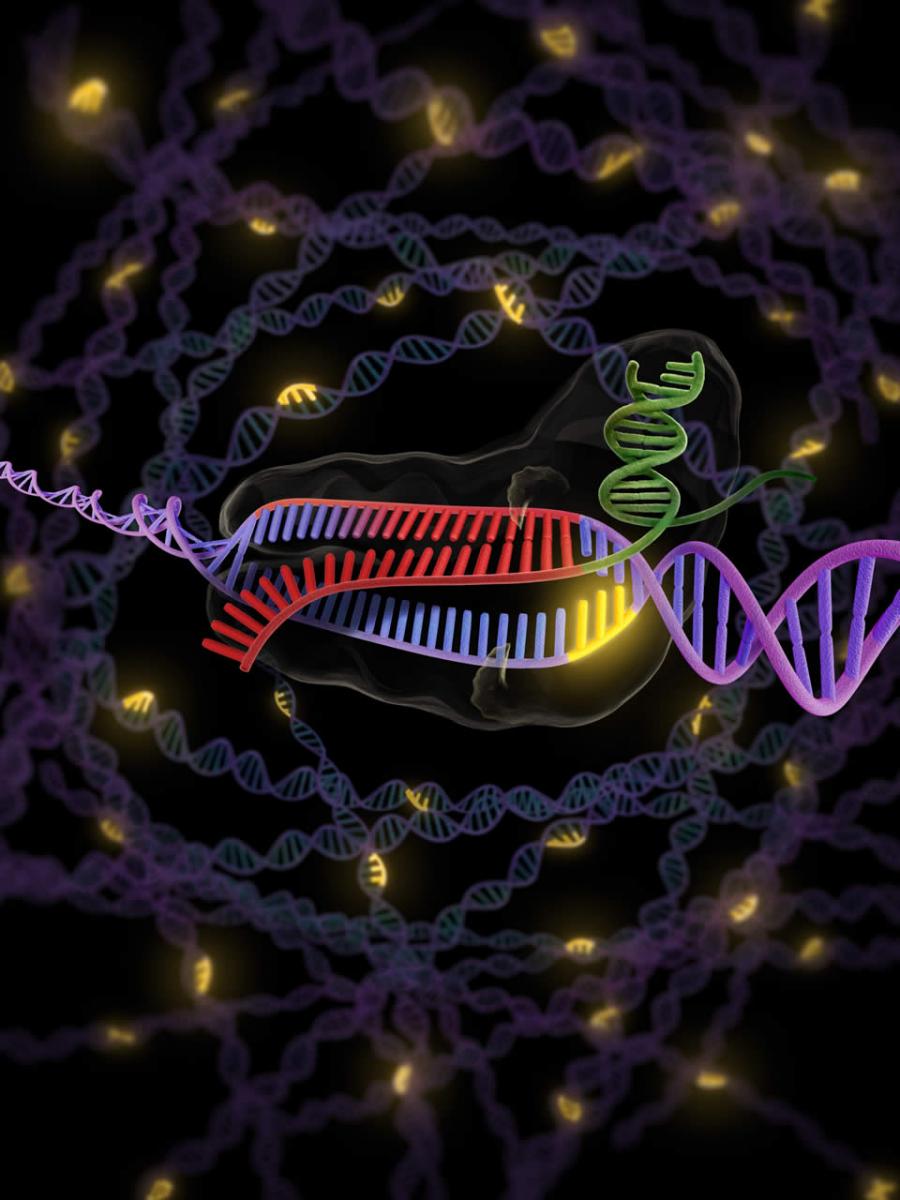 Many bacteria are equipped with an immune system that seeks out and chops up invaders' DNA. This type of defense mechanism recognizes and targets short regions of foreign DNA lurking within the millions of letters of a bacterium's own genetic code. New research from Howard Hughes Medical Institute (HHMI) scientists reveals how this foreign-DNA-destroying system, known as CRISPR, efficiently locates its DNA targets within a bacterial genome.

The research, led by HHMI investigator Jennifer Doudna at the University of California, Berkeley, and HHMI early career scientist Eric Greene at Columbia University, focused on a protein called Cas9. In 2012, Doudna's lab and the lab of Emmanuelle Charpentier at Umea University showed that Cas9 is a dual-RNA guided DNA endonuclease responsible for CRISPR-based immunity in certain bacteria. The Cas9 protein relies on a short RNA guide sequence—made up of 20 letters of genetic code—to find foreign DNA inside a bacterial cell.

Doudna, Greene, and their colleagues have discovered that the CRISPR complex focuses its search by first scanning the genome for a very short signal motif. Once it finds that motif, Cas9 devotes the time and energy to searching nearby DNA for a sequence that matches its RNA guide.

The finding, which is described in the January 29, 2014, online issue of the journal Nature, helps explain how the CRISPR complex accomplishes its “needle-in-the-haystack” search for foreign DNA quickly enough to fend off viral invaders, while avoiding cleaving a bacterium's own DNA. “Rather than spending a lot of time searching through every base pair of DNA, the enzyme really only spends time at sites that have this motif,” Doudna says.

Rather than spending a lot of time searching through every base pair of DNA, the enzyme really only spends time at sites that have this motif.

Doudna, whose team has adapted the bacterial CRISPR system into a targeted DNA-snipping tool that researchers are now using to edit genomes in their laboratories, says the discovery also lessens concerns about CRISPR potentially cleaving DNA in unwanted locations in research applications.

After demonstrating that short sequences of RNA guide Cas9 to attack viral DNA, Doudna and her colleagues remained curious about how the complex found those targets. To scan the genetic code, the complex would have to pry apart the two intertwined strands of the DNA double helix to reveal the nucleotide letters inside—a process that would demand too much time and energy if it were carried out indiscriminately. What the team needed, they decided, was to watch the complex in action.

Greene's lab had pioneered a technique that lets researchers watch individual proteins interact with single molecules of DNA. “Using this technology, we can see how different proteins bind to DNA. We can tell how things are working just by looking at them,” he says. So Samuel Sternberg, a graduate student in Doudna's lab, traveled to Columbia to set up single-molecule experiments with Sy Redding, a graduate student in Greene's lab. The researchers immobilized DNA on a glass slide, stretching out individual strands and arranging them side-by-side into what Greene calls “DNA Curtains.” They then allowed a Cas9 enzyme, equipped with its RNA guide, to interact with the DNA. Each Cas9 protein carried a fluorescent tag, so the team could follow its movements and examine which segments of DNA attracted the most attention from the CRISPR complex.

What they saw, Greene says, is that the CRISPR complex bounced against the DNA in what at first appeared to be a random pattern while searching for its proper target site—most of the time falling right back off before eventually finding the correct site. When they investigated the transient interactions in greater detail, they found that Cas9 showed a clear preference for DNA strands with a higher occurrence of a short signal sequence—a pair of Gs embedded somewhere in As, Ts, Gs, and Cs of the genetic code.

The team followed these observations with biochemical experiments, in which they could control the composition of the DNA that the CRISPR complex encountered. When they measured the cleavage of different DNA strands, they found that Cas9 would not cleave strands that lacked the GG signal—even if the DNA contained the target sequence matching the enzyme's RNA guide. “Only DNA sequences that had GG dinucleotides could be recognized at all by Cas9,” Doudna says. After it found a GG motif, Cas9 was selective, cleaving only DNA molecules containing a match for the guide RNA. The GG motif was also essential to trigger the enzyme's DNA-cleaving activity, the scientists found.

The team's experiments indicate that the Cas9 enzyme attaches to DNA wherever it finds a GG motif, then tests the adjacent DNA to determine if its sequence that matches its RNA guide. “The protein looks for this motif first,” says Sternberg. “Only when it finds this motif does it use the time and energy to pry open the DNA and ask whether it matches the RNA.”

“The vast majority of GGs will not be adjacent to a sequence that matches the guide RNA sequence,” Doudna says. But if the enzyme does find a match, it snips the DNA in two.

Redding likens Cas9's target search to a person trying to find a pair of red socks in their bedroom dresser. Opening drawers at random to sift through stacks of pants and shirts and trying to put them on our feet would waste time and effort. “But that's not how we work,” he says. “We just open the sock drawer and pick the pair of socks we want to wear that day.” Cas9 does exactly the same thing, and simplifies its “search problem” by only looking at DNA sites next to a GG motif (a.k.a “the sock drawer”) for the sequence that matches its guide RNA.

Doudna says the findings also have implications for researchers who are using the CRISPR system for genome editing. “One of the concerns for people who are using this as a tool has been whether there are off-target effects, in which sites are inadvertently recognized by Cas9 and perhaps cut or modified in experiments,” she notes. The finding that the Cas9 enzyme ignores target sequences that are not adjacent to the GG signal reduces this concern, she says. “Even if you have a perfect match to the guide RNA, if it's not adjacent to the GG dinucleotide, that will not be seen by Cas9.”