Scientists Develop New Picture of How Bacteria Fend Off Invaders

Researchers have new details of how an enzyme helps bacteria slice up foreign genetic material. 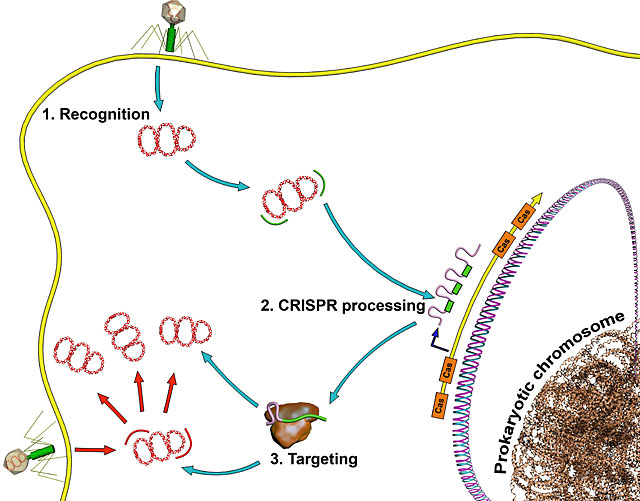 Humans often worry about being infected by bacteria, but bacteria have to worry about infections of their own. As a result, bacteria long ago developed an adaptive immune system to protect themselves by silencing foreign genes introduced by viruses or other bacteria. Howard Hughes Medical Institute (HHMI) researchers have now published a detailed study of an important element of that system, an enzyme that helps bacteria slice up foreign genetic material.

This gene-silencing immune system was discovered in bacteria only a few years ago, and researchers have been eager to learn more about it, so the new findings are important on a basic science level. But they also point the way towards possible applications, including using this bacterial system as a template for designing versatile tools that silence bad genes involved in human diseases. Humans and other higher organisms have their own gene-silencing system, known as the RNA-interference system, but manipulating that system could interfere with cells’ normal function. Borrowing gene silencing strategies from bacteria could help researchers derive therapies with less risk of side effects.

The CRISPR system evolves rapidly as its threat environment changes, and may disappear altogether from bacterial genomes in a protected laboratory environment, so that could explain why it was overlooked.

The new findings, which are published in the September 10, 2010, issue of the journal Science, come from the laboratory of HHMI investigator Jennifer A. Doudna, a professor of biochemistry and molecular biology at the University of California-Berkeley. The lead co-authors on the study are graduate student Rachel Haurwitz and postdoctoral researcher Martin Jinek, both members of Doudna’s research group.

Researchers originally stumbled across this gene-silencing system in the late 1980s after noticing distinctive sections of repeating DNA within the genomes of bacteria and primitive single-celled organisms known as archaea. The repetitive sequences—formally called “clustered regularly interspaced short palindromic repeat” (CRISPR) sequences—had no known function. Eventually, researchers found that they contained genetic snippets from viruses or other bacteria that had attacked the host—or, more likely, its ancestors—in the past. Only in 2007 did scientists establish that these CRISPR sequences coded for an adaptive, inherited immune system.

“It’s a rare thing in biology to discover a major new pathway in organisms we’ve been studying for so long,” says Doudna. “But the CRISPR system evolves rapidly as its threat environment changes, and may disappear altogether from bacterial genomes in a protected laboratory environment, so that could explain why it was overlooked.”

Scientists now understand that after one of these CRISPR segments is transcribed into a stretch of RNA, it is somehow chopped up into smaller, functional RNA segments. Each of these segments contains one of the snippets of a past invader’s genetic material, and can stick to the corresponding genetic element from a new invader—blocking its activity and apparently marking it for destruction.

An essential but still somewhat mysterious step in this process is how the initial piece of CRISPR-derived RNA is chopped up into its individual invader-specific segments. In the present study, Doudna and her students set out to identify and understand the enzyme responsible for this slicing and dicing in Pseudomonas aeruginosa—a common bacterium and one that can cause life-threatening infections.

CRISPR segments in P. aeruginosa are flanked by several helper genes. Among these, Doudna’s team found one that codes for an enzyme, Csy4, which cleaves CRISPR RNA from P. aeruginosa.

CRISPR RNA transcripts in P. aeruginosa have a distinctive structure, in which mushroom shaped loops of RNA surround “spacer” segments containing the genetic material from a past invader. Doudna’s team found that as the Csy4 enzyme interacts with different fragments of these transcripts, it grips and cleaves at the base of each loop.

After crystallizing Csy4 in combination with a small fragment of CRISPR RNA, the team examined the atomic-level structure of this complex to determine the molecular details of how Csy4 binds and cleaves. The researchers then systematically made small mutations to Csy4, as well as to the CRISPR RNA, to see how these changes affected Csy4’s function.

Other labs have reported the structures of analogous CRISPR-dicing enzymes from different bacterial species, but this is the first time researchers have obtained molecular details of the complex that such an enzyme makes with CRISPR RNA.

“We’d now like to know more about what happens after Csy4 cleaves CRISPR RNA into these functional segments,” says Doudna. It appears that Csy4 doesn’t let go, but remains bound to one of the segments it has cut free. Work in other bacteria suggests that the remaining CRISPR-linked helper genes code for a large, invader-gene-disposal complex. “Our evidence so far hints that Csy4 plays a role in bringing its RNA segment into this larger complex,” Doudna says.

In any event, she adds, knowing the details of how Csy4 binds to CRISPR RNA allows researchers to think seriously about engineering such enzymes to recognize any target RNA of interest, for therapeutic purposes.

The CRISPR gene-silencing system works with molecules that have no natural function in humans, and thus would seem less likely to cause unwanted side effects than therapies that rely on gene-silencing mechanisms that operate in healthy human cells. “It would be exciting to find a new mechanism of gene silencing that doesn’t involve our built-in RNA-interference machinery,” says Doudna.