HHMI researchers have deciphered a key part of the regulatory code that governs how motor neurons in the spinal cord connect to specific target muscles in the limbs.

Howard Hughes Medical Institute (HHMI) researchers have deciphered a key part of the regulatory code that governs how motor neurons in the spinal cord connect to specific target muscles in the limbs.

The researchers said that understanding this code may help guide progress in restoring motor neuron function in people whose spinal cords have been damaged by trauma or disease. The studies suggest that the code—which involves members of the family of transcription factors encoded by the Hox genes—could also govern the establishment of other spinal cord circuits. This circuitry includes interneurons that control motor neuron firing patterns and sensory neurons that transmit feedback information on muscle action.

While these are basic studies on circuitry in the central nervous system, I think they offer the potential of understanding circuits in sufficient detail to guide approaches to therapy, in a clinical context.

The research team, which was led by HHMI investigator Thomas M. Jessell, published its findings in the November 4, 2005, issue of the journal Cell . Jessell collaborated on the studies with HHMI research associate Jeremy S. Dasen, Bonnie C. Tice and Susan Brenner-Morton, all of whom are at Columbia University. The work was also funded by grants from the National Institute of Neurological Disorders and Stroke and Project ALS.

According to Jessell, members of the Hox gene family had been known to regulate aspects of brain development, but “few people had paid attention to the fact that these genes are also expressed in the spinal cord.” Earlier work performed by Dasen and Jessell, in collaboration with Jeh-Ping Liu, who is now at the University of Virginia, established that certain Hox proteins control the differentiation of motor neurons into columns in the spinal cord. These columns, which are arrayed along the anterior-posterior length of the spinal cord, form in the initial phases of motor neuron organization. That organization determines whether motor neurons grow to the limbs or to other targets.

Creation of antibodies that react with each of the 21 Hox proteins expressed by spinal cord motor neurons was an important technical advance that enabled the researchers to crack this code. Using these antibodies, Dasen and colleagues pinpointed the pattern of expression of each protein within the set of motor neurons that project to limb muscles. “Once we had these reagents, we were able to obtain the high resolution maps of Hox expression that were necessary to address more complex aspects of Hox function in motor neuron diversification,” said Jessell.

To give an idea of the extent of complexity, Jessell explained, “there are few motor columns, yet within each of the columns that projects to the limb there are at least fifty different subtypes of motor neurons, termed motor pools. Our initial work hinted that the Hox code that defines column identity might also be involved in establishing the extreme diversity of motor pools.” 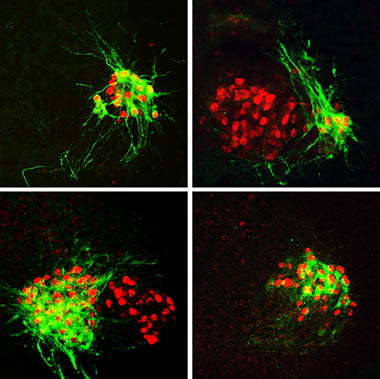 Using antibodies to the Hox proteins that define spinal motor neurons, Dasen and colleagues mapped the timing and location of each of the Hox proteins expressed by motor neurons that project to the wing in chick embryos. “It became clear that these proteins weren't randomly expressed, but were expressed in highly precise patterns that corresponded to anatomically-defined motor neuron pools,” said Jessell.

Dasen's functional analysis revealed a Hox coding hierarchy. “He found that the Hox proteins involved in pool identity are different from those involved in column identity,” said Jessell. “So from these data, the idea began to emerge that within the chromosomal Hox clusters, some Hox proteins are dedicated to broad aspects of motor neuron differentiation, and others to finer aspects of diversification. Ultimately, what crystallized from these experiments was a code—an organized relationship between Hox proteins, their chromosomal organization, and the differentiation and connectivity of motor neuron pools,” he said. 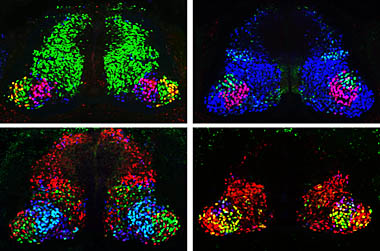 Marc Tessier-Lavigne, an expert in the study of how the brain is wired and a senior vice president for research at Genentech, said the study represents a technical tour-de-force and provides a key conceptual advance for the field. The discovery of this molecular code shows how the nervous system can generate the huge diversity of neurons necessary for a complex task like locomotion. And, he says, the fact that the code is based on Hox genes, which regulate anterior-posterior pattern, comes as a surprise. The discovery that Hox genes are also used to subdivide motor pools at particular anterior-posterior levels was unexpected. Its a wonderful solution to the problem of specifying this very large number of motor pools.

The studies also raise the possibility that the combinatorial code contains additional information, beyond the regulation of motor neuron wiring. “This is still conjecture, but the sheer number of Hox proteins, and their capacity to direct neuronal differentiation, suggests that they may also impart identity to the interneurons that enable them to connect selectively with motor neurons. And, aspects of the code could also give identity to sensory neurons, enabling their connections with motor neurons,” said Jessell. Deciphering the entire Hox code could provide crucial insights into the organization of the complex circuitry that the spinal cord uses to control muscle action.

According to Tessier-Lavigne, not only is the cracking of the motor neuron code profoundly enabling for fundamental neurobiology research, but it may have significant clinical implications, as well. Understanding what regulates the formation of these circuits provides essential information for attempts to restore their integrity and function following spinal cord injury or neurodegenerative disease, he said.

Jessell, too, is optimistic that there will eventually be clinical value in deciphering the Hox code. “In developing ways to recover from spinal cord injuries, much attention has focused on getting the axons of cortical neurons to grow past the lesion site and innervate target neurons in distant parts of the spinal cord,” he said. “Now, it may be that the spinal cord circuit is still intact—and there is some evidence to believe this—so all you need to do is get regenerating axons to grow past the site of the lesion.

“Or, it could be that injury causes subtle alterations in the wiring of spinal circuits, and these alterations may constrain the capacity for full recovery of motor function. So, the more that is understood about the basic workings of this locomotor circuit, the better chance there is of developing regenerative strategies to restore motor function in a precise way,” Jessell continued. “And in motor neuron degenerative diseases, it may not be enough to make new motor neurons; they have to connect to the right muscle target in order to restore motor function. Understanding how Hox proteins control circuit formation in the spinal cord should provide an important basic framework for approaching these clinical issues.

“Thus, while these are basic studies on circuitry in the central nervous system, I think they offer the potential of understanding circuits in sufficient detail to guide approaches to therapy, in a clinical context,” said Jessell.