New lab heads Barry Dickson and Nikolaus Grigorieff will move to Janelia in 2013. 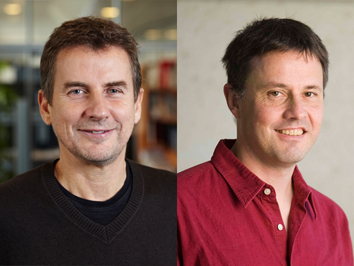 The Howard Hughes Medical Institute’s Janelia Research Campus will expand its scientific community when new lab heads Barry Dickson and Nikolaus Grigorieff set up their labs in 2013. Dickson, currently at the Institute for Molecular Pathology in Vienna, Austria, and Grigorieff, currently an HHMI investigator at Brandeis University, will bring additional expertise in neuroscience and imaging to the Virginia campus.

Dickson, a neuroscientist, wants to understand how circuits in the brain guide innate behavior. His studies of fruit fly mating behavior are helping to uncover how the brain processes information and makes decisions. Grigorieff develops and uses advanced microscopy techniques to visualize the three-dimensional structure of large macromolecular complexes, with the goal of learning how their components function and interact with one another.

Janelia lab heads lead small, interdisciplinary teams that work together to address challenging scientific problems. At Janelia, Dickson and Grigorieff plan to advance the research programs they have established in their current labs, but both note that they also anticipate exploring unforeseen directions inspired by their new colleagues and environment. Both scientists say the resources and scientific expertise at Janelia will enable them to pursue their research goals in creative and ambitious ways. Just as important, they add, is the opportunity to be immersed in a diverse scientific community that values the open exchange of ideas.

As a graduate student at the University of Zurich, Dickson studied the visual system development in the fruit fly in the lab of Ernst Hafen. Later, as a postdoctoral researcher in Corey Goodman’s laboratory at the University of California, Berkeley, he studied the molecular and cellular mechanisms of axon pathfinding, work that he continued in his own lab, first at the University of Zurich and then at the Institute for Molecular Pathology (IMP), where he has been since 1998. In addition to heading his own research group as a senior scientist, Dickson served as Scientific Director for the IMP from 2006 through 2012.

Today Dickson’s lab unravels the neural circuitry that underlies mating behavior. In fruit flies, mating involves critical decisions for both males and females based on sensory input, past experiences, and sexual maturity. Gender-specific behavior is largely controlled by a gene called fruitless, which is processed differently in males and females to produce gender-specific forms of the fruitless protein. In 2005, Dickson’s lab showed that females carrying the male form of the fruitless protein behaved like females, courting other female flies. Today, his lab is using genetic tools to investigate the roles of the approximately 2000 of neurons that express the fruitless protein in male flies. They are also examining the pathways in the female brain that integrate information and influence mating decisions.

Dickson says he has been a frequent participant at Janelia’s scientific conferences, making regular visits to the Virginia campus from the time it opened in 2006. “I was blown away by the science, the resources, and collegiality,” he says.

Though he contemplated a move to the campus during its early days, he chose instead to stay on at the IMP to take on the director position. Now he's looking forward to making the move, together with a few members of his current lab, in October. “It’s the place to be,” he says.

“Initially we’ll continue with what we’ve been working on. But one of the reasons we’re moving is that in the long run, we’ll be exposed to new people and new ideas, so I expect we’ll start something new.” His research group, now comprising about 20 members, will shrink to six, in keeping with Janelia’s model. With a smaller team to manage and free of the administrative duties associated with his position at the IMP, Dickson says he’s looking forward to more direct involvement with the science. He’ll be able to spend more time planning experiments, analyzing and thinking about data, and talking with team members and colleagues.

Like Dickson, Grigorieff says he is looking forward to immersing himself in research in an environment free of administrative distractions when he moves his lab from Brandeis to Janelia in August. Grigorieff, who has been an HHMI investigator since 2000, uses high-resolution electron microscopy to reveal the structures of viruses and the biological machines that operate inside cells, writing software to transform imaging data into vivid, three-dimensional structures.

Grigorieff earned a Ph.D. in physics at the University of Bristol in the United Kingdom, then went to the Medical Research Council’s Laboratory of Molecular Biology as a postdoctoral researcher, where he developed techniques and algorithms to improve the resolution of electron microscopy images, work that he continued when he set up a lab of his own at Brandeis in 1999.

Currently, his lab is focused on developing high-resolution structures for several biologically important complexes, including the spliceosome—the bulky machine that removes unwanted segments of RNA before it is used as a blueprint for a protein—and amyloid fibrils, peptide or protein aggregates associated with neurodegenerative diseases including Alzheimer’s and Creutzfeldt-Jakob disease.

Over the past few years, Grigorieff helped establish a cryo-EM facility at Janelia, which opened in 2012 and houses one of the most complex high-resolution imaging systems in the world. When he moves his own lab to Janelia, Grigorieff will use the facility to continue some of his ongoing work and to begin investigating new molecules. “My main focus over the years has been to develop technology to push the resolution of cryo-EM to higher and higher levels. That focus will remain,” he says. “But I’ve never done this in isolation, but always together with interesting biological problems that drive the technologies. Some of those problems will probably change.” For example, he says, ion channels, which are essential to neurons’ ability to transmit signals, are a subject of inherent interest to the Janelia community.

But he’s leaving his plans open-ended, and relishing the prospect of new pursuits growing out of informal conversations with other Janelia scientists. “You can have conversations there about new ideas with open-minded people who are pondering big problems,” he says. “That’s something that’s hard to find these days—in other places, people don’t have much time to talk to their colleagues. But at Janelia, that culture has been there since the beginning and is being fostered by design. I want to contribute to that.”

When Janelia opened in 2006, Grigorieff considered moving his lab there, but ultimately chose to remain at Brandeis. Now, he says, the time is right to make the move. Janelia has in place the resources and community that will allow him to address the research problems that interest him most. Lab head Tamir Gonen, another cryo-EM specialist who arrived at Janelia in 2011, has helped launch a structural biology program on the campus, and Grigorieff has already spent time at the campus using its Titan Krios, a microscope made by FEI that he says is one of the most advanced cryo-EM instruments in the world.

In addition, Grigorieff says, he sees the potential for the next ten years of his career to be productive in a way that they won’t always be. “I think there’s a difference between sitting down yourself and figuring out problems, and telling others what they should work on. I still have the creativity and the energy to do a few things with my own hands,” he says. “In ten years I might not be able to do this. I want to take advantage of this opportunity while I can.”