Vale, an HHMI investigator at the University of California, San Francisco, will serve as the second executive director of the Ashburn, Virginia-based biomedical research center. 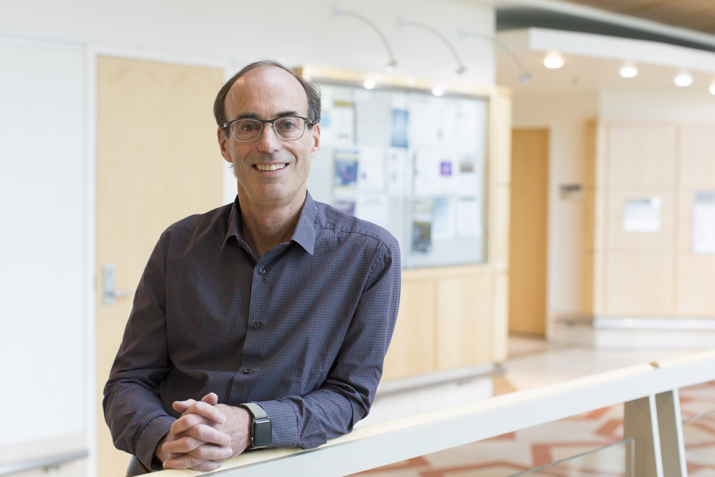 Cell biologist Ron Vale, a pioneer in the field of molecular motors – the tiny, biological machines that can ferry cargo across cells – has been elected the executive director of the Howard Hughes Medical Institute’s (HHMI) Janelia Research Campus and an HHMI vice president. His appointment will begin in early 2020.

An HHMI investigator at the University of California, San Francisco (UCSF), Vale will succeed geneticist Gerry Rubin, who has served as Janelia’s executive director since its founding in 2003. Vale is poised to lead Janelia at a defining moment in its history: the research center, internationally recognized for advanced microscopy, cutting-edge tools, and breakthroughs in brain science, recently announced an open competition to decide an additional research area.

“Ron is not only an outstanding scientist but also a passionate advocate for science and scientists,” says Erin O’Shea, president of HHMI. “He is a terrific choice for Janelia today, and we’re thrilled to welcome him.”

Vale’s scientific interests cut across a spectrum of biology, from immune signaling and RNA biology to the molecular motors that power the movement of cell membranes and chromosomes. In 1984, after studying the nerve cells of squid, he and his colleagues discovered a new kind of motor protein, which they named kinesin. Over the subsequent 15 years at UCSF, Vale’s lab deciphered how this motor walks stepwise along cellular tracks. In the past decade, Vale’s team made several breakthroughs with a different motor protein, dynein, leading to a mechanistic understanding of how this motor moves along tracks in the opposite direction to kinesin.

Vale’s work on motor proteins has earned him the 2012 Albert Lasker Basic Medical Research Award and the 2017 Shaw Prize in Life Sciences and Medicine, among other honors. “Ron is a superb, highly acclaimed scientist who commands respect,” Rubin says. “He has a track record of interest in alternative models for conducting research and is fully committed to advancing Janelia’s success – I look forward to what comes next.” Rubin will remain at Janelia as a senior group leader.

An HHMI investigator since 1995, Vale, age 60, has served on the faculty of UCSF since 1987. At UCSF, he has acted as the director of the cell biology program and the chair of the department of cellular and molecular pharmacology. He received a bachelor’s degree in biology and chemistry from the University of California, Santa Barbara, and a PhD in neuroscience from Stanford University.

For more than a decade, Vale has been a champion of democratic access to high-quality science. He founded three non-profit organizations devoted to advancing science and science education: iBiology, which produces and distributes free, on-demand biology lectures by high-profile leaders in biological research; ASAPbio, a scientist-driven initiative to improve publication practices in the life sciences; and IndiaBioscience, which promotes the networking of Indian biologists and mentoring of young scientists. A supporter of open science, Vale’s lab also developed MicroManager, open source software for microscopy.

Now, Vale is looking forward to beginning a new chapter at Janelia. “Janelia is one of the most interesting and unique research institutes in the world – its backbone is big-vision science,” he says. “People at Janelia are highly collaborative, and the interplay between scientists and technology developers is very powerful – it’s a wonderful environment for doing science.”

In about a year, Vale will open a laboratory on Janelia’s campus in Ashburn, Virginia. He’s open to all avenues of research. “I’m curious about every area of biology, so Janelia is a grand adventure for me scientifically,” he says. “But it’s not just about what I want to do – it’s about the young scientists who come to Janelia and allowing them to realize their scientific dreams.”

The Howard Hughes Medical Institute’s Janelia Research Campus in Ashburn, Virginia, is an innovative research center that cracks open scientific fields by breaking through technical and intellectual barriers. Our integrated teams of lab scientists and tool-builders pursue a small number of scientific questions with potential for transformative impact. Janelia scientists have made a number of biological advances, including foundational analysis of the complex neural connections and computations that underlie behavior.