In the overwhelmingly left-handed world of amino acids, the right-handed versions of a few such molecules act as signals that spur bacteria to adapt to changing conditions. 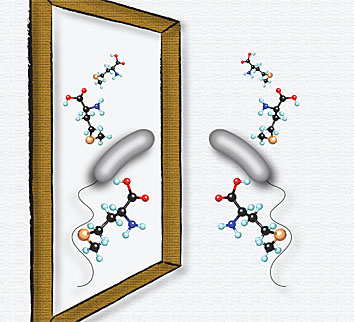 The insides of cells are swimming with amino acids, essential chemical building blocks of life. But flip one of these molecules around, so that it is a mirror image of its former self, and the cell will take notice. New research from Howard Hughes Medical Institute (HHMI) scientists indicates that in the overwhelmingly “left-handed” world of amino acids, the “right-handed” versions of a few of these molecules act as signals that can spur bacteria to adapt to changing environmental conditions.

Amino acids are best known as the building blocks of proteins, which themselves form the biological machinery of all cells. The 20 amino acids that make up proteins each consist of four clusters of atoms branching out from a central carbon atom, like fingers around a palm. These chemical side chains can be arranged clockwise or counterclockwise—orientations chemists call “D” and “L.” Just like left and right hands, a D-amino acid has precisely the same “fingers” as its L counterpart, but is a mirror image.

This difference is biologically crucial, since amino acids interact with molecules that are very sensitive and can recognize only one of the two orientations. In the biological world, this is almost always the L form. No one knows for sure why D-amino acids are scarce, but one possibility is that a chance occurrence established this orientation bias billions of years ago, in the common ancestor of modern life.

HHMI investigator Matthew Waldor and his colleagues found that certain bacteria convert specific amino acids to their D forms when it is time to slow growth. When these D-amino acids are released into the environment, they change the way nearby bacteria construct their cell walls. Waldor and his colleagues published their findings in the September 18, 2009, issue of the journal Science.

Waldor’s lab at Brigham and Women’s Hospital studies microorganisms that cause disease in the human gastrointestinal tract. Nearly all such bacteria, including those that cause cholera, Vibrio cholerae, are shaped like bent rods. Curious whether this common shape has anything to do with the microbes’ virulence, Waldor’s team had been looking for gene mutations that would cause these bacteria to assume a different shape. Eventually, they succeeded when they found that bacteria carrying a mutation in a gene called mrcA had both rod-shaped and spherical forms.

Vibrio cholerae begins life with a period of exponential growth, then stops growing and becomes stationary before dividing again. The mutant cholera strain the group had stumbled upon looked like normal, bent-rod cholera during its exponential growth phase, but became spherical in the stationary phase. Waldor and his colleagues were surprised to discover that the bacteria appeared to be releasing some substance into their own environment that triggered this shape change.

Bacteria are protected by a cell wall made of a strong, elastic polymer called peptidoglycan which determines a bacterium’s shape. Inserting additional polymer elements allows a cell to expand, and conversely, when a cell stops growing, it can slow peptidoglycan synthesis to conserve resources. According to Waldor, researchers had long been puzzled as to how peptidoglycan production and assembly were regulated, because these processes take place in a space external to the inner membranes, away from the main compartment of the cell—the cytoplasm—where nearly all regulatory factors reside.

When the team realized their morphing cholera mutant might hold clues to how peptidoglycan synthesis is regulated, they refocused their research and set out to identify the factor triggering the shape change. They began by taking a closer look at the type of molecules floating in the cells’ culture medium, and discovered the presence of some unusual amino acids: the D forms of the amino acids methionine and leucine.

They found that cholera bacteria use an enzyme called a racemase to create large quantities of D-methionine and D-leucine from their L counterparts. The racemase inhabits the cell’s periplasmic space between the inner and outer membranes, and begins synthesizing D-amino acids when the cell stops growing, the team found. The D-amino acids then alert the cell’s wall-building proteins to slow their production of peptidoglycan, as demand has waned.

The team constructed a mutant that does not produce the racemase, and therefore could not manufacture the D-amino acids. So when they stopped growing, their walls continued to expand. They contained more—but weaker—peptidoglycan chains that left the cells 20 times more likely to rupture than normal rod-shaped cells. Waldor says this indicates that D-amino acids serve as a check on peptidoglycan production. “Our work suggests this is a new fundamental [regulatory] mechanism,” he says.

The importance of D-amino acids doesn’t end there, adds Hubert Lam, a co-author and postdoctoral researcher in Waldor’s lab. After examining the cholera bacteria, the team looked for the actions of D-amino acids in other species. They turned to Bacillus subtilis, a commonly studied bacteria that is far from V. cholerae on the evolutionary tree. They found evidence that the presence of D-amino acids reduced peptidoglycan production in B. subtilis, as well. They speculate that D-amino acids may act as a signaling molecule between individual B. subtilis cells in a population.

“D-amino acids appear to be produced when bacteria are with other bacteria,” says Lam. Adding the D-amino acids to cultures of growing B. subtilis appeared to stop growth of their cell walls, suggesting that the molecules may serve as a sort of brake for population growth. As a population expands, bacteria may release D-amino acids essentially to let one another know they are there, and the population as a whole should slow growth to avoid consuming limited resources too quickly.

The team says there is still much to be learned. While it’s clear that D-amino acids affect the structure of the cell wall, the molecular mechanisms involved have yet to be worked out. In addition, there is a lot to be learned about amino acids’ potential role in signaling between individuals—or even between different species. According to Lam, “the sheer amount of D-amino acids being produced is very unexpected.” Producing so much of anything takes a lot of energy, and so evolutionarily, it must be important, he says.