HHMI researchers have discovered that the pool of inactive HIV viruses that lingers silently in a patient’s body is larger than expected. The viruses continue to be a threat because they retain the ability to become active even after treatment with the best HIV drugs. 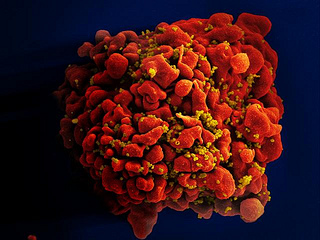 In the fight to cure human immunodeficiency virus (HIV), researchers have been dealt a blow. A new study by Howard Hughes Medical Institute (HHMI) scientists discovered that the pool of inactive HIV viruses that lingers silently in a patient’s body is larger than expected. The new findings show that the virus reservoir may be up to 60 times larger than previous estimates. These viruses continue to be a threat because they retain the ability to become active even after treatment with the best HIV drugs.

The new results, published October 24, 2013, in the journal Cell, suggest that efforts to eradicate HIV may be ineffective over the long-term if therapies fail to target the inactive viruses, which are called proviruses. “The findings suggest that there are a lot more of these proviruses that we have to worry about than we thought,” says Robert F. Siliciano, an HHMI investigator at The Johns Hopkins University who led the new study. “It doesn’t mean that it’s hopeless, but it does mean we need to focus on getting an even clearer idea of the scope of the problem.”

In patients with HIV infection, the virus targets the immune system’s T cells, where its genes are integrated into the cell’s human genes. The viral genes contain the instructions to turn the T cell into a virus-producing factory, if they’re turned on. But in some cells, the virus remains latent—present in the cell but not actively replicating to produce new viruses. While antiretroviral drugs can target active forms of the virus, researchers don’t yet know how to eliminate the inactive viruses. And until now, they didn’t even have an accurate idea of how large this reservoir of inactive proviruses was, and how many of the viruses retained the ability to become active again in the future.

“For people that are working on HIV, figuring out the size of the reservoir has been a really critical issue,” says Siliciano. “The field has struggled with what you even measure in people who are participating in eradication studies. How do you know how much virus is left?”

In the past, to gauge the size of the reservoir, researchers have used one of two approaches: In one technique, they forced all T cells to be activated, which was thought to turn on all inactive viruses—but that had never been confirmed. With another method, they could count how many viral genomes were present, but the approach was thought to count copies with mutations that made them unable to function, therefore posing no clinical threat.

Ya-Chi Ho, an HHMI international student research fellow in Siliciano’s lab, didn’t think that either test was giving a full picture of the inactive virus reservoir. “In the case of both these assays, it was unclear whether what was being measured was the entire reservoir,” says Ho.

Ho, Siliciano, and their colleagues next developed a technique to study not only the size, but also the composition of the viral reservoir. They first stimulated T cells to activate them, and focused on non-induced proviruses— those that remained inactive, or latent, in response to this activation signal. Then, the team studied the genomes of the non-induced proviruses. While 88 percent contained obvious defects that made the virus permanently unable to replicate, 12 percent contained fully intact viral genomes with no glaring mutations. Next, they synthesized new viral genomes matching those from the intact non-induced proviruses. They expected that small mutations might prevent these viruses from functioning.

“To our surprise, the non-induced proviruses that we judged to be intact based on their genetic sequence all replicated beautifully,” says Siliciano. This suggests that the proviruses could be activated in the future. Indeed, when the scientists performed a second round of T-cell activation on the virus-containing cells that had remained inactive after the first round, some of the viruses became active.

When they calculated the new size of the viral reservoir, based on the finding that 12 percent of non-induced proviruses retained the ability to reactive, Siliciano and Ho found that the reservoir could be as much as 60 times larger than previous estimates. “This is a huge increase in the barrier to curing this disease.” Even if a patient is successfully treated with antiretroviral drugs that stop all active HIV replication, the silent viruses could activate to cause disease at any point after antiretroviral therapy is stopped. Drugs targeting the inactive viruses are required to lead to a complete cure, or remission, of HIV, Siliciano says.

The study doesn’t answer everything about the reservoir. “We propose that the reactivation of HIV is somehow stochastic, or random,” Ho says. “But we don’t understand what is required to turn the viruses back on.” That’s next on the researchers’ list of goals.

For those already developing drugs that aim to activate T cells in order to turn all copies of the HIV virus on, the news is disheartening: T cell activation doesn’t turn all viruses back on. But better understanding the viral reservoir, Siliciano and Ho say, is what will be needed to find the next generation of HIV-fighting drugs.