In a tour-de-force of evolutionary sleuthing, researchers have traced a yellow-to-black color change in African fruit flies to five single-letter genetic mutations. 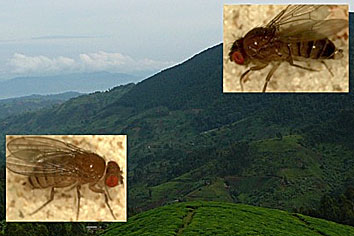 In the December 17, 2009, issue of the journal Science, Carroll reports that the mutations occur in a zone of the fly’s genome once considered “junk DNA.” That is, the mutations do not appear within the code of the color-producing gene itself, but instead just outside of the gene, in a region that helps switch the gene on or off.

Is adaptation a matter of waiting for the perfect mutation to come along and then, bang, it gets you there? Well, no.

Scientists have only recently begun exploring the evolutionary role of these genetic switches, called enhancers. Carroll has been at the forefront of that search—and he is strongly convinced that changes in enhancers drive morphological changes in species. That concept, he says, is well supported by his current fruit-fly study. “For big evolutionary changes in a species, such as changes in body morphology or color, these regulatory regions are where we think the action is,” says Carroll.

Carroll, a professor of molecular biology and genetics at the University of Wisconsin, Madison, has long detailed the evolution of insects and other creatures. In 2007, he came across a paper describing the emergence of mountainside African fruit flies with abdomens striped in black—not the species’ normal yellow coloring. That paper, by John Pool and Charles Aquadro at Cornell University, reported that the black flies appear only at high elevations. The study suggested that dark color provides an adaptive advantage to flies living at higher altitudes. Pool and Aquadro’s study also showed that the ebony gene was responsible for the color change.

Carroll thought the mystery presented the perfect opportunity to dissect the molecular changes behind an evolutionary adaptation. Soon he and two members of his lab, Mark Rebeiz and Victoria Kassner, set to work on a dozen African strains of Drosophila melanogaster with Pool and Aquadro.

Next, the team explored the unknown territory of the ebony regulatory region. Though every gene has one or more regulatory regions, they remain largely mysterious, says Carroll, because there is no known code that explains what they do. “These regions have been a hard frontier to study,” he says. “They are of no set length, you don’t know where they begin or end, and there’s no algorithm that tells you what they do. Everything has to be worked out empirically. It’s a much longer march than studying protein evolution.”

Painstakingly, Carroll, Rebeiz, and Kassner began searching for “enhancers,” small snippets of DNA within the regulatory region that tell the gene to turn on in specific tissues. They discovered enhancers that turned on the ebony gene in various parts of the body—the wing, the head, and the abdomen. Between the light and the dark strains, though, the only differences they found occurred in the enhancers that switched the gene on in the abdomen—where the dark color occurs. “We showed that the activity of the ebony enhancers stays the same everywhere except in the abdomen, which really pinpointed that particular enhancer as vital for the color change,” says Carroll.

The team found 124 differences in the abdomen enhancer region between the light and dark strains of flies. These differences were either single letter DNA changes or other small changes, such as the insertion of two bases of DNA instead of one.

Next, Carroll’s group set about the daunting task of testing each mutation to see if it affected pigmentation. “Mark Rebeiz had to wade into that swamp and find out where the meaningful mutations were,” says Carroll, noting that most changes in DNA are just background mutations that accumulate in organisms, but have no effect.

The scientists chopped up the enhancer region and linked its pieces to various versions of the ebony gene, then tested the genes in flies. After two years of work, the team identified five mutations in the enhancer that, together, produced flies with dark abdomens. Three of the mutations can be found in light flies as well. The last two mutations, however, only occur in the dark flies, and proved critical for triggering the color change.

Carroll says the finding highlights the “standing variations” that are available for natural selection to act on, but are not sufficient to produce evolutionary changes themselves. “Is adaptation a matter of waiting for the perfect mutation to come along and then, bang, it gets you there? Well, no. In the flies, we found there is standing variation that didn’t make them dark until two other nearby mutations popped up. That means there’s this lurking variation that we are going to have to deal with as biologists.”

Finally, the team compared larger chunks of the genomes of the various strains to estimate when these particular mutations arose. Because DNA mutations occur at a more or less steady rate, such a method allows scientists to estimate the last time any two organisms shared a common ancestor. In this case, Carroll found the three mutations in the light colored flies date back about 395,000 generations. (A fruit fly generation is about two weeks.) The two mutations that appear only in the black flies, however, are much newer: about 9,000 generations old.