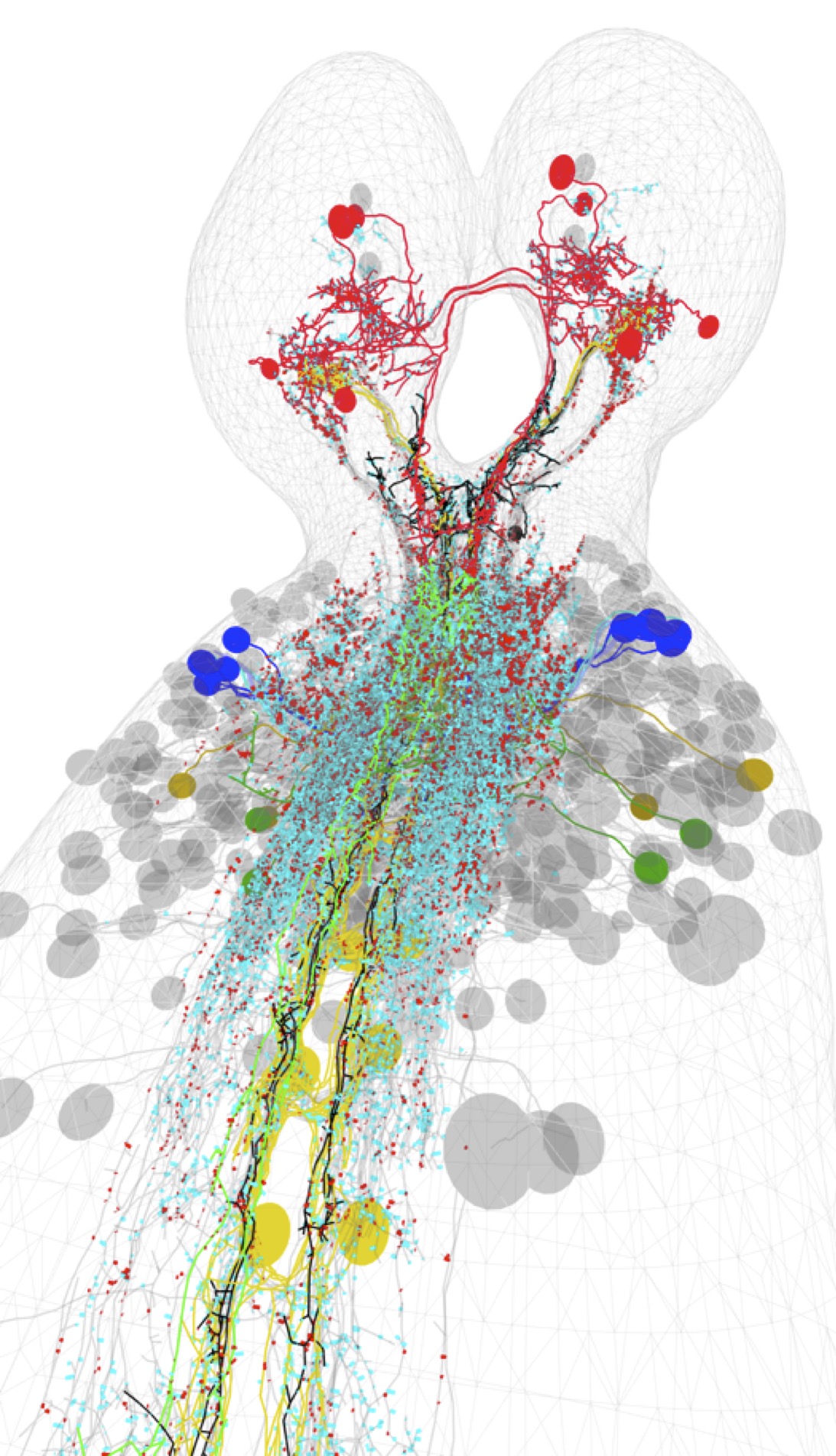 The researchers discovered that the two sensory streams converge at multiple layers of the sensory processing hierarchy. This multilevel convergence likely facilitates discrimination between different kinds of multisensory events. The results were reported online April 20, 2015 in Nature.

“Initially I would have thought this circuit would be simpler, but the complex network could really allow the animal to do a complex computation and react to very particular combinations of cues,” says Janelia group leader Marta Zlatic, a neurobiologist and one of the leaders of the research team.

The fruit fly, Drosophila melanogaster, exhibits an array of distinct escape behaviors, such as turning, digging, fast crawling and rolling – a response to threatening situations, including predator attacks that elicit both mechanosensory, or vibratory, and nociceptive, or painful, sensations.

While mechanosensory and nociceptive neurons had previously been identified, the interneurons onto which the two sensory streams converge, and the command neurons that actually initiate the rolling response, were not known. To map out this circuit, the research teams of Zlatic and Albert Cardona used a three-pronged approach that incorporated iterative rounds of behavioral testing, genetic screens to identify neurons involved in the rolling behavior, and the reconstruction of neural circuits from electron microscopy images of ultrathin sections of larval brain tissue.

First, to trigger rolling, the researchers used speaker-emitted vibrations and the activation of nociceptive neurons that simulated, respectively, the mechanosensory and nociceptive aspects of a predator attack. The effect of combining these two sensory cues was highly synergistic with combinations of cues triggering rolling with much greater probability than either cue alone.

Next, Tomoko Ohyama, the co-first author on the study, performed a screen of hundreds of transgenic mutants – each of which expresses in a distinct subset of neurons – created by group leaders Gerry Rubin, Jim Truman, and Janelia’s Fly Light Project team. Ohyama identified neurons that when stimulated triggered rolling and appeared to innervate the early sensory processing centers in the nerve cord.

In parallel, in a series of electron microscopic images that spanned one segment of the nerve cord, Casey Schneider-Mizell and Cardona reconstructed all the interneurons directly downstream of the mechanosensory and nociceptive sensory axons, using a novel open source computer-assisted circuit mapping method developed by the Cardona lab.  This revealed that two types (out of several hundred) first-order interneurons received multiple synaptic connections from both sensory modalities, whereas others mostly received inputs from a single modality. The roll-evoking neurons identified in Ohyama’s screen turned out to be the ones targeted by both the mechanosensory and nociceptive axons. Physiological studies confirmed these first-order interneurons integrate information from the two modalities, responding more to the combination of cues than to either cue alone.

Finally, Schneider-Mizell mapped out the pathways between the first-order interneurons and the Goro command neurons from a second series of more than 5,000 electron microscopic sections of an entire larval nervous system collected by co-author Rick Fetter and Janelia’s Fly EM Project and registered by Cardona.

In a separate pathway, multisensory and mechanosensory first-order interneurons were connected to command neurons through a set of two interneurons in the nerve cord, bypassing the brain altogether. This pathway was sufficient to activate the command neurons even when the brain was removed. However, the brain pathway likely integrates information across all body segments and modulates command neuron activity based on body-wide sensory information.

“It was pretty surprising that sensory modalities would merge again and again at so many different levels,” says Zlatic. “But in a way it makes sense because that enables the network to tune itself to respond to particular combination of two cues. For example, to a particular combination of noxious and mechanical cues presented by predators. The weights in this network could be tuned either through experience or through evolution -- a fascinating question for the future.”

Zlatic added that the multilevel, multisensory convergence architecture her team observed in the Drosophila larvae may be a general feature in multisensory circuits, enabling complex responses tunable to specific ecological needs. This multisensory circuit in a genetically tractable model system provides a basis for detailed investigation of structural circuit motifs that implement multisensory computations.