New thinking and technological innovation help Janelia researchers piece together a complex map of the neuronal connections that flies use to detect motion. 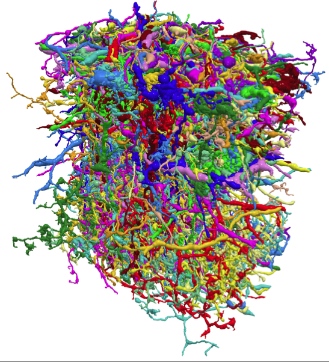 Some optical illusions look like they’re in motion even though the picture is static. A new map of the fly brain also suggests motion—or at least how the fly sees movement. The new research, published in the August 8 issue of Nature, takes advantage of a high-throughput approach that speeds the charting of neuronal connections involved in motion detection.

Neurons snake through the brain, each reaching out and touching many other neurons. In the human brain, 100 billion neurons make on average 1,000 connections each. That intricate network is the secret behind all the amazing things that humans do, like writing War and Peace, painting the Mona Lisa, cooking Chateaubriand, or setting a world record in the 100-meter dash. Scientists know a lot about how individual cells work, but they are just beginning to understand how networks of neurons work together to dictate behavior and thought.

One approach is to map all those neurons and connections. But with the size of the human brain, that’s a daunting task. To attack the problem, researchers are turning to organisms with fewer neurons that can be studied easily in lab, such as the fruit fly.

Fruit flies still accomplish amazing things with their relatively rudimentary nervous systems. Flies are exceptionally good at spotting motion, for instance; part of the secret of their success comes from adjacent light-sensitive cells in the fly eye that process light information at slightly different times. But it was unclear how the underlying circuits made sense of that information.

To tackle the question, Dmitri Chklovskii, a lab head at HHMI’s Janelia Farm Research Campus, and his colleagues worked for five years to produce a map of a part of the fly brain essential for vision. The eye passes information through several brain centers in sequence, including one called the optic medulla.

To plot the circuits in the optic medulla, Chklovskii and colleagues froze a fly brain and then sliced it into very thin sections. Then they took pictures of the part of each section corresponding to the medulla with an electron microscope. Next, they wanted to follow each neuron as it wove from section to section. To do this by hand is arduous, so the researchers sped the process by using a computer procedure that identified the neurons automatically. It wasn’t perfect—sometimes the computer joined two neurons that should be separate, or split a single neuron into two. The researchers used people to check for errors, but the automated method still sped the process.

They then stitched together all of the images into a three-dimensional picture of the optic medulla. They could assign a specific type to each neuron by comparing its shape to the shapes of neurons determined by other methods. And they pinpointed all the connections by searching for telltale structures found at these junctions, called synapses. “We see special features that tell you there’s a functional connection,” says Chklovskii. Overall, they picked out 379 cells and pinpointed 8,637 connections between them.

Next, the group analyzed the three-dimensional model to learn more about the neural circuitry that enabled flies to detect motion. “When the work started, we did not even know which cells output motion signal,” says Chklovskii. But because a type of neuron called T4 came in four varieties corresponding to the four cardinal direction of motion, they decided to look for cells that can relay the message to T4s. Working backwards, they pinpointed two other types of neurons, Mi1 and Tm3, which connect to T4 cells.

In a simple model, Mi1 and Tm3 might each connect a different but adjacent receptor cell in the eye to T4, and T4 could look for a delay between the two inputs as evidence of motion. But Chklovskii found that “a whole group” of Mi1 cells and Tm3 cells connected to a T4 cell. They mapped those groups back to L1 cells, which receive light information from the eye. The L1 cells connected through Mi1 were offset from those connected through Tm3. Moreover, the offset was aligned with the direction in which a given T4 cell is sensitive to movement, which the researchers could discern based on where the T4 cell headed next. An object moving in T4’s preferred direction would, say, first activate the Tm3 side of the circuit and then the Mi1 side of the circuit, Chklovskii posits.

The study defines for the first time the circuit responsible for seeing movement, says Chklovskii. Recently, his guess that T4s respond to motion direction has been confirmed by imaging their activity. The map suggests new experiments, he says. For instance, the spacing of the circuit suggests what the time delays should be between the Mi1 signal and the Tm3 signal.

“Other labs are recording from these cell types and looking for the time delays,” says Chklovskii. An important outcome is showing that Mi1 and Tm3 cells are the major cells that convey information necessary for motion detection to T4s suggesting them as targets for recordings. Mapping the entire region is important because it tells you which types of cells are involved, but also which types are not involved. Sometimes if you look at a static picture in just the right way, things start moving.