HHMI researchers have identified a neural circuit in the subfornical organ that regulates thirst in mice. 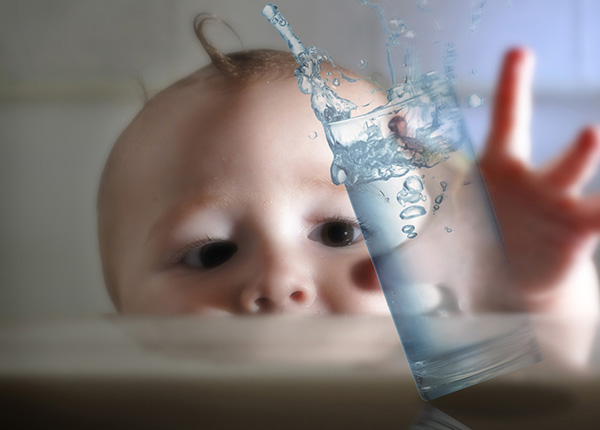 Howard Hughes Medical Institute scientists have identified a circuit in the brains of mice that regulates thirst. When a subset of cells in the circuit is switched on, mice immediately begin drinking water, even if they are fully hydrated. A second set of cells suppresses the urge to drink.

The thirst-regulating circuit is located in a region of the brain called the subfornical organ (SFO). “We view the SFO as a dedicated circuit that has two elements that likely interact with each other to maintain the perfect balance. So you drink when you have to and you don't drink when you don't need to,” says Charles Zuker, an HHMI investigator at Columbia University who led the research. By working in this way, the circuit ensures that animals take in the right amount of fluid to maintain blood pressure, electrolyte balance, and cell volume. This work, led by postdoctoral fellow Yuki Oka was published January 26, 2015, in the journal Nature.

Zuker's lab is primarily interested in the biology of taste. Their studies have identified the receptors for the five basic tastes (sweet, sour, bitter, umami and salt), and shown that the nervous system devotes multiple pathways to sensing and responding to salt. These circuits ensure that salt is appealing to humans at low concentrations, but not at high concentrations. “This is how the taste system regulates salt intake, which is very important for salt homeostasis in the body,” says Oka. “But this is just one side of the coin. Salt intake has to be balanced by water intake.”

The scientists knew a different mechanism must be responsible for controlling an animal's water intake. “There are no concentration changes for water -- water is water,” Oka says. “But when you're thirsty, water is really attractive.” Zuker and Oka set out to determine how the brain regulated the motivation to drink.

They began their search in the brain region known as the SFO, which shows increased activity in dehydrated animals. The SFO is one of the few regions of the brain located outside the blood-brain barrier, meaning it has direct contact with body fluids. “These cells might then have the opportunity to directly sense electrolyte balance in body fluids,” Zuker points out.

Past experiments in which researchers had electrically stimulated various circumventricular organs in the brain of mice, including the SFO, had yielded inconsistent results. Oka wanted to find out if there were specific cells in the SFO that triggered drinking behavior. By analyzing genetic markers, he identified three distinct cell types in the SFO: one set of excitatory cells, one set of inhibitory cells, and a third population of supporting cells known as astrocytes.

To test these predictions, Oka introduced a light-sensitive protein into cells in the SFO, enabling the scientists to selectively activate those cells in the mice. Using blue light from a laser, they then switched on the excitatory cells in the SFO of mice that had already had plenty to drink. The results were dramatic.

“There is an animal that is happily wandering around, with zero interest in drinking. You activate this group of excitatory neurons, and it just beelines to the water spout,” Zuker says. “As long as the light is on, that mouse keeps on drinking.” The animals were uninterested in other fluids, but would avidly drink water for prolonged periods, consuming as much as eight percent of their body weight. For humans, that would amount to about 1.5 gallons of water, Oka points out.

“It's very exciting,” Zuker says. “This circuit informs and directs the mouse into a complex program of actions and behaviors: 'I'm thirsty. I need to identify a source of water. I have to go where the water is. I have to begin to consume that water and I have to continue until this signal is suppressed.'”

The next step involved testing the effect of the inhibitory neurons in the SFO. When Oka switched those cells on in thirsty animals, the mice reduced their water intake by about 80 percent. Activating the inhibitory cells did not affect the animals' interest in food or salt, indicating that the neurons specifically regulate water consumption.

The two groups of cells appear to work together to respond to changing hydration levels and maintain fluid balance, the scientists say. “You can imagine this must be a very tightly controlled feedback loop,” Zuker says. “As fluid is being consumed, the electrolyte balance is changing, and this is being sensed.”

Zuker also points out “the behavior of the mouse is independent of learning, experience, or context,” indicating that the thirst-regulating circuit is hard-wired into the brain. Mingyu Ye, another postdoctoral fellow in Zuker’s lab, also participated in the study. Yuki Oka recently acccepted a position as assistant professor at the California Institute of Technology.