A handful of antibiotic-resistant bacteria can protect an entire colony. 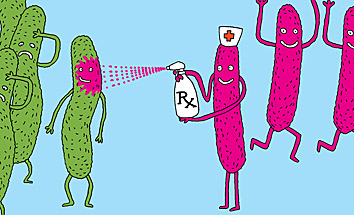 In the war against antibiotics, bacteria aren' selfish. According to a new report from Howard Hughes Medical Institute (HHMI) researchers, a handful of resistant pathogens can protect an entire colony.

Prevailing wisdom held that antibiotic resistance works only on an individual level: a bacterium acquires a genetic mutation that confers protection against a drug, allowing it to survive and reproduce. Eventually, as vulnerable bacteria die, the mutant's stronger progeny repopulate the colony.

But the new study, published September 2, 2010, in the journal Nature, reveals that there are also population-wide changes in the bacterial community at work. Under the onslaught of an antibiotic, resistant Escherichia coli produce—at an energy cost to themselves—a protein that seeps into the communal broth and triggers a slew of protective mechanisms in their non-resistant neighbors.

The chance that we’ll have new and dangerous super bugs emerging is quite high, and I’m worried that our arsenal of antibiotics is dwindling.

In the past few years, the rise of 'super bugs' such as MRSA (methicillin-resistant Staphylococcus aureus) has had hospitals and medical professionals scrambling to fend off a public health disaster. The new findings could help explain why resistance has been so difficult to curb, the researchers say.

HHMI investigator James J. Collins and colleagues at Boston University grew bacteria in a bioreactor—a large, capped glass vessel with many extended arms that allow researchers exquisite control over what the bugs are exposed to. "It kind of looks like a component of a moonshine factory out in the backwoods," Collins says.

Interested in how genetically identical E. coli acquire mutations that confer resistance, the researchers trickled the antibiotic norfloxacin into the bioreactor. As they upped the bugs' exposure, the scientists periodically removed samples of bacteria and measured their 'minimum inhibitory concentration', or MIC—the minimum strength of drug that stops growth of the bug. Larger MICs indicate higher antibiotic resistance.

"That's when we were stopped in our tracks," Collins says. To their total surprise, the researchers discovered that the MIC of individual samples was much lower than the MIC for the population as a whole. Upon further digging, they found that bacterium with high MICs were few and far between—typically making up less than one percent of the population.

The team then analyzed the proteins made by high-MIC bacteria in the presence of norfloxacin, and discovered that an enzyme called tryptophanase was particularly abundant. Tryptophanase breaks down the amino acid tryptophan into smaller components. One of its products is indole, a signaling molecule that E. coli produces under certain stressful conditions.

It turns out that indole offers vulnerable bacteria two kinds of protection against norfloxacin. One is to turn on cellular machines that pump the antibiotic out of the cell, as if expelling a poison. The metabolite also turns on pathways that protect the cell from oxidative stress, a chemical imbalance that leads to the build up toxic molecules called free radicals. A few years ago, Collins's team reported that antibiotics work, in effect, by pummeling bugs with free radicals. "Here we're seeing that indole is dampening that—turning on the sprinklers for the fire resulting from the antibiotics," he says.

By comparing the growth of bacteria, the researchers found that the mutants produce indole at a significant cost to themselves. "They don't grow as well as they could, because they’re producing indole for everybody else," Collins says.

This altruistic behavior—which appears in species throughout the animal kingdom, including humans—presents a well-known paradox for evolutionary biologists: if evolution favors the fittest, why would an individual sacrifice its own fitness for the rest of the group?

Collins's findings bolster the 'kin selection' theory—formalized in the 1960s by the British evolutionary biologist W.D. Hamilton—that says that organisms may behave altruistically toward others that share their genes. So even if altruistic behavior prevents an individual from surviving to pass its own genes on to future generations, others in the population can fulfill that evolutionary role. In this case, the E. coli were from the same population, so by producing indole, the resistant mutants were protecting their own gene pool.

Though the study may make waves in the evolutionary biology field, Collins thinks its implications are most pertinent for public health. The researchers confirmed that the same population-wide protection occurs when bugs are exposed to other kinds of antibiotics. What's more, many types of bacteria produce indole, suggesting that a similar cooperative process may happen in a host of bacterial species.

Future research on antibiotics might well focus on targeting the indole pathway as a means to block bugs' ability to share resistance, Collins says. More broadly, the work highlights the pressing need for investment in new antibiotic development.

"The chance that we’ll have new and dangerous super bugs emerging is quite high, and I’m worried that our arsenal of antibiotics is dwindling," Collins says. "We have time to respond now, but we need a movement backed by political will to expand antibiotic research and development."