A new way of thinking challenges standard notions about what a herpes vaccine should look like. 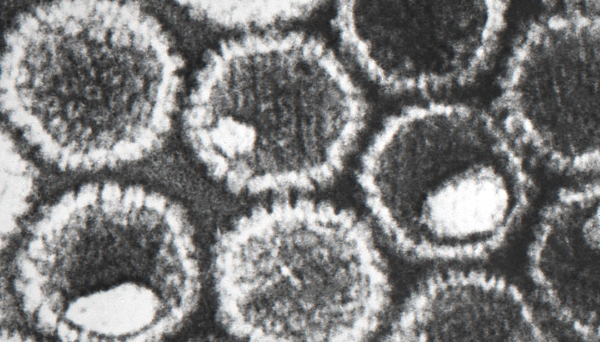 Herpes simplex virus infections are an enormous global health problem and there is currently no viable vaccine. For nearly three decades, immunologists’ efforts to develop a herpes vaccine have centered on exploiting a single protein found on the virus’s outer surface that is known to elicit robust production of antibodies. Breaking from this approach, Howard Hughes Medical Institute (HHMI) scientists at Albert Einstein College of Medicine have created a genetic mutant lacking that protein. The result is a powerfully effective vaccine against herpes viruses.

“We have a very promising new candidate for herpes,” says William Jacobs, an HHMI investigator at the Albert Einstein College of Medicine, “but this might also be a good candidate as a vaccine vector for other mucosal diseases, particularly HIV and tuberculosis.”

The new vaccine was found to be effective against the two most common forms of herpes that cause cold sores (HSV-1) and genital ulcers (HSV-2). Both are known to infect the body’s nerve cells, where the virus can lay dormant for years before symptoms reappear. The new vaccine is the first to prevent this type of latent infection. “With herpes sores you continually get them,” Jacobs says. “If our vaccine works in humans as it does in mice, administering it early in life could completely eliminate herpes latency.” Jacobs and his colleagues reported their findings on March 10, 2015, in the journal eLife.

HSV-2 is a lifelong, incurable infection that causes recurrent and painful genital sores and increases susceptibility to HIV. Also, babies born to mothers with active genital herpes can have a more than 80 percent mortality rate, if untreated. Current estimates suggest that 500 million people worldwide are infected with HSV-2, with approximately 20 million new cases occurring annually. While infection rates in the U.S. hover around 15 to 20 percent, HSV-2 is highly prevalent in sub-Saharan Africa, where nearly three in four women have contracted the virus, contributing significantly to the region’s HIV epidemic. The related virus, HSV-1 is primarily associated with oral lesions, but is a major cause of corneal blindness and infects around 60 percent of the world’s population. Notably, HSV-1 has been increasingly recognized as a cause of genital herpes in the United States and other developed countries.

Most prior attempts to construct a herpes vaccine have focused on a glycoprotein called gD that is embedded in the virus’s outer envelope. This protein is required for the microbe to enter into and out of cells and to spread from cell-to-cell.  gD also elicits a vigorous antibody response that many in the field believe is necessary to produce immunity. However, no gD-based vaccine has proven effective.

“It was necessary to shake the field up and go another route,” says Betsy Herold, a virologist and infectious disease physician at the Albert Einstein College of Medicine and co-study leader of the new research.

As part of a separate ongoing study of the signaling pathway that the herpes virus uses to enter cells, Herold asked Jacobs’s lab to engineer a mutant with gD deleted. Though it was not necessarily obvious beforehand, “once we had this mutant in our hands,” Herold says, “it was a logical, scientifically driven hypothesis to say, ‘This strain would be 100 percent safe and might elicit a very different immune response than the gD subunit vaccines that have been tried.’” The hypothesis followed from the increasing understanding that, in addition to its critical role in viral entry, gD also has the ability to change the host immune response.

In order to test the gD deletion virus as a vaccine, the researchers grew the virus in a cell line that expresses the HSV-1 version of gD. The HSV-2 virus, with gD deleted from its genome, grabbed the available HSV-1 gD proteins from the cell. When introduced to a mouse, HSV-2 was able to use the HSV-1 gD to enter the mouse’s cells. Once inside, HSV-2 replicated abundantly, but because it could not produce gD, future progeny were unable to infect new cells. According to Herold, infected cells then became “little factories for making viral proteins” that spurred the immune system to produce antibodies to HSV-2.

The vaccine completely immunized two common strains of lab mice against HSV-2 when challenged with virus intravaginally or on the skin.  In fact, no virus could be detected in vaginal washes four days post-challenge and even more importantly, no virus could be found in the nerve tissue, the site where HSV often hides in a latent form only to emerge later to cause disease.  Protection against HSV-1, which shares considerable homology with HSV-2, was also demonstrated in both models. The vaccine produced no adverse health effects in a strain of mice with severely compromised immune systems, reflecting the vaccine’s overall safety.

Blood serum passively transferred from immunized mice was found to protect wild-type mice, providing a powerful demonstration of the vaccine’s efficacy. “No one has ever shown for a skin disease that you can protect against infection with passive transfer,” Jacobs says.

Another of the vaccine’s surprises is how it works. Many vaccines provoke the production of so-called neutralizing antibodies that directly bind and inactivate virus particles. The new vaccine, however, induces antibody-dependent cell-mediated cytotoxicity (ADCC) in which antibodies attach to a virus and flag it for destruction by immune system sentinels such as white blood cells. Further evidence that the vaccine triggers ADCC comes from the observation that they lost protection when the immune serum was transferred into mice in which FcϒR, a protein known to facilitate ADCC, is knocked out.

As to why vaccines based on gD never worked, the team thinks that gD, which elicits a strong neutralizing immune response, may have actually been overwhelming the immune system to the extent that the immune system did not see other components of the virus or gD interfered with the ability to evoke ADCC. “Herpes is a pretty smart little virus,” Herold says. “It has multiple immune evasion strategies and this is one of many.” With gD knocked out, the immune system was able to react effectively to the virus’s less dominant components.

The successful implementation of a vaccine based on ADCC could have profound implications for other infections. “It’s possible we could clone into this HSV vector pieces of other viruses, such as HIV, and maybe the immune system would produce the same types of ADCC antibodies for those viruses,” Herold says.

The robust response generated by the vaccine, as well as its novel mechanism, has the researchers undertaking additional experiments in mice to determine whether it can be used to treat individuals already infected by HSV-1 and HSV-2.

The next step for the researchers in producing a herpes vaccine for use in humans is demonstrating its efficacy and safety in an FDA-approved cell line. The researchers are also looking for an industry partner to help make large quantities of the vaccine for future clinical tests.