Every millisecond counts when a fruit fly is being hunted by a damselfly. Janelia scientists find that fruit flies can deploy two escape behaviors, depending on circumstances. 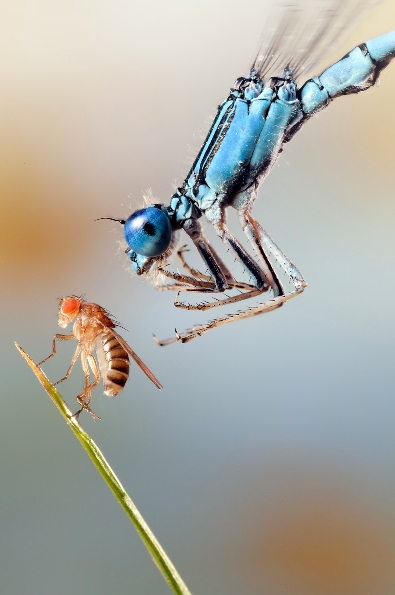 When a fruit fly detects an approaching predator, the fly can launch itself into the air and soar gracefully to safety in a fraction of a second. But there's not always time for that. Some threats demand a quicker getaway. New research from scientists at Howard Hughes Medical Institute's Janelia Research Campus reveals how a quick-escape circuit in the fly's brain overrides the fly's slower, more controlled behavior when a threat becomes urgent.

“The fly's rapid takeoff is, on average, eight milliseconds faster than its more controlled takeoff,” says Janelia group leader Gwyneth Card. “Eight milliseconds could be the difference between life and death.”

Card studies escape behaviors in the fruit fly to unravel the circuits and processes that underlie decision making, teasing out how the brain integrates information to respond to a changing environment. Her team's new study, published online June 8, 2014, in the journal Nature Neuroscience, shows that two neural circuits mediate fruit flies' slow-and-stable or quick-but-clumsy escape behaviors. Card, postdoctoral researcher Catherine von Reyn, and their colleagues find that a spike of activity in a key neuron in the quick-escape circuit can override the slower escape, prompting the fly to spring to safety when a threat gets too near.

A pair of neurons—called giant fibers—in the fruit fly brain has long been suspected to trigger escape. Researchers can provoke this behavior by artificially activating the giant fiber neurons, but no one had actually demonstrated that those neurons responded to visual cues associated with an approaching predator, Card says. She was curious how the neurons could be involved in the natural behavior if they didn't seem to respond to the relevant sensory cues, so she decided to test their role.

Genetic tools developed in the lab of Janelia executive director Gerald Rubin enabled Card's team to switch the giant fiber neurons on or off, and then observe how flies responded to a predator-like stimulus. They conducted their experiments in an apparatus developed in Card's lab that captures videos of individual flies as they are exposed to a looming dark circle. The image is projected onto a hemispheric surface and expands rapidly to fill the fly's visual field, simulating the approach of a predator. “It's really like a domed IMAX for the fly,” Card explains. A high-speed camera records the response at 6,000 frames per second, allowing Card and her colleagues to examine in detail the series of events that make up the fly's escape.

To ensure their experiments were relevant to fruit flies' real-world experiences, Card teamed with fellow Janelia group leader Anthony Leonardo to record and analyze the trajectories and acceleration of damselflies—natural predators of the fruit fly—as they attacked. They designed their looming stimulus to mimic these features. “We wanted to make sure we were really challenging the animal with something that was like a predator attack,” Card says.

By analyzing more than 4,000 flies, Card and her colleagues discovered two distinct responses to the simulated predator: long and short escapes. To prepare for a steady take-off, flies took the time to raise their wings fully. Quicker escapes, in contrast, eliminated this step, shaving time off the take-off but often causing the fly to tumble through the air.

When the scientists switched off the giant fiber neurons, preventing them from firing, flies still managed to complete their escape sequence. “On a surface level evaluation, silencing the neuron had absolutely no effect,” Card says. “You can do away with this neuron that people thought was fundamental to this escape behavior, and flies still escape.” Shorter escapes, however, were completely eliminated. Flies without active giant fiber neurons invariably opted for the slower, steadier escape. In contrast, when the scientists switched giant fiber neurons on in the absence of a predator-like stimulus, flies enacted their quick-escape behavior. The evidence suggested the giant fiber neurons were involved only in short escapes, while a separate circuit mediated the long escapes.

Card and her colleagues wanted to understand how flies decide when to sacrifice stability in favor of a quicker response. To learn more, Catherine von Reyn, a postdoctoral researcher in Card's lab, set up experiments in which she could directly monitor activity in the giant fiber neurons. Surprisingly, she discovered that the giant fibers were not only active in short-mode escape, but also during some of the long-mode escapes. The situation was more complicated than their genetic experiments had suggested. “Seeing the dynamics of the electrophysiology allowed us to understand that the timing of the spike is important is determining the fly's choice of escape behavior,” Card says.

Based on their data, Card and von Reyn propose that a looming stimulus first activates a circuit in the brain that initiates a slow escape, beginning with a controlled lift of the wings. When the object looms closer, filling more of the fly's field of view, the giant fiber activates, prompting a more urgent escape. “What determines whether a fly does a long-mode or a short-mode escape is how soon after the wings go up the fly kicks its legs and it starts to take off,” Card says. “The giant fiber can fire at any point during that sequence. It might not fire at all—in which case you get this nice long, beautifully choreographed takeoff. It might fire right away, in which case you get an abbreviated escape.” The more quickly an object approaches, the sooner the giant fiber is likely to fire, increasing the probability of a short escape.

Card remains curious about many aspects of escape behavior. How does a fly calculate the orientation of a threat and decide in which direction to flee, she wonders. What makes a fly decide to initiate a takeoff as opposed to other evasive maneuvers? The relatively compact circuits that control these sensory-driven behaviors provide a powerful system for exploring the mechanisms that animals use to selecting one behavior over another, she says. “We think that you can really ask these questions at the level of individual neurons, and even individual spikes in those neurons.”