A new discovery shows how wing spots evolved in a species of polka-dotted fruit fly, and underscores the concept that evolution likes to tinker with existing genetic machinery. 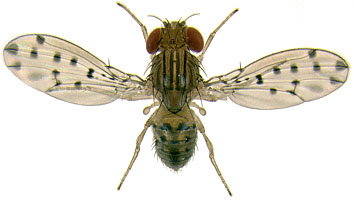 One of the enduring mysteries of the animal world is how colored patterns come to adorn different species’ skin, scales, or feathers. Now, a team led by Howard Hughes Medical Institute investigator Sean B. Carroll has discovered how wing spots evolved in a species of polka-dotted fruit fly.

The new studies show that pigment production in the wing is patterned according to the spatial distribution of a molecule that helps sculpt the shape of the body during development. The finding underscores the concept that evolution likes to tinker with existing genetic machinery to evolve new patterns and forms.

“When nature invents, it does so by using what is readily available,” says Carroll, also a professor of molecular biology and genetics at the University of Wisconsin, Madison. The new report is published in the April 7, 2010, issue of Nature.

Carroll has spent his career studying how evolution occurs at the genetic level, pinpointing many of the molecular changes that lead to new traits and new species. Most of Carroll's discoveries have come to light by studying the common fruit fly Drosophila melanogaster, the workhorse of modern molecular genetics. For the current study, though, Carroll and colleagues focused on Drosophila melanogaster's prettier cousin, a polka-dotted fly species called Drosophila guttifera. Unlike the rather plain D. melanogaster, which has spotless wings, each D. guttifera fly boasts 16 black spots and four gray swatches on each wing. Carroll says the pattern likely evolved to help the flies attract mates or to provide camouflage from predators.

One lesson here is that complexity can be generated in pretty simple ways.

In earlier research, Carroll's group traced the spots on D. guttifera to a pigment-producing gene called yellow. He also found that the wing spots appeared only after a particular genetic switch, called a regulatory element or an enhancer, switched on the yellow protein in specific cells. Regulatory elements bracket the coding regions of genes, and switch a gene on or off in particular tissues or at certain times during development. Much of Carroll’s research has explored the evolutionary role of these switches, finding that small changes in them can account for large differences in morphology and appearance.

For the new study, Carroll and his team discovered that all 16 spots on each wing are produced by a single enhancer region near the yellow gene. This discovery was a “great hint,” says Carroll, that a single molecule might act as an input that triggered the formation of all the spots. “If you had spots in one place governed by one piece of regulatory DNA and spots in another place governed by another piece of DNA, we would have been suspicious that there were different inputs and the pattern was sort of put together pell-mell,” says Carroll. “But the fact that there was one regulatory element made us think that there was one triggering molecule at play.”

Carroll and his team garnered another critical clue by observing their large colony of D. guttifera. As lab workers sorted the flies, they set aside individual flies that had irregular spots. Curiously, each mutant fly with an extra spot also had an extra sensory organ—a motion detector called a campaniform sensillum—under the spot.

Conversely, flies missing a spot were also missing the underlying sensory organ. Carroll concluded that the base topography of the wing—namely its prominent veins and sense organs—provided an underlying pattern that the spots covered over later in the species’ evolution. “Evolution is really painting the spots on top of a landscape that has already been determined,” says Carroll. This observation fueled Carroll’s speculation that a single input molecule —one also involved in the development of the wing structures, perhaps—might be at play in triggering the spots.

Carroll and his colleagues then took the yellow enhancer regions from D. guttifera and spliced them into D. melanogaster to see what impact these snippets of DNA might have on a closely related species whose genetics were well known. The D. melanogaster flies did not develop spots, but the enhancer region produced a distinctive pattern in wings of the developing flies, showing up in the veins and along the edges of the wings. Whatever factor drove the production of yellow in D. guttifera also appeared to be active in the region of D. melanogaster's wing that bore the distinct pattern.

Carroll showed the pattern to two D. melanogaster experts, Seth Blair at the University of Wisconsin, Madison, and Ethan Bier at the University of California, San Diego. They both said, “That looks wingless-y.” That is, the pattern closely matched the distribution in D. melanogaster of expression of a key developmental gene called wingless. Carroll calls wingless “part of the toolkit of animal development,” because it is repeatedly used to help shape the basic body plan of an animal. It is wingless’s job to place appendages in the right spot and ensure that wings develop in the proper location. It is one of the most studied genes of all time, Carroll says, noting that entire laboratories of fruit fly geneticists are devoted to exploring its activities.

To see if wingless triggered the spots in D. guttifera, Carroll and his team isolated the wingless gene in that species and hitched the gene to a fluorescent protein to illuminate where in the fly's body the gene was active. The experiments showed that late in wing development, wingless appeared in the 16 spots. “Whereas Drosophila melanogaster deploys wingless in a certain pattern, D. guttifera deploys wingless in these new areas which correspond perfectly to the polka dots,” says Carroll. “As soon as we saw that, that was bingo, rock ‘n’ roll, eureka, whatever cliché you want to use. That was it.”

At some point in D. guttifera’s evolutionary past, Carroll concluded, wingless took on the new job of turning on the yellow pigmentation gene. Once that linkage was established, producing new spots became as simple as producing wingless in a particular pattern. “One lesson here is that complexity can be generated in pretty simple ways,” says Carroll. “Another is that evolution does a good job of making new patterns out of materials that already exist.”

Carroll says the basic principle of using a single input molecule to determine a complex skin pattern may apply to other insects, too. “I’m not going to say this is the key to the whole kingdom of animal patterns and colors,” he says. “But it’s a pretty good example of a strategy that might be used in the generation of color pattern diversity in ladybug beetles, dragonflies, butterflies, and so on. This is probably a glimpse into the general logic of how it happens.”

He adds that his group's new Nature paper unravels an elegant evolutionary mechanism. “This is what draws a lot of people to biology – the beautiful patterns and the mystery of the origins of them,” he says. “And it’s not that often that we get to peel back the onion and really figure out what’s at the core.”