Researchers lay out evidence for how an unusually efficient enzyme evolved from non-catalytic ancestor proteins. 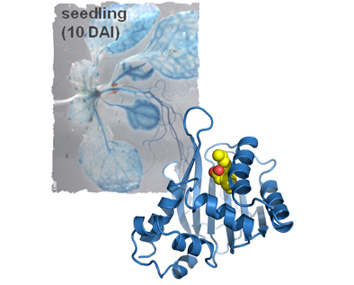 As plants began to transition from aquatic habitats to dry land some 500 million years ago, their needs changed. Those primitive ancestors of modern plants were ill-equipped to survive in a dry, sunlight-blasted world. But gradually, they evolved enzymes that let them synthesize new kinds of chemicals to protect them from the threats of their new world, such as the damaging ultraviolet (UV) rays of the sun.

A new study from Howard Hughes Medical Institute investigator Joseph P. Noel and his colleagues focuses on one of those metabolic enzymes, which today is so efficient at doing its job it is considered by biochemists to be catalytically "perfect." In a paper published online May 13, 2012, in the journal Nature, the researchers lay out evidence for how that enzyme evolved from its non-catalytic ancestor proteins.

This is really cool because it’s one of the best cases for something that was not an enzyme evolving into an extremely efficient enzyme.

Noel, who is at the Salk Institute for Biological Studies, is interested in understanding how today's plants acquired the ability to produce a diverse chemical arsenal - hundreds of thousands of specialized molecules that let plants flourish in varied and sometimes hostile environments around the world. Many of those chemicals are also useful to humans - as drugs, nutrients for disease prevention, flavors, dyes, and pesticides. The enzymatic tools deployed by modern plants must have evolved from protein molecules that ancient plants used to survive in a very different world, Noel explains.

For the current study, Noel and his colleagues at the Salk Institute, together with collaborators at Iowa State University, focused on an enzyme called chalcone isomerase (CHI), which is critical to the production of the specialized metabolites known as flavonoids. Flavonoids, which come in thousands of forms, provide plants with color to attract pollinators, noxious scents to repel herbivores, odd tastes to discourage fungi colonization, and protectants against the bleaching effects of the sun's UV light.

Biochemists have long described CHI as a "perfect" enzyme because its atomic structure is so finely tuned for catalyzing reactions with extreme speed. "As fast as chemicals bump into it in solution or in the cytoplasm of plant cells, CHI makes a flavonoid product," Noel explains. "In an evolutionary sense, it's reached its limit. It's going as fast as it can."

In 2000, Noel's team was the first to resolve the atomic structure of CHI, revealing through x-ray crystallography the precise three-dimensional arrangement of atoms that made it the Ferrari of plant enzymes. "Indeed, their structural and biochemical analyses indicated that the enzyme appeared to have reached its evolutionary limit," Noel says. But in biology, everything comes from something older and probably different.

From where did such a catalytic speedster as CHI arise during the evolution of plants? Back in 2000, Noel could find no obvious precursors in the well studied plant Arabidopsis thaliana. And while CHI itself is central to flavonoid production in most of the more recently evolved green plants, it didn't seem to exist outside the plant kingdom.

In the years since Noel's team revealed the structure of CHI, modern plant science acquired new molecular and genetic techniques. Those advances equipped Noel and his colleagues to search the genome sequences of simpler (more ancient) organisms for signs of a protein related to CHI. They found partial sequences related to the enzyme in bacteria and yeast, suggesting to Noel that CHI had a molecular ancestor in the deep past, before green plants made their way onto dry land.

The scientists next scoured the Arabidopsis genome for sequences that resembled those in CHI, which led them to three members of a family of proteins called FAPs. The FAPs were similar enough in genetic sequence and molecular backbone structure to show their common roots with CHI, Noel reports.

To learn more, the researchers produced proteins from the FAP genes. "During the process, we were taking each [FAP] gene from the plant and inserting it into E. coli and letting the bacteria turn it into a protein that we could work on," Noel remembers. "But unexpectedly these three ancient proteins grabbed a fatty-acid molecule from the E. coli host and they held onto it so tightly that we were able to see this additional molecule in its clutch."

Indeed, when they examined the FAP proteins' molecular structures using x-ray crystallography, they found pockets shaped to clasp tightly to a fatty acid. CHI, in contrast, contains a pocket specifically shaped to grab chalcone and chemically turn it into a plant flavonoid.

Noel's team traced the three FAPs to the plant's chloroplasts, where the process of photosynthesis occurs. Chloroplasts are also the site where fatty acids are synthesized from scratch. Fatty acids produced in the chloroplast are later utilized in the vital accumulation of energy stores in seeds and embryos. Because they are essential to survival, the FAPs are considered part of the plant's primary metabolic repertoire. Flavonoid synthesis, in contrast, is considered specialized metabolism: flavonoids contribute to a plant's long-term ability to pass on its genes under specific conditions in the wild, but are not immediately critical for survival when plants are kept in precisely controlled laboratory conditions.

Although FAPs and CHI play very distinct roles in modern plants, their genetic and structural similarities indicate a clear evolutionary relationship, Noel says. Which is the ancestor of the other? Noel favors the FAPs as the senior party.

Since FAPs contribute to primary metabolism even in algae, the modern day examples of early plant ancestors, they are more likely than CHI to have been conserved by natural selection over more than 500 million years. The fast-moving enzymes that drive flavonoid output likely developed in the more "recent" past, a mere 500 million years ago or so, as plants began their move to a desiccated, UV-bright landscape.

The discovery of a link between two separate players of biosynthesis in plants could have major implications for agriculture, biofuels, and nutrition, says Noel, but it's the evolutionary reunion of these distant biochemical relatives that has him so excited. It's also a nice exclamation point on a decade's worth of work, as Noel's group has doggedly pursued the origins of this key enzyme in the flavonoid pathway. "This is really cool because it's one of the best cases for something that was not an enzyme evolving into an extremely efficient enzyme. We can learn from that 500 million-year-old experiment that nature, not us, has carried out!"