HHMI, the Simons Foundation, and the Bill & Melinda Gates Foundation announce the selection of 84 Faculty Scholars, early-career scientists who have great potential to make unique contributions to their field. 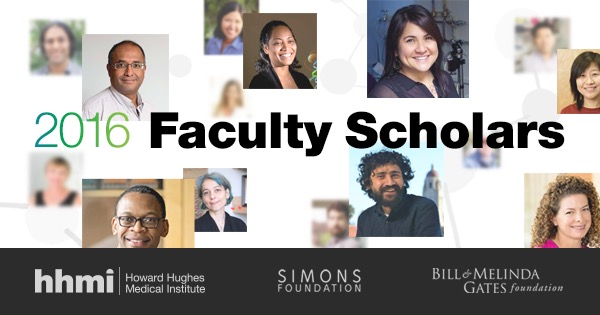 The Howard Hughes Medical Institute (HHMI), the Simons Foundation, and the Bill & Melinda Gates Foundation today announced the selection of 84 Faculty Scholars, early-career scientists who have great potential to make unique contributions to their field. The scientists represent 43 institutions across the United States.

“We are very excited to welcome these accomplished scientists into the HHMI community,” said HHMI President Erin O’Shea. “We’re equally gratified to work alongside our philanthropic partners to help these early-career scientists move science forward by pursuing their bold ideas.”

Through the new Faculty Scholars Program, the philanthropies will spend about $83 million over five years to support the first cohort of scientists selected to receive grants. The range of five-year grant award totals is $600,000-$1.8 million, including indirect costs. The awards are subject to applicants and their institutions fulfilling the requirements of the grant-making organizations. Faculty Scholars are required to devote at least 50 percent of their total effort to the direct conduct of research.

"Support for outstanding early-career scientists is essential for continued progress in science in future years,” said Marian Carlson, Director of Life Sciences at the Simons Foundation.

This is the first collaboration between HHMI, the Simons Foundation, and the Bill & Melinda Gates Foundation. The philanthropies joined forces to create this program in response to growing concern about the significant challenges that early-career scientists are facing. The career trajectory for early-career scientists has become much less certain as competition for grant support intensifies. In the last two decades, the U.S. has witnessed a dramatic decline in the National Institutes of Health research award success rate for scientists, as well as a striking increase in the average age at which an investigator receives his or her first R01-equivalent grant.

In today’s constrained research funding environment, the creativity and energy that researchers bring to starting their own labs can quickly be sapped by the time-consuming and often frustrating quest for grant funding. Within a few years of a new faculty appointment, a researcher's institutional start-up funds typically come to an end. Pressure to secure federal grant money may lead to “safe” grant proposals. As a result, creative and potentially transformative research projects may fall by the wayside.

“This program will provide these scientists with much needed flexible resources so they can follow their best research ideas,” said HHMI Vice President and Chief Scientific Officer David Clapham.

Early-career researchers with more than 4, but no more than 10, years of experience as faculty members were eligible to apply for this competition. Faculty at more than 220 institutions were eligible. Distinguished scientists reviewed and evaluated more than 1,400 applicants on their potential for significant research productivity and originality, as judged by their doctoral and postdoctoral work, results from their independent research program, and their future research plans.

The Howard Hughes Medical Institute plays an influential role in advancing scientific research and education in the United States. Its scientists, located across the country and around the world, have made important discoveries that advance both human health and our fundamental understanding of biology. The Institute also aims to transform science education into a creative, interdisciplinary endeavor that reflects the excitement of real research.

The Simons Foundation was established by Jim and Marilyn Simons in 1994. Its mission is to advance the frontiers of research in mathematics and the basic sciences, and the foundation sponsors a range of programs that aim to promote a deeper understanding of our world. Its life sciences division supports research on fundamental questions in diverse areas of biology.

Guided by the belief that every life has equal value, the Bill & Melinda Gates Foundation works to help all people lead healthy, productive lives. In developing countries, it focuses on improving people’s health and giving them the chance to lift themselves out of hunger and extreme poverty. In the United States, it seeks to ensure that all people – especially those with the fewest resources – have access to the opportunities they need to succeed in school and life. Based in Seattle, Washington, the foundation is led by CEO Sue Desmond-Hellmann and Co-chair William H. Gates Sr., under the direction of Bill and Melinda Gates and Warren Buffett.