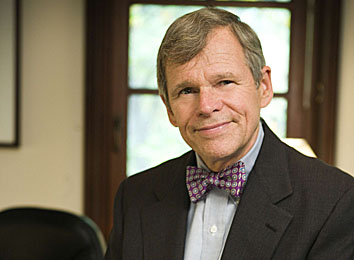 Trained as a geneticist, Bruns joined HHMI after a long scientific and teaching career at Cornell University in Ithaca, N.Y. That experience shaped his approach to science education. Throughout his tenure at HHMI, Bruns led the development of initiatives aimed at putting scientists and discovery research into the classroom at colleges and universities across the U.S. For example, Bruns helped design and establish the HHMI Professors Program, an initiative that awarded leading scientists $1 million over four years to develop more effective approaches to educating undergraduates. Under Bruns’ leadership, HHMI also launched the Science Education Alliance, a national effort to involve undergraduate students in authentic research.

Robert Tjian, HHMI’s president, praised Bruns’ contribution to HHMI and singled out his role in broadening the Institute’s influence on science education at the graduate and undergraduate level. A search is now underway to identify a successor.

Researchers actually like to talk to students about science. Once they realize that’s what you do when you teach—in fact, it may be the most important thing you can do, share your life aspiration—then teaching isn’t a chore.

During Bruns’ tenure at HHMI, the Institute has awarded approximately $730 million in science education grants to individuals, schools, colleges, universities, and other institutions. “Since I came to HHMI, the mission has expanded to include both research and education,” Bruns says. “Many HHMI employees, scientists, and educators have been involved in broadening that mission through the years, and I think that is one of the most gratifying changes since I came here.”

“Peter came to HHMI from Cornell, where he was a professor and an accomplished research scientist. Having experienced the strong connections between teaching and research throughout his academic career, Peter supported and nurtured those connections in the entire portfolio of HHMI education programs,” says Thomas R. Cech, who recruited Bruns to lead the grants program during his tenure as HHMI president and is now an HHMI investigator at the University of Colorado, Boulder.

Bruns recalls a time when research—not science education—occupied his every waking moment. During his first 20 years at Cornell University, Bruns says he was a typical, big university biology professor. “I hadn’t really thought that much about teaching or science education,” he remembers. “I was focused on research.”

His attention began to shift in 1989, when Cornell applied for its first undergraduate science education grant from HHMI. As head of the division of biological sciences, Bruns was charged with finding out what Cornell should do to make science education better—both inside the college and in the local community. “That drove me to concentrate on the idea that we in higher education needed to think about science education in a more organized fashion,” says Bruns, who spent 31 years at Cornell and directed its HHMI-funded education programs during his last 11 years on campus.

Getting Students in the Lab, Early and Often

At Cornell, Bruns’s science education work centered on two areas: student research and community outreach. In the 1980s, working in a research lab was usually reserved for top students at Cornell. Bruns and others were convinced that the best way to attract students to science was to have them actually do science. So Cornell’s science education program focused on opening research opportunities up to more students and bringing the students together so they could talk about their experiences. “I like to say that undergraduate research should be like voting in Chicago: early and often,” he jokes.

Bruns also played a pivotal role in starting the Cornell Institute for Biology Teachers (CIBT), which still receives HHMI funding. CIBT quickly moved beyond its initial focus on teachers in Ithaca, New York and now serves teachers throughout New York State and beyond. It remains a model for training high school biology teachers how to teach science in an engaging, hands-on way.

Bruns knew from his own experience that education is usually not on the radar screen of many top academic scientists, who focus more on research and training students in their own labs. He thought the best way to improve science education at all levels would be to get top scientists to think more deeply about the problem. Who could be better at attracting students into the sciences than active researchers who understand that science is about being methodical, passionate, determined, and creative, Bruns says. “Researchers actually like to talk to students about science,” he says. “Once they realize that’s what you do when you teach—in fact, it may be the most important thing you can do, share your life aspiration—then teaching isn’t a chore. It’s exciting.”

That vision—with support from Cech and members of the Institute’s science education staff—led to the creation of the HHMI Professors program in 2002. But Bruns and his colleagues believed leading scientists could have an equally large impact on another important societal challenge: the dearth of academic scientists at American colleges and universities who are drawn from minority groups or disadvantaged backgrounds. That shared vision led to the creation of the Exceptional Research Opportunities Program (EXROP), which gives promising students from disadvantaged backgrounds the opportunity to spend a summer conducting research in some of the world’s top research labs with HHMI investigators and HHMI professors as mentors. All EXROP students who decide to pursue graduate school are also eligible to compete for an HHMI-funded fellowship.

“The program exemplifies our best, which is not our money but our people,” Bruns says, noting that it helps to have talent scouts among HHMI’s grantees who are able to identify the right candidates. The program has a demonstrated track record: more than 93 percent of 189 students who have graduated from the EXROP program are still in science, and 66 percent are pursuing a Ph.D., M.D., or both.

Bruns and others at HHMI wanted to make sure the Institute’s education program went beyond merely giving grants to changing how science is taught nationwide, so they started the Science Education Alliance (SEA) in 2007.SEA aims to create a network of scientists and educators committed to enhancing teaching and training a new generation of scientists. SEA hopes its first project—a year-long, hands-on genomics course that immerses first-year college students in authentic research—will become a model for integrating research into science education at colleges across the country. Bruns says the project, which is in its third year, has been successful at retaining students in the sciences and encouraging them to become scientists. So far, 789 students at 24 schools have participated. “This really is an experiment,” he says. “The challenge is to figure out what to do next.”

The best way to identify the future of science education may be for HHMI to collaborate with other science education leaders, both to fund programs and to influence policy, Bruns says. That has led him to push for several joint projects, such as the Interfaces initiative, a collaboration between HHMI and the National Institute of Biomedical Imaging and Bioengineering. Interfaces has led to the development of new graduate science programs at 10 universities in the United States that train students who can cross the boundaries between life sciences and physical and computational sciences.

Bruns is especially proud that HHMI’s commitment to scientific research and training extends overseas through a grants effort that he oversaw for most of his tenure. The Institute announced in 2008 that it will establish an international research center focused on research into the devastating co-epidemic of tuberculosis and HIV in partnership with the University of KwaZulu-Natal in Durban, South Africa. Training the next generation of African scientists will be an important goal for the KwaZulu-Natal Research Institute for Tuberculosis and HIV (K-RITH). In addition, Bruns oversaw HHMI’s International Program, which provides support to more than 100 scientists in Europe, Canada, Latin America, Asia, Africa, and Australia.

Although Bruns is retiring from HHMI, he is planning to continue to be active in science education leadership. And while he thinks there has been much progress in science education during his 40 years as an educator—including more students doing research and more faculty expressing interest in improving their teaching—there are still many problems that need addressing.

One of the most challenging, Bruns says, is encouraging reform at colleges and universities, which are traditionally very conservative. “There is a finite world of resources and time, and if we want to do new things we have to understand what old things we should abandon,” Bruns says. “It’s a hard problem, but we’re slowly making changes.”