Scientists have identified a gene that enables wheat crops to fight off stem rust, a dreaded fungus that blights wheat fields with rusty brown lesions and reduces yields. 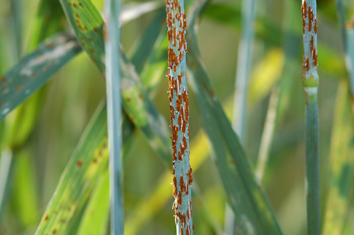 Scientists have identified a gene that enables wheat crops to fight off stem rust, a dreaded fungus that blights wheat fields with rusty brown lesions and reduces yields.

Jorge Dubcovsky, a Howard Hughes Medical Institute-Gordon and Betty Moore Foundation Investigator at the University of California in Davis and Eduard Akhunov of Kansas State University worked for five years to identify the resistance gene in a species of wild wheat. Their findings are reported in a paper online in the journalScience June 27, 2013.

Stem rust has long been the wheat farmer’s adversary. The spores erupt from brownish lesions on infected plants’ stems and drift from field to field on the wind. The most recent US outbreak occurred in the 1950s, when stem rust wiped out 40 percent of the spring wheat harvest. Scientists beat back the fungus by breeding wheat containing a few effective resistance genes.

But stem rust is back. In 1999 in Uganda, researchers discovered a new kind of stem rust capable of infecting wheat strains that were thought to be rust resistant. Since then, the virulent new race, called Ug99 for the year and location in which it was discovered, has spread as far as South Africa and Iran. “Now it is at the doors of the Punjab region [in India], which is one of the breadbaskets of Asia,” Dubcovsky says. “Ninety percent of world cultivars are susceptible again to stem rust.”

Plant scientists aim to fight back with genes that confer resistance to Ug99. In 1984 Australian scientists identified a strain of Ug99-resistant wild wheat and traced its resistance to a gene they called Sr35, for stem rust 35. The chromosome region carrying Sr35 that was transferred to bread wheat is too long and carries other detrimental genes that have limited its use in commercial varieties. Unfortunately, without knowing the precise location of the resistance gene, it is difficult to separate it from the other genes.

Five years ago, Dubcovsky and Akhunov set out to identify the actual gene responsible for the resistance to Ug99, to separate it from other undesirable genes and better understand its mode of action. To isolate Sr35, the researchers crossed stem rust-sensitive wheat with wheat they knew contained the resistance gene. They examined thousands of progeny plants and their genomes, looking for genetic regions that always came along with the ability to stave off Ug99 infection. By examining the genome more and more finely, they were able to narrow their sights to a short stretch of DNA, which they sequenced and found to contain just four genes.

Then the team asked which of those genes was necessary for stem rust resistance. They compared different natural varieties of wheat, some of which were resistant and others sensitive. Only one of those four genes contained sequences that were always present in resistant wheat, and always absent in sensitive wheat. They transferred this gene, called CNL9, into sensitive plants using transgenic approaches and found it enabled them to block Ug99. And when they mutated CNL9 in resistant strains, the plants suddenly succumbed to the fungus. All of this work allowed Dubcovsky and Akhunov to make a simple but strong conclusion: “This is the gene.”

CNL9, or Sr35 as it may now be called, is part of a large family of disease resistance genes in plants. These act somewhat like antibodies do in animals; they recognize intruders and signal cells to fight back. While current commercial wheat varieties possesses many resistance genes, most of them lack the one that recognizes and responds to Ug99 and related fungi.

In a companion paper in the same issue of Science Express, researchers at the Commonwealth Scientific and Industrial Research Organisation in Australia reported on the identification of another stem rust resistance gene, Sr33.—Now that researchers have identified Sr35 and Sr33, they should be able to directly transfer those genes into domestic wheat, without any tagalong genes that could decrease yields. They can be also transferred together in a single resistance cassette, which will facilitate the simultaneous breeding of both genes.

In the meantime, Dubcovsky and Akhunov plan to useSr35 as an entry point to better understand how resistant plants dodge stem rust. For example, what protein from the fungus does Sr35 recognize? Does it find that bit of stem rust inside the plant cells, or catch it before infection takes place? What immune processes does Sr35 activate in the presence of stem rust? Right now, scientists know little about how plants resist the disease. Sr35 and Sr33 are the first stem rust resistance genes to be identified and sequenced. “We can start to understand how the disease works,” Dubcovsky says. “If we understand it, maybe in the future we can synthesize artificial resistance genes.”